The morning began with a single ripe strawberry. Then ice espresso with a dash of milk and a single egg omelette with today's garden finds: 2 asparagus spears and some watercress. 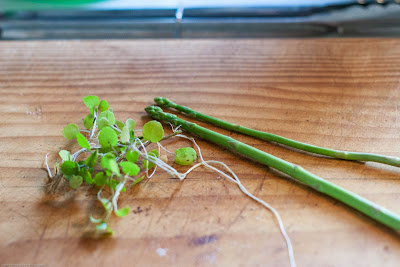 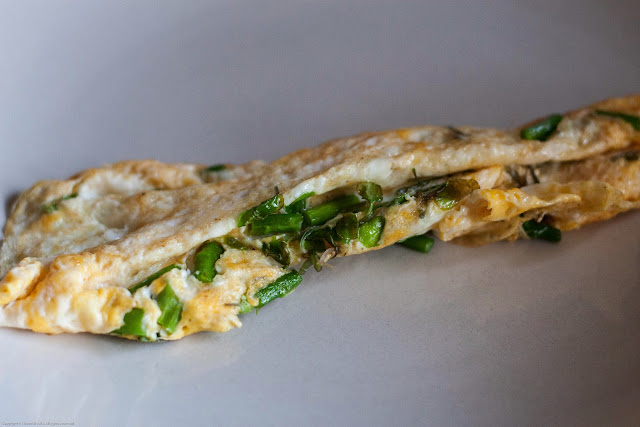 Then I headed down to Greenough to purchase some extra virgin olive oil from my friend Beth at Bentwood Olive Grove. I just refill my 3L can each time. $24 spent. Had a cuppa and a chat and a couple of mint slice cookies. I am always tempted by chocolate... 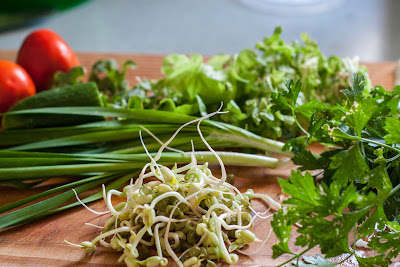 Back home I had a handful of nuts and soon enough it was lunchtime. Off to the vege patch for lettuce, chives, tomatoes and parsley. Add half a cucumber, a slice of haloumi pan fried in olive oil, a handful of mung beans, another of cooked chickpeas, a spoonful of fried shallots, olive oil and vinegar. Nom nom. 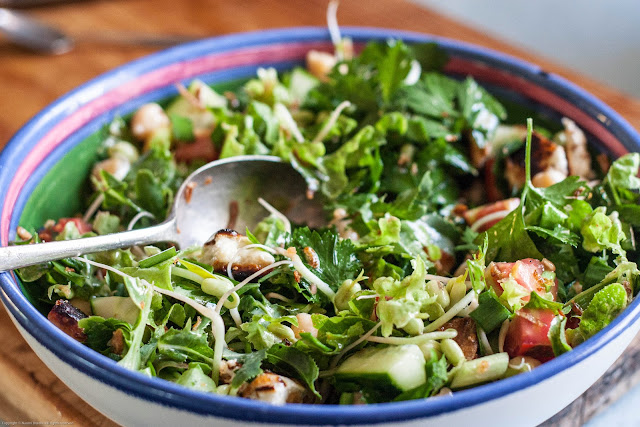 Then I had an appointment at Coronation Beach with a nice rolling 3m swell and a good southerly. Perfect 4.5m sailing, with some nice clean waves for some awesome turns. Sailed down at windmills so had the waves to ourselves. It gets very tiring riding wave after wave after wave after.....

Had a handful of nuts on the way home (love ziplock bags) and then dinner.

A few months ago I bought a box of 30 packets of 2 minute noodles for $15. The seasoning sachets are suspect, so I usually throw them out and just use the noodles. Here are the ingredients for my beef noodle soup. 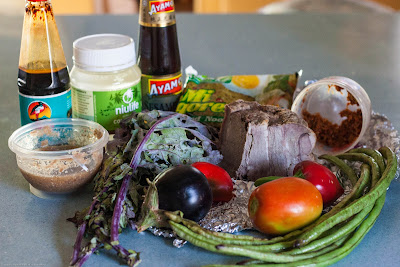 In a large saucepan boil some water and cook the noodles. This only takes a few minutes. Don't drain the noodles but use a sieved scoop like they do in Asia, so you can still use the noodle water in your soup. Same as pasta. In another saucepan put coconut oil, stock concentrate and thai chilli paste and cook for a minute to bring out the aromas before adding chopped vegetables. For this soup I used snake beans and kale (both a bit old from the market 2 weeks ago), and eggplant and red capsicum freshly picked this morning. I decided against adding tomato. Cook veg till just soft, adding noodle water as needed. Then add cooked beef. The beef is a rolled roast I cooked earlier in the week. A small slice chopped into cubes suffices. The stock concentrate is the juices and onion left in the bottom of the pan when I roasted the beef, which I pureed in the blender and froze in small portions. A spoonful in my noodle soup is enough. Toss the beef around, throw in the cooked noodles and then plate up in a bowl. Now add mung bean sprouts and some chickpeas, and season with a dash of sesame oil and kecap manis (sweet soy sauce from Indonesia). Add some more noodle water so you have a small amount of liquid in the bottom of the bowl. This allows you to mix everything up well and coats everything with the yummy flavours. 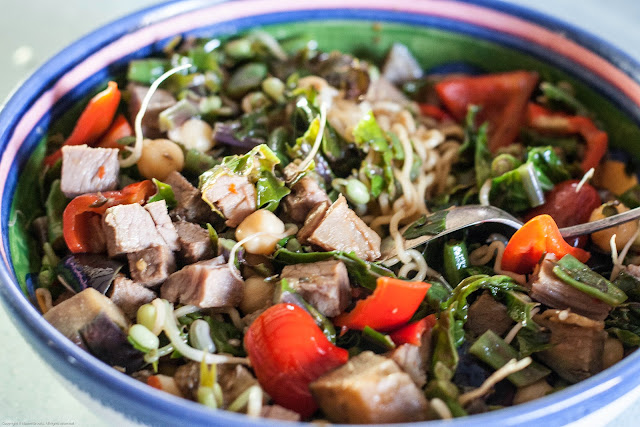 Money spent on food today: $24. Should be a few months till I need more olive oil...