We returned to Hanoi on the overnight train, arriving to clear skies and sun. What a change! We then join another tour with a new guide and driver and head north again, but this time to the Northeast. Our trip for the next 2 weeks follows the Chinese border, taking in a few more ethnic minority groups, and includes an 8 day trek.

Joe has rallied and is feeling much better as we bowl along the winding roads at breakneck speed, rolling from side to side, to our hotel in Hagiang. A seatbelt makes no difference and it's one of those times when a ride is more comfy if crammed shoulder to shoulder in a local bus. Our guide Hoang pronounces his English with a thick Vietnamese accent which makes him very hard to understand, and over the next two weeks becomes increasingly frustrating. 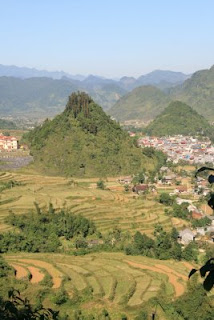 Hagiang and Dong Van region is limestone mountain country, inhabited by Hmong and Dao people. Tay live in the valleys. We chance upon an awesome local market where the colourful women are drop dead gorgeous. Some are fascinated by my white skin, and the Dao women are keen to look at my jewellery. I return the interest by checking out their jewellery! 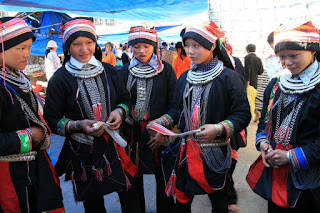 The mountain passes are steep, winding and very photogenic. Somehow the locals eke out corn crops on the rocky mountainsides, though the government does financially support them as they are unable to grow enough food. Dong Van Pass, between Meo Vac and Dong Van indeed lives up to the hype as one very picturesque part of the country. 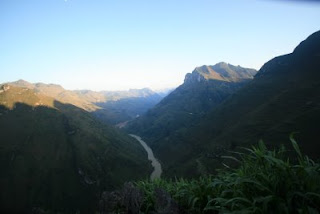 Now a visit to Hmong territory isn't complete without a drink with the locals. We spy a group sitting by the side of the road so we stop to join them for a few drinks. This is where I master the Vietnamese saying for "bottoms up", and here the cups of corn wine are bowls. Soon Joe and I have lots of new brothers and sisters! 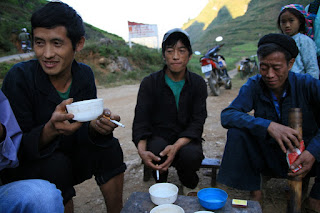 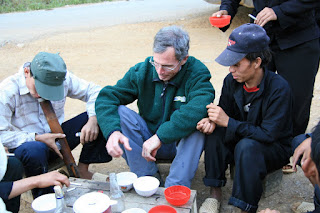 But Joe isn't feeling well again, and by the late afternoon he is too tired and sick to even go for dinner or a walk around town. I wander the back streets but Dong Van isn't much of a town unless there's a morning market on. 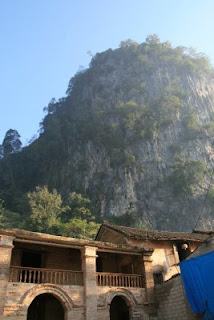 From Dong Van we return to Hagiang via a different route, with the promise of a visit to another authentic market. We visit the house of a former Hmong King, but the promised markets has been cancelled in favour of a larger one tomorrow in Dong Van. I am disappointed, but buy some cute Hmong caps at the gift shop to make me feel better. 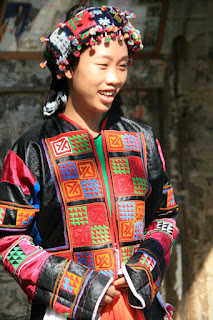 The highlight of the day is a stop in a dusty little village in the middle of nowhere. Our guide informs us that Lo Lo people live here but don't wear their colourful costumes daily as they are impractical for field work and the predominant local group is Hmong. We go to a house and one of the girls dresses up in this beautiful clothing which is handmade, dyed, embroidered, appliqued and then embellished with beads and pom poms. Mindboggling stuff! 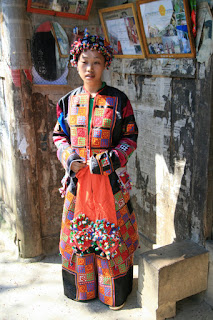 Further up the road are Hmong women shirring the skirts that they wear - the amount of time spent making their clothing really shows how much they still value their culture, as it would be so much easier just to buy readymade clothes. 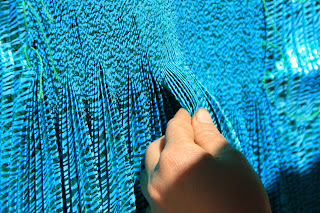 Joe is becoming increasingly dizzy and fatigued and has decided to return to Hanoi for medical tests. We go for dinner at a Hotpot restaurant where the ingredients in the pot vary from normal beef, to offal, to veges including yummy mushrooms, to noodles. It all tastes good so I try not to look too hard at what I'm putting in my mouth. But not really the sort of meal for someone struggling to eat anything.

Joe returns to Hanoi while I continue on east. It turns out he did have Dengue fever, and after a week of rest and the return of his mammoth appetite he has headed south.