It seems really weird to be so deep into planning a 3 month trip to Indonesia in March when I have a big exciting ski trip to Japan in just over 2 weeks time. But aside from a mere detail like all the documents for the trip still outstanding I'm all packed and ready to go. I rang the travel agent last week and explained that sending stuff to me in deepest darkest regional WA is fraught with the real danger of it not turning up in time. Turns out she can indeed email me everything except some vouchers, and since she's joining me on the trip she can courier them to Japan herself. Sorted!!

But see, once I get back from Japan at the end of Feb I only have 2 weeks to get an Indonesian visa and pack the backpack (mostly packed already anyway), and absolutely no time to plan my route.

The scenario is this: Visit the string of islands at the eastern end of Nusa Tenggara Province and explore them extensively. Allow myself 3 months to do this. But: I need to be in one of three places within the region that has an Immigration Office after 2 months so I can renew my visa. Some islands I will be visiting only have weekly ferries, and I don't want to do too much backtracking. I also want to avoid the high season for tourism, which is June to August, but since most places I'm going are well off the beaten track the only place I expect to see other tourists is Flores.

At present I have a one way ticket to Maumere, in the eastern portion of Flores. Here's a little map so you can get an idea of where I'm going. Australia, BTW, is not too far south from Rote, but unfortunately there are no longer any flights between Darwin and Kupang. 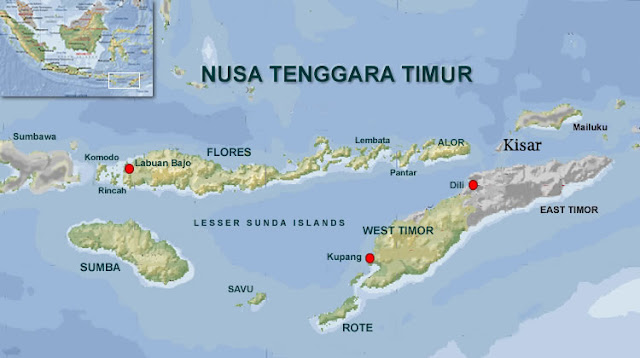 The reason I am beginning in Flores is because at the very eastern tip is a town called Larantuka which has a 500 year history of Portuguese Catholicism and holds a really fascinating Easter Procession on Good Friday. Which will occur about a week after I fly in, giving me time to check out the Maumere region before heading up there. There's some interesting villages, many markets, ikat weaving, snorkelling and diving, and even a couple of volcanoes to climb.

After Larantuka I'll be ferry hopping my way through the Alor Archipelago to Kalabahi. There are traditional villages, pristine beaches, world class diving, at least 2 decent volcano climbs, and a village that still hunts whales traditionally.

From Kalabahi I'll be taking a ferry to Atapupu in West Timor, allowing me to make my way slowly by road eastwards to Kupang. More traditional villages, ikat weaving, lots of markets and another mountain to climb.

From Kupang plans get a little sketchy as they are totally dependent on ferry timetables which are notoriously unreliable due to the treacherous oceans the boats have to negotiate, and why so many surfers visit this region. Dependent on ferry schedules I hope to visit the islands of Rote, Savu and Sumba, but will probably travel from Savu to Ende on Flores, explore the rest of Flores in an eastwards direction, pick up my visa extension in Labuan Bajo then jump on a ferry to Sumba. That way I'm not sweating on getting back to Flores for my visa and can enjoy taking my time on Sumba. From Sumba there's a boat to Sumbawa, the next island to the west of Flores.

OK, I missed the Komodo islands somewhere in there didn't I? Been there, done that, on a dive liveaboard back in the mid noughties. I'm interested to see what Labuan Bajo looks like these days, as it was a dusty little frontier town last time I was there. I've heard it's gone upmarket, got flash hotels and restaurants and just a little bit "Bali". Ah well, after the privations of 2 months in the sticks it'll be a welcome respite for a few days.

Once I'm in Sumbawa I'll be winging it depending on how much time I have left before my return flight mid June. I'd dearly love to climb Tambora, we shall just have to see...

So, now that I have pencilled out a route that will fit my criteria, I've got little else to do as far as travel planning.

Now I can start to get excited about my upcoming ski trip to Japan. A full month of powder skiing, it's gonna be awesome!!

Needless to say, I am limiting my heavy lifting (though there are a few big rocks I need to manoeuvre around to get the pond and waterfall finished before I leave), I am madly doing squats, lunges and balance/core exercises, and I am being a little frustrated by this totally weird weather we are having here - there has been NO WIND this year and there's NO WIND forecast for another 3 days, and then only for one day then more hot weather forecast. Geez I'd be pissed off if I'd chosen these 2 weeks for my windsurfing holiday, something many overseas and interstate visitors do!

Then again, if there'd been wind, maybe I wouldn't have had time to do my research. Now I feel ready to head off!