As usually happens this time of year I ask myself why I bother to try and grow anything in the vege patch, because the dry winds and heat make it a difficult job for plants to survive. Slowly my soil has improved, but it remains somewhat hydrophobic still, meaning daily watering continues to be a necessity.

Shade makes a huge difference, but because there are lots of gaps and overlaps, some plants still manage to get fried within the couple of hours of direct sunlight they receive each day. Greenhouses just encourage pest epidemics, I'd rather have my many feathered visitors helping out thank you. 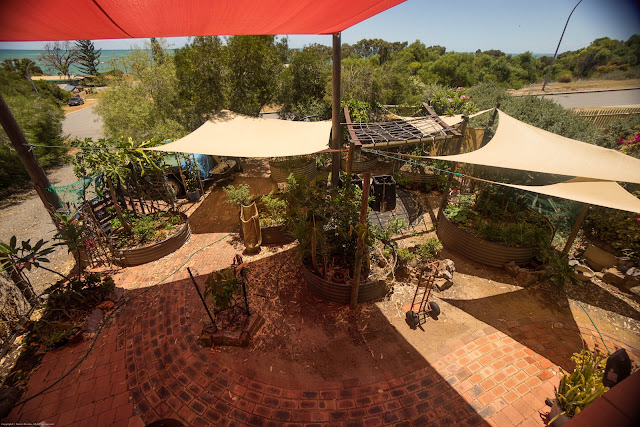 So what's made it? Well not a lot.

All the cucumbers succumbed pretty quickly, as did the snow peas, but some hardier beans are growing in their place. The baby corn refused to ripen, and what did ripen was tasteless. 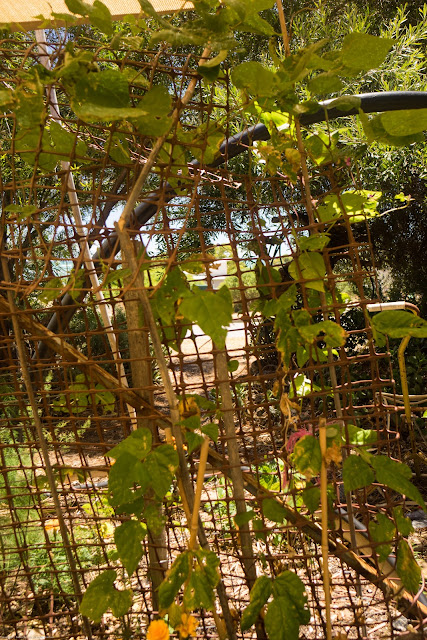 The eggplant seedlings are all just hanging in there or dying. The one plant that I grew from seed over a year ago produced fruit that stopped growing at somewhere between golf ball and tennis ball size. It actually makes a handy single serve portion, but I'd prefer they grew a bit bigger given the effort that's gone in to producing them. But now, even that plant has lost its leaves and is looking like dying. 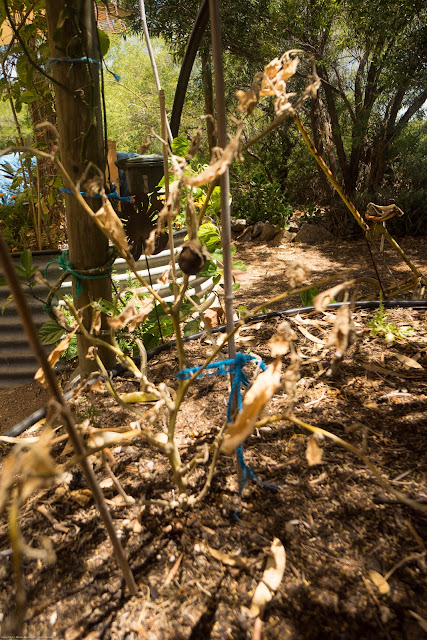 None of the pumpkins did much. I managed to pick a few tiny fruits which made single serve portions in the kitchen, but the heat and powdery mildew meant few survived. I still have a couple of vines struggling, but no fruiting going on. 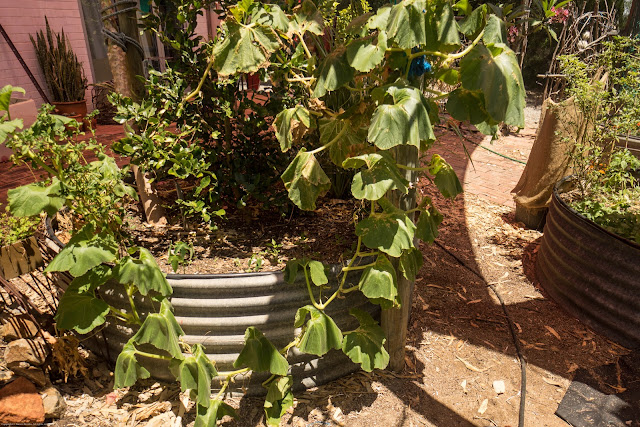 Neither passionfruit shows any sign of fruiting. I've noticed the occasional flower, but no fruit. I might try some potash... 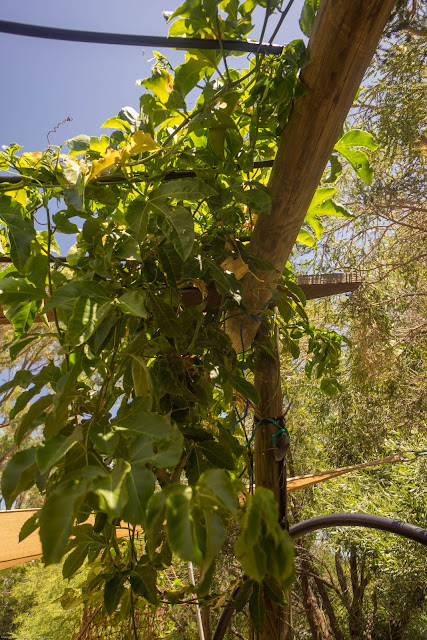 Tomato plants grown from seed are doing well so far. They are all in the shade and well protected. My older tomato plants are all finished, so there's a bit of a gap. Never mind, I cooked and bottled most of the excess of a couple of months ago, so I've not been without so far. 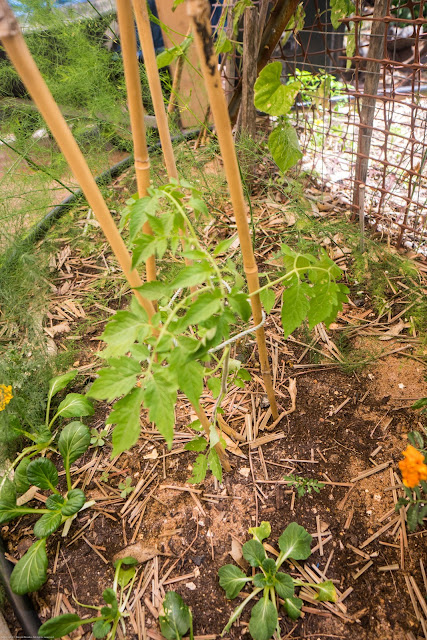 The asparagus has been good this year, and I've managed to eke out a steady crop until now. Once their growth accelerates with the heat you just can't catch them in time before they unfurl their little ferny foliage.

I had another go at Okra. Again, the results were shabby. All the seeds sprouted, but then shrivelled up and died at the 2-4 leaf stage. I've bought some more seed of a different variety so might have another go. You've got to be an optimist to be a gardener...

The kumara is doing well though. I regularly snip the trailing new growth as it makes a good spinach alternative in stir fries. Gotta use what you've got, especially when the perpetual spinach my house sitters put in just shrivelled up and died. 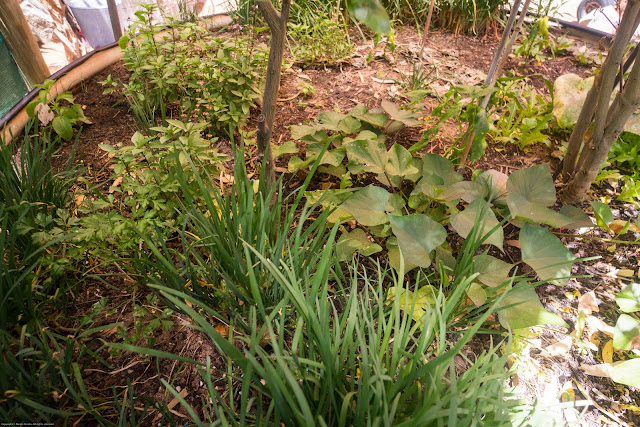 Talking about using what you've got, I've discovered a new superfood. It's called papaya. Not only can you eat it when it's golden and ripe, but it's also perfectly edible when unripe as well. 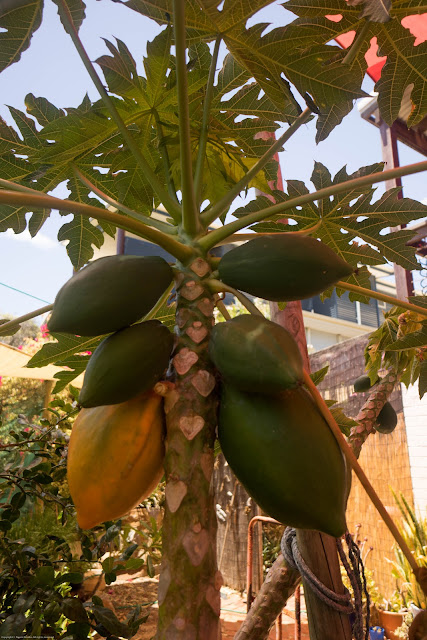 I was first introduced to green papaya salad at the Rapid Creek Market in Darwin when I lived there. Rapid Creek Market is the closest thing to an authentic Asian market outside Asia. Seriously, rock up there at 7am on a Sunday morning and you'd be excused for thinking you'd been teleported to Thailand. I wonder if anyone grows durian up the top-end? Anyway, Som Tam is a classic Thai salad from the Isaan region of Thailand, and it's crunchy, spicy and delicious. It uses grated raw green papaya, chilli, lime juice, garlic, tomatoes, dried prawns and peanuts to make a simultaneously refreshing and perspiration inducing experience. I love Asian cuisine.

I got a little sick and tired of making green papaya salad with the many green fruits from my trees that drop before they ripen. It's fiddly, and requires quite a few ingredients on hand in the pantry. And sometimes I don't feel like salad. So I started using it in different ways. Like roasting it.

It turns out that green papaya behaves somewhat like potato, in that it's a starch that softens with cooking and will take on the flavours of things added to it. I often add it with other veg like pumpkin and eggplant in a roast, and recently I made spicy papaya wedges. Yes, it was freaking delicious. 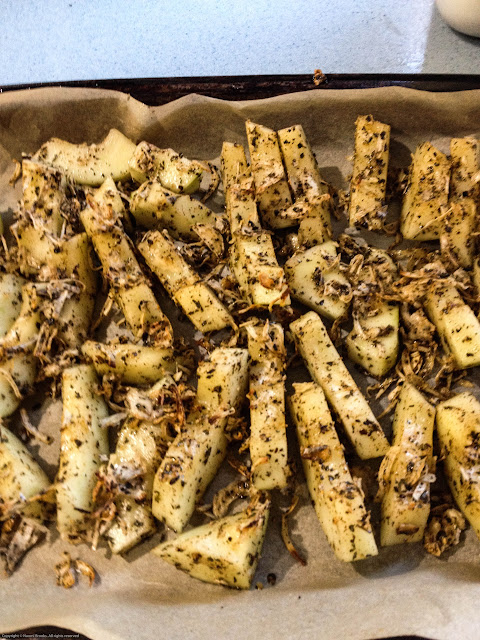 Now papaya grows like a weed in my garden. Until recently I had four female trees all fruiting, but one has fallen over due to the trunk rotting out and will be in the compost bin pretty soon. I'm jusr waiting for the final fruits to either ripen or drop. I also have 2 male trees, whose flowers I use to manually pollinate the lady flowers, just in case nature doesn't do its job.

A month or so ago I threw some chia seed into a box of home made compost to grow some chia plants and harvest my own chia seeds. Instead I ended up with a huge amount of papaya plants germinated from the compost! I figure I might as well plant a few more trees, and pull out any that end up being male, because it's such a versatile fruit for the kitchen, and it grows here so easily. I mean why fight nature right? 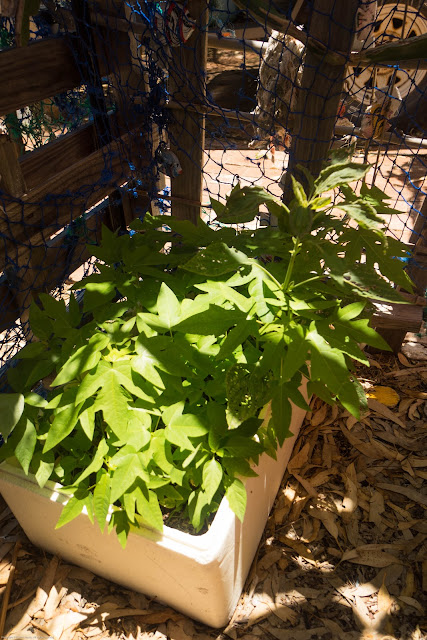 As mentioned, I also have many ripening papayas. So far I've made papaya ice-cream, dried papaya, and frozen yoghurt. Not yet tiring of this amazing fruit.

In other fruit news, the dragonfruit is fruiting. The main big red plant had at least a dozen flower spikes though some of them dropped before flowering, and the white put out a solitary flower, which, because there is nothing for it to cross-pollinate with, then dropped its fruit before it developed. I'm not that fussed, as the white dragonfruit doesn't have much taste compared to the red. Sometimes its OK to grow something just for the aesthetics... 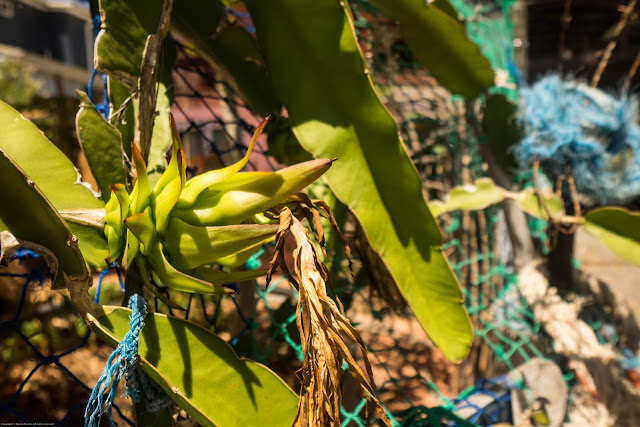 The mango tree looks magnificent. There will be fruit, in another 5 years.... 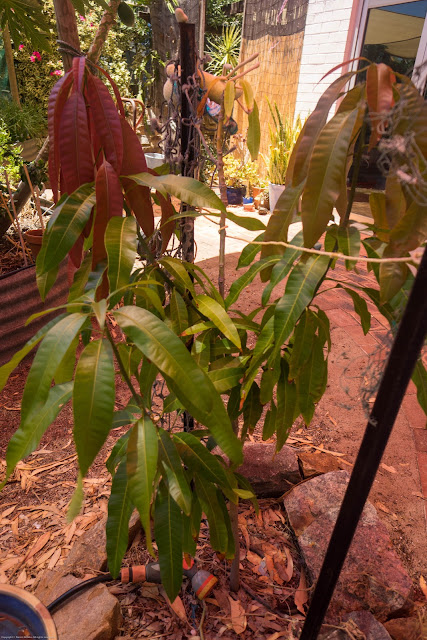 I completely forgot about the water chestnuts last year. They've multiplied and are currently growing well in the small pond next to my green rainwater tank. Must remember to harvest them in June. The watercress and kangkung are also happy in there, along with a resident frog or two. 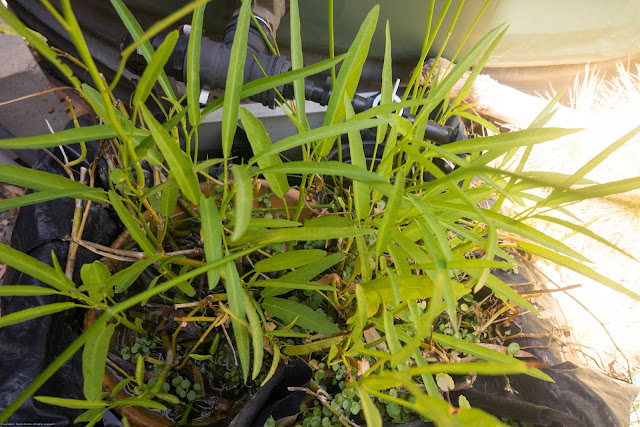 I've been working on the pond and waterfall, trying to make it waterproof and also mortaring the stone surrounds to hide the tyres. Getting it to a waterproof state was quite an effort, involving lots of silicone and a number of efforts at getting the water to not run off in the wrong direction. I did get a little help moving the rocks, but mostly I did it myself. Yes, NOT what I should be doing just before a ski trip. I know..... 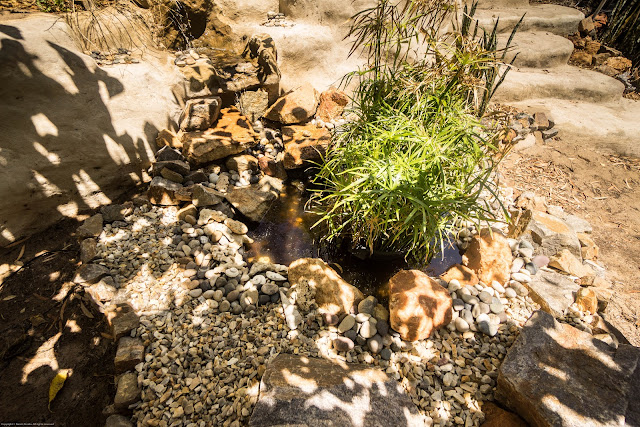 I purchased some goldfish to eat the mosquito larvae breeding in the pond. Then some predator went and ate them. One day there were six fish, next morning there were none! I need to give them some good hidey holes before I get any more me thinks. 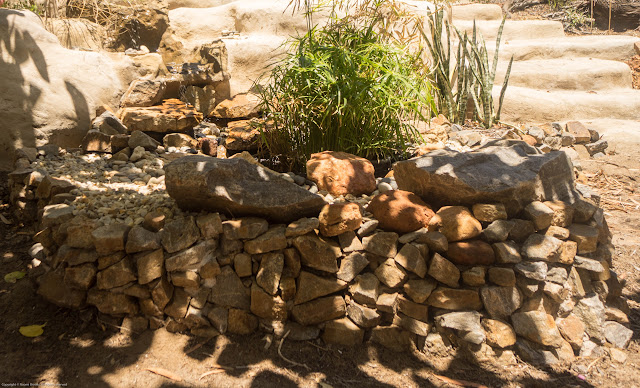 Here's a little video of the pond and waterfall before I fixed the latest leak....


The chooks, by the way, are just gloriously healthy. They are fat and happy, very sociable, and laying well, despite the heat. I've been giving them a bit of extra meat meal in their feed and they just look absolutely luscious at the moment. I've never owned such happy healthy chooks before. They are still confined to the upper pen, which has heaps of shade and easy access to the water tank, so I'm not planning on moving them down into the other run any time soon. Besides, I haven't fox proofed it yet. 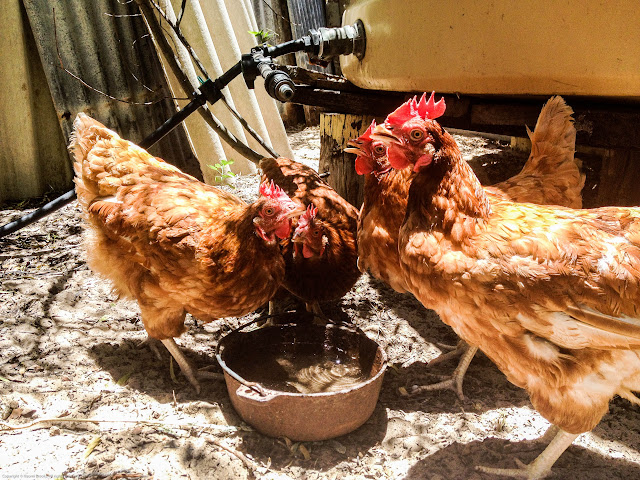