What a strange couple of days I had.

After the Good Friday Procession I was quite exhausted. It had been so full on, and the weather wasn't obliging either. I'm starting to think I prefer cold snowy weather to this infernal heat and humidity. It also didn't help that after 3 months without a period I started menstruating.

Suffice to say, I was looking forward to holing up in a hotel for a day whilst I got over the first heavy day of bleeding, to have numerous showers and lie in front of a fan to stay cool. Unfortunately, that didn't happen, here's what did.

After an emotional farewell from Ritha's family, Ritha gave me a lift down to the pier on her motorbike. I stocked up with biscuits and water and boarded the ferry to Waiwerang, the main town on the nearby island of Adonara. It was an easy crossing, but the views were marred by heavy downpours of rain, necessitating closing the windows and turning the interior into a sauna. Seriously unpleasant. At Waiwerang a friendly chap showed me where the two hotels were, but unfortunately, both hotels were full. People from Jakarta here for the celebrations, but yet to leave again. Oh dear!! 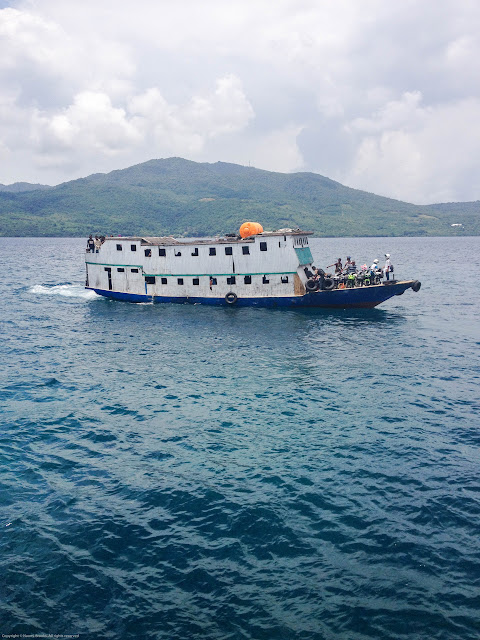 Then a chap called Bernard showed up, and offered if I wanted to do a homestay in his village. Given the circumstances I had little choice but to agree, I mean where was I going to sleep if I didn't take advantage of people's hospitality? After a toilet stop, I hopped on the back of Bernard's bike and we drove to his village. It's in the inland portion of the island, dry according to him, but still looks pretty green to me. Dry is where I come from!

I meet his wife, daughter and mother, then go for coffee at another family member's house. This is where I will sleep as there is no room in Bernard's small house. We have coffee and cake and watch some men playing cards and gambling. Then we head over to the neighbour's, where a bunch of young men are sitting around shooting the breeze, drinking locally brewed Arak, and eating dog meat. 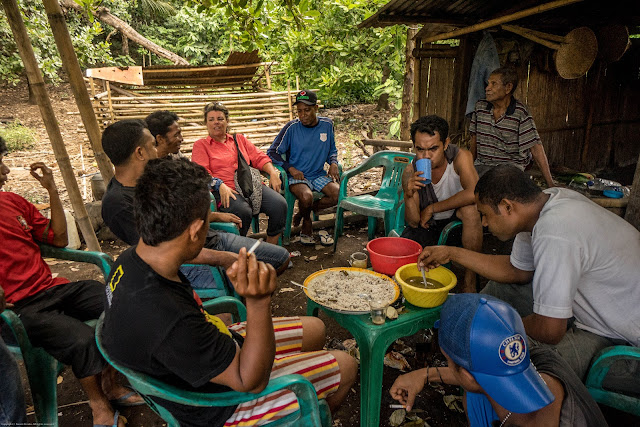 Dogs are quite well cared for family pets around here, as are cats, just they get eaten when they get old. No room for sentimentality when protein isn't easy to come by. We forget this in our pampered world of supermarkets and choice about what cuts of meat we will eat. Here, there are no such luxuries, so I try a little taste, but it's gristly and not particularly pleasant tasting. Anyway, they need the protein more than I do!! They certainly do tuck in with relish.

After 2 glasses of Arak, it's spicy and quite strong, we head off to see the church, ho hum, and to visit the village head, to discuss climbing Ili Boleng, the reason I'd come to Adonara in the first place. Only now I was thinking I wouldn't be doing anything strenuous for a couple of days, as my period was turning out to be a little heavier than usual, making me rather uncomfortable. 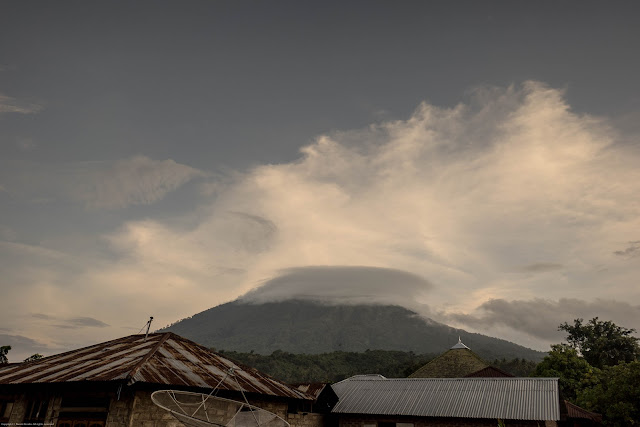 Sorry if this is an unsavoury topic for some, but this is the reality for women, that we have to deal with menstruating when we travel, and it can seriously interfere with our plans. Many years ago I began using a silicone menstrual cup, which is inserted into the vagina and catches the flow. Because it's a non absorbent method, it's much safer than tampons as there is no risk of getting toxic shock syndrome, meaning you can leave the thing in for extended periods, as long as it doesn't overflow. It is simply removed, emptied, rinsed and reinserted. This is a godsend in countries without adequate garbage disposal services, as all you need is water.

Bernard is friendly enough, but he makes me feel uncomfortable. He wants to be my Facebook friend, which I am fine with because I can always delete him again, and then goes through all my profile pictures which I find a bit creepy. He has a certain self assured pomposity to him, and he refuses to contemplate me returning tomorrow. As I have no choice for the night, I let it ride, and decide to see how things pan out overnight.

I have a dreadful night. My room and bed are fine, there is even a mosquito net to use, but I am bleeding heavily and need to empty my cup every few hours. I run out of clean underwear, I stain the sheets, I need to use my towel as a pad, and luckily there is a sarong in the bedroom that I can wear because I run out of clothes to wear on my lower half! And in the small periods I manage to sleep, I am woken once by some late night revellers turning up wanting to buy phone credit, and then at 4am by my body wanting to do a shit! At six am I am woken yet again by Bernard wanting to take me to see a traditional market! He gets told no!

I get up and pack my bag. I decide that if Bernard won't take me back to Waiwerang I will find someone who will. When I surface I must look absolutely frightful. I tell Bernard I have been unable to sleep and then continue to milk my situation by almost falling asleep over my morning coffee. Bernard at last concedes, and rings the hotel to book a room for me, and we head back in to town.

I offer Bernard some money for the homestay, for which he is suitably vague and accepts 50,000Rp, which seems reasonable for one meagre meal, 2 coffees and a bed for the night. I tell him that when I feel better I will ring him and maybe return to the village, and then we can visit beaches and climb volcanoes. He then asks for 100,000Rp for fuel, which seems excessive, as motorbikes run forever on very little fuel, and a full tank would probably cost less than 50,000Rp. Or perhaps that's what he thinks his services as an ojek driver are worth. I give it to him, deciding at that point that I won't be returning to his village, that I have had enough of this annoying man and his weirdly aggressive friendliness.

I understand that there are cultural differences, and that unemployment is high, but I would appreciate when people offer to help that they are upfront about how much of that help they expect to be paid for. I didn't ask for Bernard to be my guide for a few days, I simply took advantage of his offer of hospitality when I needed it, and was totally prepared to pay for it. What I wasn't prepared for, was to feel bullied into staying longer in a place I didn't wish to be.

I retire to my clean, fan cooled room at the Hotel Asri and say goodbye to Bernard. I tell him I will ring him when I feel better. I know I won't.

I shower, rest, and update my blog. I have the sort of day I wanted yesterday, just to chill and gather my wits and strength for the next part of the adventure. I wander down town to get some lunch. One young kid skids his bike at me, not once but twice. Oh for a stick to put through those spokes! Even the adults swerve their bikes toward me when saying hello. One young man stops and insists I get on the back of his motorbike. I refuse, many times. He goes away, comes back and tries again. No way am I getting into another Bernard situation. I turn around and head back to my hotel. 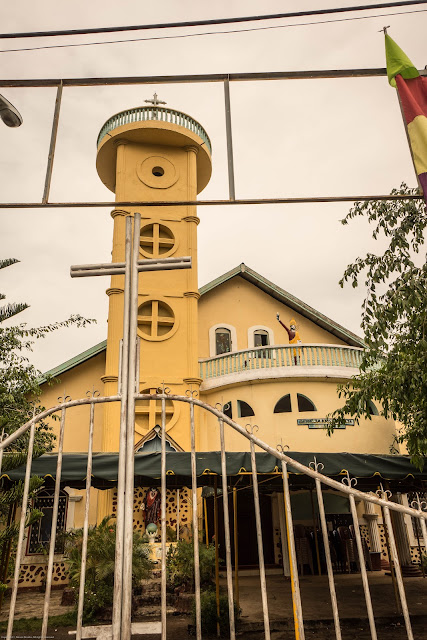 I pass by the pier and inquire as to ferry departure times for Lewoleba. Reading my guidebook it looks like there's much more to do on the next island Lembata, and my body isn't up to climbing a mountain in the next few days, so I'm best to move on. I won't be letting Bernard know my plans, I have a sneaking suspicion he would come and try and persuade me to stay.

On the ferry the next day my phone rings. It is Bernard. I don't answer it. I am surprised at how uncomfortable not just Bernard, but the people of Adonara made me feel. Though outwardly friendly there was a strange aggression to them. I didn't feel relaxed with them at all.

Lembata, however, is completely different. These are my kind of people!