You may remember that I am not a fan of travel days: the inevitable long voyages that doorstop both ends of a travel adventure. Whilst some people revel in the expectation of new experiences, or the joy of returning home, I struggle to view these days as anything more than hell. Not only do I suffer from anxiety that I'll miss my plane, I find the long waits in airports, the lack of friendliness that comes with plane travel, and then the annoying ripoffs of transport mafia at your destination just so interminably boring. It's the same, it never differs, no matter the destination.

This time I take 3 days to get to where I would consider the start of my adventure, in the town of Maumere in eastern Flores. It started Monday morning with a lift to the airport in Geraldton by my housesitters, or rather, it started with me waking at 5:30 am and then being ready well beforehand and panicking that the vegetable oil fuelled van they were taking me to the airport in would break down. I know it's crazy, but we all have our quirks hey? I then boarded my flight to Perth, arriving around 9:30am, where I was able to take advantage of the new bus service from T1/T2 into Perth city. I got off on St Georges Terrace, dropped in to the Indonesian Consulate to pick up my passport with its 60 day visa, then walked up into town to have coffee with my next door neighbour.

She's no longer my neighbour since she left home over 2 years ago to go to Uni in Perth, but I haven't seen Maddy for ages so it was lovely to catch up and find out what this beautiful young lady was doing with her life. Having spent a lot of time with the kids next door over the years, including taking them camping every Christmas/New Year when they were younger, I still feel invested in their lives, and was thrilled that Maddy wanted to see me as well. I also got to be nauseated by the dated interior of the place she works in: Miss Maud's in Murray St. I mean really???

After catching up with Maddy I headed down Hay St to the adventure sports stores to purchase a travel bra. I recently read about these: bamboo cloth bras with pockets for storing your valuables, so I thought I'd give one a whirl on my current trip. I also popped upstairs at Mountain Designs to visit the Bibbulman Track Foundation to discuss the progress of the bridge construction that may hamper my route in October. With water in the river (a likely scenario in October) and no bridge to cross it after it burnt down last year, I'm keen to see the reconstruction occur sooner than later, or else it's a big diversion around. But apparently I just have to wait and see, because no-one knows yet when construction will start, as it's entirely dependent on fund raising. No I'm not holding my breath, but I will be making a donation to the cause.

Time for lunch with Catie and Linds, a Perth couple I met on a train in Malaysia many years ago and we became friends. Our friendship continued in the virtual universe, via blogs, emails and Facebook, and we only saw each other again 2 years ago when I also met them for lunch on a visa run day trip to Perth. This was only the third time we had met in person, but we were like old friends, talking about our lives like we'd known each other forever. I never would have met them had I not missed my train the day before!! For lunch we went to The Noodle Forum in Shafto Lane, and fittingly for our history, we enjoyed Malaysian cuisine. I had a spicy Laksa.

After lunch I took a bus to Kensington, to visit my friend Jane, whom I've known since we were medical students (she from Perth, me from Sydney) and met on a medical student conference. A conference where three quarters of the conference budget was spent on beer, and the remaining quarter on education!! Those were the days….

The weather was a very uncomfortable 40 degrees, with a small breeze and not a cloud in the sky. Yep, unbearably hot! I was looking forward to hitting cooler, balmier Bali I can tell you. But that had to wait another day. That evening we enjoyed good food, copious wine and great conversation with Jane and her family, including her husband, sister and two almost grown up sons. I failed to convince them that Geoff should grow a beard though, since he's an original nerdy hipster before hipsters were even invented. Computer geek, vegetarian, coffee freak, electric scooter, Prius, need I go on? His latest passion is an electronic drum kit, the guy is a trend setter!! But sadly, no beard….

The next morning James, Jane's elder son, gave me a lift to the airport nice and early, before my anxiety began to rise. After check in (absolutely no worries with the carry-on baggage) it was the boring old wait again, but the plane was less than half full so lots of room to spread out. Freezing cold aircon though, so glad the Uniqlo puffer jacket (a very recent purchase whilst in Japan) made the cut.

3 hours later and I was disembarking in Bali, through immigration and into the throng of humanity at Bali airport. I was keen to try out the new bus service from the airport, but I discovered once I logged in to the WiFi at the airport, that Juffry was waiting for me outside. So nice to see his friendly face again. Juffry was my couchsurfing host in Surabaya two years ago, and he is currently living in Bali running a restaurant in Kerobokan. Unfortunately he's about to move to Jakarta, so he had no transport himself. We checked out the bus stop, but then decided to walk outside the airport gates and ring a taxi. There's a fixed price taxi service from the airport to locations in Bali, but the prices are at least twice what you pay using a metered taxi coming in the opposite direction. There's also some very dodgy taxi companies, so the safest bet is to ring Bluebird taxis (the most reliable service) and book over the phone. 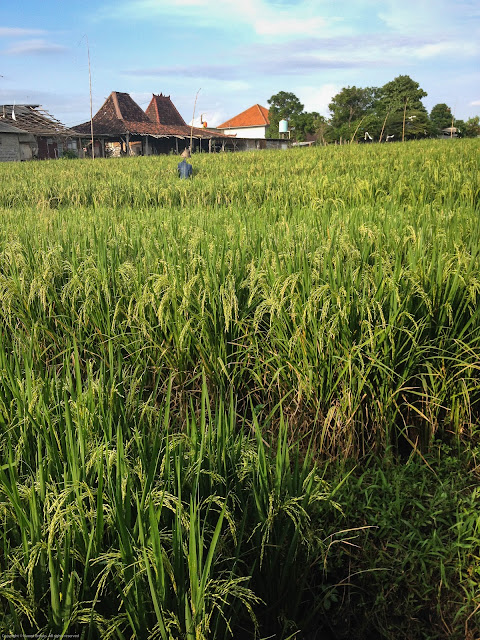 Soon we were at Juffry's warung - Waroeng De Daun - enjoying a cold beer and a bowl of Coto Makassar. This is Juffry's signature dish, which he has shared with the chef. It was nice, but not as good as the one I'd eaten in Surabaya. Never mind, we were off to eat at a fish restaurant that evening, where we gorged on barbequed freshly caught fish with a lovely hot spicy samba. 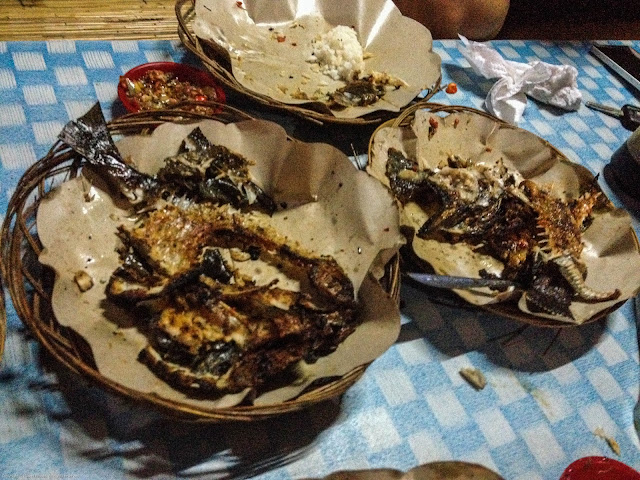 Juffry's current accommodation in Bali is tiny, just a small room with a bed, and adjoining bathroom and kitchen. There was just enough room for me to put my blowup mattress and I slept surprisingly well despite the heat. In fact sleeping so close to the tiled floor was probably cooler than a bed.

The next morning, day 3 on my travel itinerary, I had breakfast at Juffry's warung and then booked a taxi for the airport. My flight was supposed to leave at 12:45 so imagine my surprise when I checked in to discover the plane was boarding, for an 11:25 departure! Lucky I turned up early hey?

The flight was quite scenic, as we flew over Lombok and Sumbawa then Komodo and Flores, landing in Maumere a little before 2pm. I disembarked and headed out of the airport, determined not to deal with the transport mafia yet again. I walked to the main road, turned left, and walked another couple of kilometres in to the town. It was a little warm and sweaty, but when you travel light, walking a few kilometres with luggage isn't too onerous. I find that I never feel orientated in a place until I've walked around it a little, to the obvious bewilderment of all Indonesians, who rarely walk far to anywhere. It wasn't a particularly scenic walk, as the nearby ocean was just out of sight but I passed an interesting statue along the way. 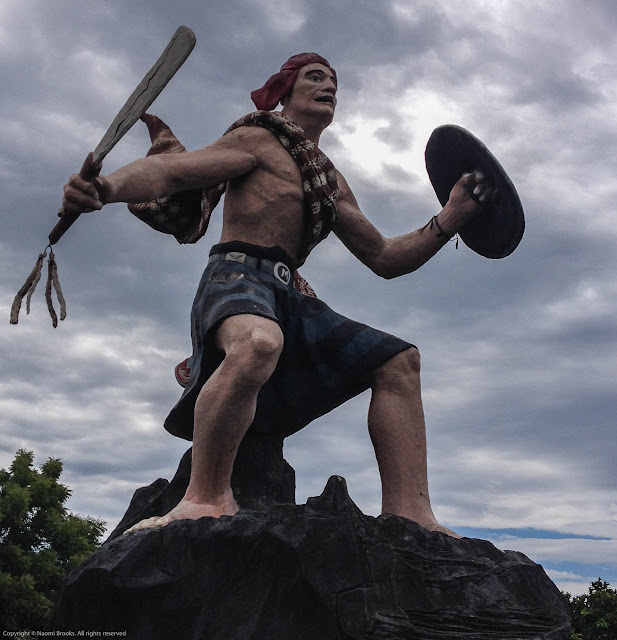 In Maumere I found an hotel, then had a shower and a rest before heading out to explore the town.

Suffice to say, I have arrived at my destination, let the adventure begin.