An encounter on a train

It was a six hour journey on the train from Ayutthaya to Buriram in Thailand's east. The carriage was third class and relatively full, but I'd managed to score a window seat and could enjoy the passing scenery and the natural air-con.

I first noticed them when they sat down opposite me because the young boy was one funny looking kid. A huge broadened nasal bridge and widely set eyes made the paediatrician in me think he must be syndromal. But rule one is check the parents. Sure enough, the older woman holding him had the same facial features. (Thai parents seem to still carry around quite old children, ones who appear to be 3 or 4 years old). 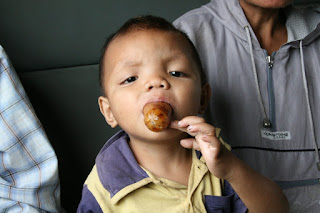 With these two was a younger woman, who looked to be perhaps 17 or 18, who was quite pretty and didn't share the unfortunate features of her companion. As they couldn't speak English, and I couldn't speak Thai, I was unable to determine what the relationship was, and as the journey continued I became more curious to know just what was going on.

A fourth person, a man who was drunk on whiskey, appeared to be part of their party and sat down next to me. He stunk of alcohol and was clearly lecherous towards this young girl, buying her drinks and food and pestering her with questions. It was clear from her body language that she did not welcome the attention, yet she didn't refuse the refreshments being bought for her. The older woman appeared to find the situation amusing, and if anything seemed to encourage the man in his attentions. I continued to wonder what the relationship was, had she been sold off to this older man against her wishes, or was this just a case of Thai politeness where one didn't tell the lecherous bastard to piss off?

The drunk kept getting up to wander off and have another drink and a smoke with his mates at the end of the carriage, so I decided, at the encouragement of the young girl, to spread out my legs over the seat so he'd not be able to sit there. Others in the carriage were similarly spread out so I wouldn't be the only one. When the lech returned he decided to stand near the window, between me and her, which was clearly unsuitable to either of us. I decided to be an obnoxious foreigner and in my most angry voice gave him a shove and told him to go somewhere else as he stunk. He sheepishly left. I exchanged a glance with the young girl and she quite surprisingly didn't seem all that grateful that I had banished him from the scene. There was obviously more to the story than I knew. If only we'd been able to communicate.

The fascination wasn't one sided, I could see that she was as intrigued by me as I by her. What was a single foreign woman doing travelling through the countryside? Was it actually possible to be financially independent and able to do as one pleased without the interference of men? I did wonder what her future held but I guess I'll never know.