It's just impossible to get my head around Thai history, but here's an attempt on my part to give it some clarity: The Thai kingdom was initially under the rule of the Khmer kingdom, who were followers of the Hindu religion and built huge temple complexes along their trading routes. The Khmer had most of the east, the Burmese had the north and the Malay the south. Just when the Thais got in on the act or where they came from, I haven't yet worked out, but I think they came from the north, as Sukotthai was the first Thai capital. Then Ayutthaya became the capital, and the king of this time had considerable diplomatic relationships with his neighbours and the international world. Later, the capital moved to Bangkok, where it is today.


Ayutthaya was sacked and burned by the invading Burmese army of the time (dates are hard to work out as the thai calendar is different from ours), and there continues to be a healthy disdain for the Burmese even to this day. After conquering the city, the Burmese abandoned it, and it remained in disrepair until one of the Bangkok kings decided to restore it. The Fine Arts Department of Thailand has done an amazing job throughout the country in restoring many old buildings and temples and producing a number of excellent pamphlets about them. 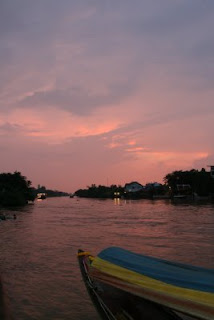 Ayutthaya is less than 100km from downtown Bangkok, it costs 60cents on a commuter train to get there. A hired pushbike ($2) will get you around to all the temples, and an evening cruise on the river aboard a longtail boat ($8) gets you to a few more of the further temples and the chance to enjoy the sunset. The market is lots of fun, with a strong stomach needed whilst walking past the piles of tripe, hearts and livers on sale. The row of pig heads was especially amusing. 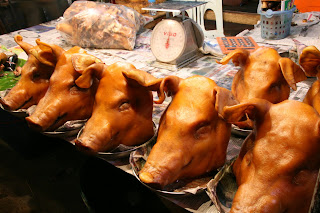 At some point the kings brought buddhism to Thailand, and converted previously Khmer Hindu temples into Buddhist temples (this is the bit that confuses me a little). So some of the temples are a mix of old Khmer influences and newer styles. And don't even get me to name any of the kings, that puts my brain into complete meltdown! 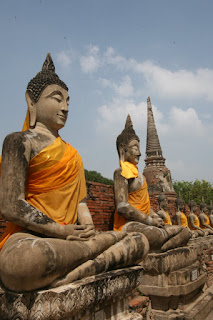 I spent a couple of days touring Ayutthaya with a Dutch girl, Sylvia, who is off to work in an orphanage in Pnom Penh, Cambodia. It was quite an effort finding a restaurant that had vegetarian food, particularly when fish and fish sauce are something you don't eat. I couldn't stand to be that fussy over food, it's so much easier to be able to experiment with the tastes available without worrying just what's in it. I'm sure she'd see it differently, but I actually felt sorry for Sylvia and other vegetarians. 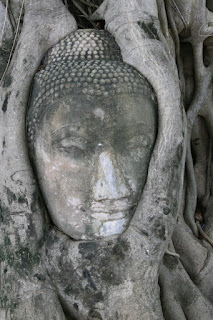 The temples are, of course, mindblowingly beautiful with their towers (called prangs), buddha images and carvings. Observing the local thai's devotion to buddha is an attraction in itself. The amount of money spent on gold leaf, devotional objects and donations puts the measly price of our entrance fee into perspective.