The Aussie digger, who through incredible hardship prevails because of his mates, is a familiar refrain in Australian folklore and history, and the story of the POWs who were forced by the Japanese to build over 400km of railway is one most Australians of my generation would be well aware of. 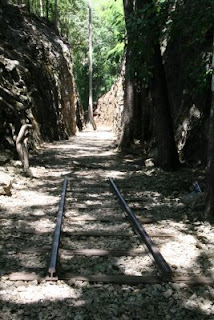 Visiting Hellfire Pass, a massive cutting through sheer rock that was done by hand tools and dynamite, is a humbling experience. It reminds me of how I felt standing at Anzac Cove, Gallipoli. And every year on Anzac Day they hold a dawn service there as well. 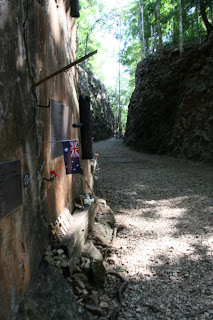 The Thai Burma Railway was built over extremely rough, dense mountainous terrain by Allied POWs captured by the Japanese, and by indentured Asian labourers. There was no heavy machinery available as there was no access, so everything was done by hand: building embankments, erecting railway bridges, and creating cuttings. The conditions were intolerable, with lack of food and serious diseases, not to mention brutal punishments meted out by the japanese and korean guards, causing huge mortality rates. It's actually surprising anyone survived at all! There are war cemeteries to visit, full of the names of young men from all over the world, but no graves for the estimated 90,000 asian labourers who died building the railway. It's sad to think that so many families have loved ones who just vanished without a trace. There were no records kept, unlike those kept by the POWs who were meticulous in ensuring families of dead comrades would know where they were buried, but at least through the memorials here those men haven't been forgotten. 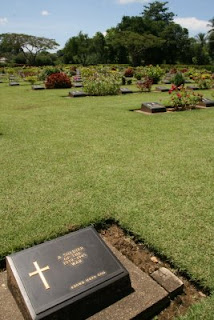 Because I am a complete sucker for punishment, I decided to walk the entire 4km trail and return which has been cleared from the jungle. It's the wet season and it's hot and sweaty walking along the old line. The old trestle bridges are gone but the dry stone walls on each end are still perfectly intact. Huge earth embankments up to 8 metres high were created, all that earth being carried by the sackload, by malnourished, very sick men. It's just gobsmacking to go there, and stand there looking at what they created. 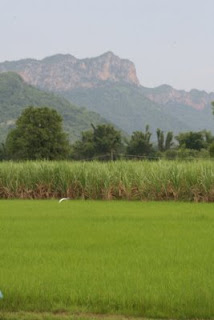 But Kanchanaburi isn't just about odes to the railway and the men who were forced to build it. The bridge over the river (which isn't the Kwai by the way but the Mae Khong) is a great spot for checking out the thai tourist enjoying themselves on karaoke rafts plying up and down the river. Or to take a noisy long tail boat ride from one end of town to the other. 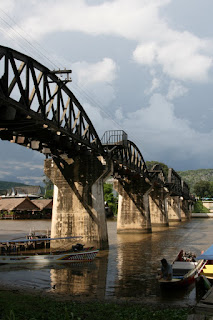 I hired a motorbike - yes i'm getting better at it - and went to visit the westernmost temple of the Khmer kingdom. I thought it only fitting to visit it, given I'll be seeing a few more over the next few months, culminating in the big one at Angkor in Cambodia. Plus I wanted to get out of town and photograph some of the beautiful karst formations that make up the mountains and hills around here. 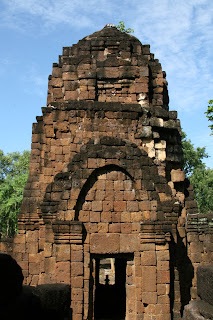 Tomorrow I move on, after I've indulged in yet another thai massage - kind of like a yoga workout with someone else doing all the work for you - with a final train ride along the rest of the railway then a bus trip up into the mountains near Burma. 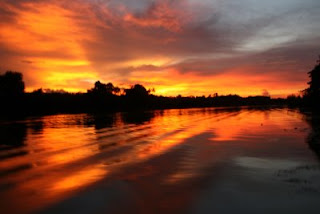