Hiring a motorbike gives you so much freedom to get out and explore the area without the concerns of trying to find appropriate public transport. Once you get out into the countryside, the Thai script predominates, making me basically illiterate. But road signs and tourist signs have roman script as well, making self navigation easier than negotiating which combination of bus or sawngtheuw to take from the bus terminal.

A French couple staying at the same guesthouse in Nang Rong (we were the only guests) and I hired bikes for the day to visit a number of Khmer ruins close to the Cambodian border. I had wanted to go to another ruin further east, but there is ongoing hostilities between Thailand and Cambodia over ownership of the temple since it gained Unesco World Heritage status in July, so I decided not to chance it. So in one day, we tried to visit as many as we could. 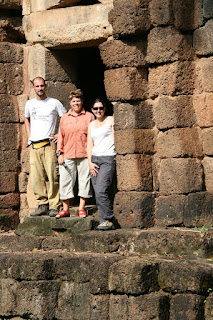 The most famous in the area is Phanom Rung, a temple built on the top of an extinct volcano, looking out over the vast flat plateau surrounding it. The terrace up to the temple must be a kilometre long, it is a very impressive approach, up steep steps to the temple proper on the peak. The temple is oriented east-west such that at certain times of the year the sun lines up and shines through all the numerous doors from one end to the other. 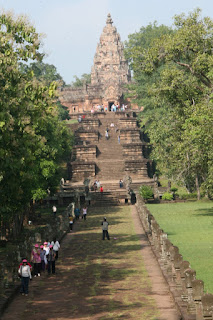 The temple is made from sandstone, and has been beautifully restored by the Fine Arts Department, including recovery of stolen lintels like the reclining Vishnu which was retrieved from a museum in Chicago after considerable adverse media coverage. 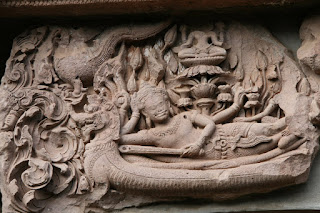 After Phanom Rung, we headed to Meung Tam, another temple complex devoted to Shiva. Again a beautiful restoration, and a wealth of fantastic carvings and lintels. 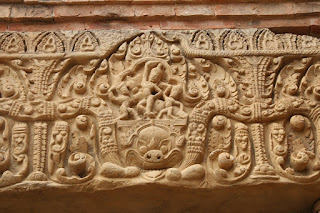 Lunch at a local restaurant then further east we went, to some remote temples right on the Cambodian border. Absolutely no tourists here, not even Thai ones, so we had the places to ourselves. The back of the temple is actually right on the Cambodian border, so we had a chat with the local border boys who guard a wooden fence between the two sides. One side of that fence has land mines, we dutifully stayed on the Thai side! 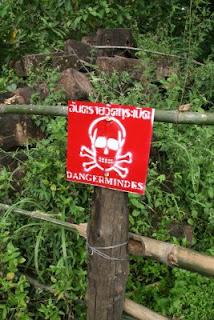 The ride back should have been an easy cruise, through the green as green landscape past fields of rice and little wooden housed villages. But three puntures in the back tyre of Silva and Celine's bike meant considerable delays while helpful locals repaired them. Soon the sun was setting so the final journey was in the dark along the highway with the trucks, buses and cars. Not alot of fun but a wide verge designed for bikes kept us out of the bulk of traffic. A quiet beer and fried rice with chicken was all we could manage before we all retired to bed exhausted. 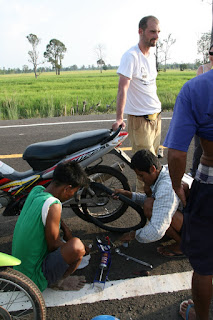