A lake, waterfalls and border villages

Sangkhlaburi is perched on a huge lake formed when the River Kwae Noi was dammed for hydroelectric power generation. It's a tranquil place to spend a few days, but it's also a centre for the large communities of displaced refugees from Burma. 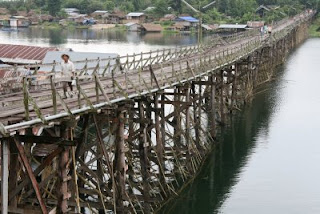 Across the Songhkalia River, via a long wooden bridge, is a Mon village comprising of mainly Burmese refugees. Many live in little bamboo huts on stilts in pretty appalling conditions, made worse by the fact that the Thai government doesn't acknowledge their existence so they have no legal status. This means they can't legally work, or get an education, or access health services. Many abandon their children, who are then brought up in the orphanages run by western expatriates or buddhist nuns. Many westerners support the orphanages through donations, volunteering for 1-6 months, or through buying handicrafts and clothes made by the single mothers who are also looked after. For more information, visit http://www.baanunrak.org/.


Twenty kilometres away, past a police checkpoint to make sure I'm not an illegal Burmese immigrant, is the border town at Three Pagodas Pass. Unfortunately I wasn't able to go over to the Burmese side as the crazy military government of Myanmar have closed the border to foreigners since the cyclone earlier this year. Given that it is impossible to go further into Burma from there, it is the height of paranoia to think western journalists would be amongst the tourists getting a gander of life on the other side of the border (it's a very long way from the area where the flooding was). 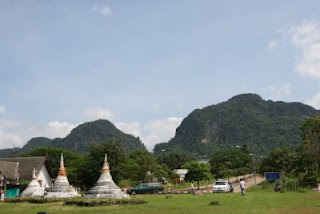 Every day, Burmese people cross the border into Thailand to sell handicrafts at the little stalls set up near the rather unimpressive three pagodas. They drive a hard bargain for their goods - lots of jewellery, teak furniture and knick knacks, and handwoven textiles and sarongs - then cross back over into Burma each evening. I bought a few things, figuring it was a good way to provide some income to ordinary Burmese people not their government. 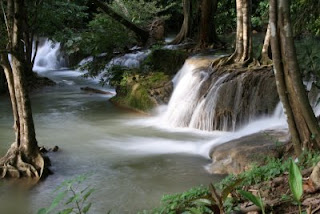 I'm starting to get a hang of the motorbike riding so went for quite a long ride out to some waterfalls for a swim and photography session. Slowly I am learning how to get those silky smooth shots you see on calendars and postcards. The tripod is essential for this, and makes carrying the darned thing worthwhile. 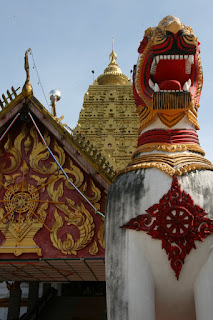 There's also some temples to visit, and a small local produce market. The Burmese ladies with their traditional face powder are quite beautiful, but I've not yet had the chance to do any portraits.


I now have to backtrack to Bangkok before heading off on a cultural feast of ancient temples.