A visit to the northwest of Vietnam isn't complete without a stop in Diem Bien Phu. This town is near the border with Laos and achieved fame as the site where the Viet Nimh defeated the French military in a piece of strategic warfare that should have made the Americans think twice before taking on North Vietnam 10 years later!

Now I'm no war historian but from what I can gather, post WW2, the French tried to continue their political stranglehold on Indochina. The Vietnamese had mounted considerable resistance to the Japanese occupation forces, the French collaborated with them (lousy cowards), and were none too happy with the French taking their country back over. Also, both Laos and Vietnam were being influenced by the communist policies of China (who can blame anyone under a colonial power to not embrace the tenets of socialism) and began to fight the French. The Viet Minh fought street by street in Hanoi, and the French set up a stronghold at Diem Bien Phu to stop the supply of arms and supplies through Laos. The French thought their base was impregnable, as the only way in and out was by airplane. 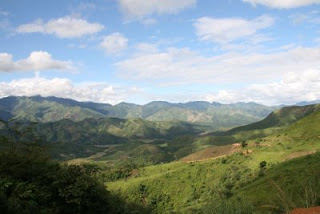 Well the Viet Minh convinced the local minority groups to help them and then they hauled machine guns and artillery over huge mountain passes for 400km, along mountain tracks with bicycles or just on people's backs. Once they were in place, the Viet Minh just attacked each strategic post one at a time, disabled the runway, downed all the planes with anti-aircraft guns and routed the French within 59 days!! Now that's sheer determination!!
We went to the museum which was a bit over the top in patriotic pride (though they well deserve it) and visited the french HQ bunker, but there isn't really much in the town itself besides an enormous bronze victory statue. 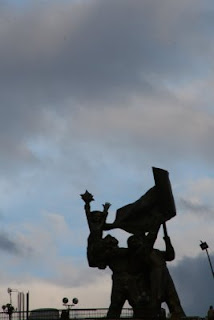 The region is rich with ethnic minority groups who are quite happy to have their photos taken. In one market I was taken firmly by the hand by a tiny lady and dressed up in local attire. Her neighbour in the shop next door went searching for Joe through the market, and brought him back to take photos, then dressed him up as well. Lots of fun, and yes we both bought something from them! 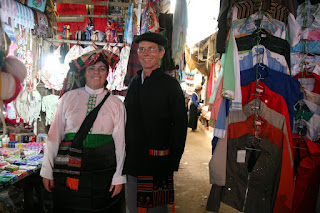 One of the recurring conversations as we travelled along was:
"What group is that?"
"Dao" says our guide.
"Zao?" says I.
"Dao".
"Dao?"
"Yes" 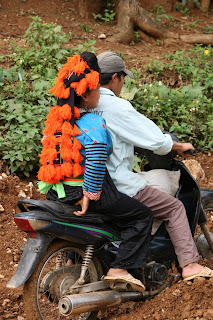 Guess you had to be there!