It's been raining for a week. Hanoi is flooded with the whole city in lockdown and still raining. Up here in the mountains we are about to embark on a three day trek to climb Vietnam's highest peak, to camp out in the cold and wet, and hopefully see something along the way. Are we crazy or what?

We drive up to the top of Tram Ton Pass, where the ranger station is and the start of the walk. The Silver Waterfall is less cloud enshrouded today so that's a good thing isn't it? We each find a strong bamboo cane, don our rain gear and begin the trek.

It's three hours through not such difficult terrain to our lunch stop at 2200m. This turns out to be a shop, yes a shop!, where a hmong lady sells drinks and the porters use her kitchen to cook. We have two porters, one local guide, and our trip guide to support Joe and my trek to the summit. The porters wear plastic sandals and carry the food in baskets on their backs, and they do the climb much faster than us.

After lunch we have a three and a half hour climb to our camp for the night. It's steep, and rocky, but there's a hand rail much of the way and even ladders. It's raining, there's no view as we are completely immersed in cloud, and there are patches of mud to rock hop over. I'm wearing my boots and gaiters, so before long the effort of avoiding the mud becomes too much so it's just squelch on through! 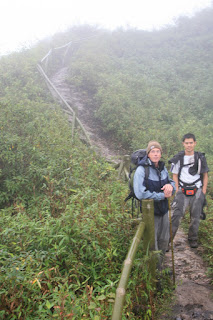 Our night time camp is at 2900m and it's cold and wet. But there is a bamboo mountain hut to sleep, cook and shelter in so it's not so bad, as the wet clothes can be exchanged for dry ones and a cup of tea can be enjoyed before dinner. Joe appears to be suffering from fatigue, which surprised me somewhat, and after a small amount of dinner he goes to bed. I, however, am in good spirits and enjoy a delicious cooked dinner and numerous glasses of rice wine with our guides and porters. It isn't polite not to skull your shot of rice wine, which is 40% proof locally produced hooch, so before long we are all great friends and having a fine time. But tomorrow it's the summit climb so when the liquor runs out it's time for bed. When I have to get up and pee it's icy outside and I almost freeze my butt off! 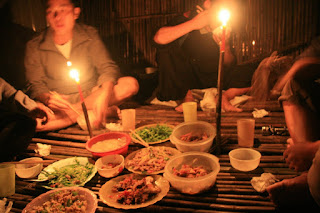 Joe has a dreadful night, with severe headache, fever and aches and pains. He's been in Vietnam for a few weeks working near Hanoi, so the most likely cause is either the flu or Dengue (Malaria not being present in Hanoi). He opts out of the summit climb so it's just me and the two guides.

We set out after breakfast for a steep climb up flowing watercourses and through deep mud. It's not pleasant, and there's no view, as it's raining, foggy and cold. My boots have kept my feet fairly dry so far and continue to perform well in the conditions, even though we are walking through water and mud almost continuously. Then, after a climb of at least 100m, we then descend a good 100m or more!! Like that means I have to climb those 100m again to get to the summit, and again to get back! Now it's that sort of defeatist thinking that wears you down so those thoughts are banished and it's onwards and, hopefully, mostly upwards. 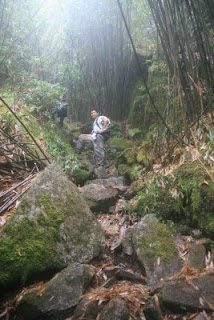 After 2 and a half hours we reach the summit. And what a view!! Complete and utter whiteout. Not a skerrick of nearby landscape to look down on. We could have been anywhere. But we took the obligatory photos, courtesy of the tripod and self timer, shared a snack then began the descent. Which of course included some uphill sections too, grumble grumble. 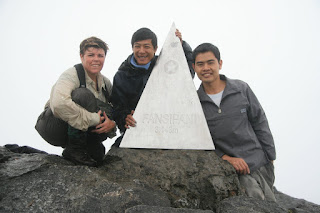 Back at camp, Joe was still in bed, but had a little lunch then began the descent to 2200m where we camped the second night. The porters carried his gear, so he was able to get there before fatigue overwhelmed him and he crashed again. The sleeping arrangements in the huts are far from comfy, with bamboo slats to sleep on. But's it's dry and off the ground, which sure beats a tent! I joined the crew for dinner and yes, more rice wine!

The final day was to be a return to Sapa via a different route. But with Joe being sick, and the weather being so closed in that there really wasn't anything to see, we decided on the shorter route back the way we had come. And the weather did clear a little as we got lower, sometimes we even got to see the hill 50m away! We did however see some pretty cool caterpillars and earthworms including a blue earthworm whose segments went irridescent as it moved. It was awesome, but my camera was all fogged up so you're just going to have to believe me and it wasn't the rice wine playing tricks on my brain!

On the way up, we'd bypassed a stream, but on the return we crossed it. Three times!! Now swollen with many days rain it was up to the knees and not even the gaiters could keep that amount of water out! So we all returned to Sapa completely wet through. Never has a hot shower felt so good! Joe crashed and I went looking for newspaper to stuff our boots with. Now who would have thought that the only place you can buy a newspaper is at the Post Office?? Needless to say it took me some time to find out this vital piece of information.

Along the way we'd picked up a Singapore lass called Adeline who returned to Sapa with us, so I joined her and a Napa Valley winemaker called Steve for dinner and a few beers. Hopefully Joe will soon be back in action and able to continue our travels.