They really wear these clothes to work!!

For the last five days Joe and I have been travelling by 4WD from Hanoi to Sapa in the northwest. Joe is Canadian with an interest in almost anything and also an avid photographer so we are getting on famously. For all those of you tragics who might like to think otherwise, Joe is happily married and anyway far too old for me.

The landscape is spectacular. We've passed through river valleys with wet rice farming, traversed high mountain passes with dry rice terraces and tea plantations, seen raging rapids and spectacular waterfalls, and been amazed by the colourfully dressed people who live in the region. 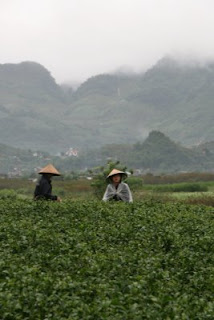 First stop was Mai Chau, home to Thai people, who farm in the river valleys and practice wet rice cultivation. We stayed in a stilt house and were treated to a dance and music display. It was a gentle introduction to the people who live in the region, and the type of tourist oriented display of culture that most westerners experience when travelling abroad. 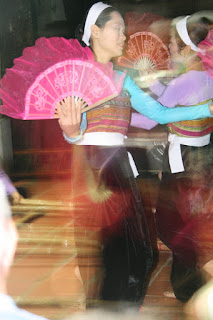 As we headed further north, we passed through many small villages and towns, full of brightly dressed women who do in fact wear their traditional clothes on a daily basis. There they are riding motorbikes, working in the rice fields, buying and selling at the markets, all in colourful headresses and clothing. 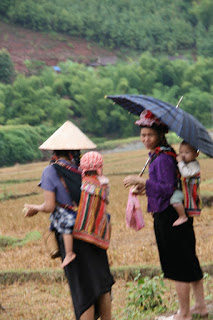 At Son La we visited an old French gaol where many Viet political prisoners were held by the French. It's now being restored and has an a good museum displaying information about the ethnic minority groups in the Province. It was also my first introduction to the overzealous use of ammonia in cleaning products - rooms reek as if someone has pissed in the corner, more than once!! 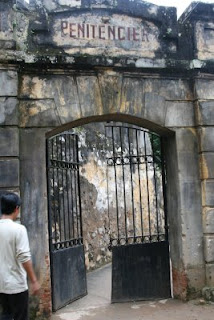 It started raining not long after we left Hanoi, and we soon learned that Hanoi was flooded. Talk about good timing. We too have had alot of rain, which has made for wild rivers and lots of spectacular waterfalls. It's also been nice to be cool for the first time in months. Stay tuned for more.