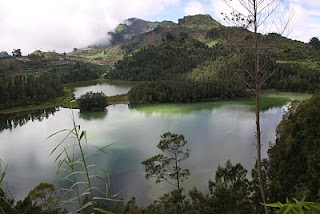 Dieng Plateau is smack in the middle of Java, a boggy volcanic caldera where almost every patch of dirt is cultivated for the growing of vegetables. It's also quite cool and rains alot, so mornings are the best time to appreciate the beautiful scenery before the clouds close in. 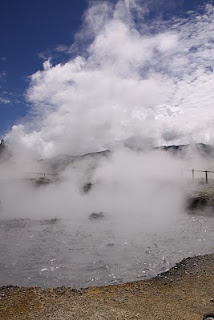 This is volcano territory, with a number of lakes coloured green and blue by sulphuric hot springs, and a few bubbling craters of hot mud. I was particularly taken with Kawah Sikidang, with its waves of boiling mud and sulphurous steam emanating from a hole in the middle of a lunarscape. Nearby is a geothermal power station giving off an even larger amount of steam. But still we have blackouts... 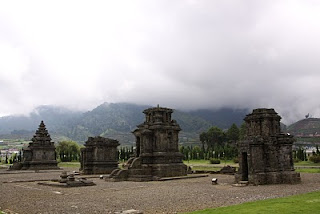 Dieng is also home to the oldest Hindu temples in Java. I have a little go at some long exposure night shots but am interrupted by a loud crowd of local tourists so return to my homestay to slaughter the boys at Scrabble. The boys running the homestay are Scrabble addicts and insist on numerous games so they can learn English. Having become quite addicted to Facebook Scrabble myself, I introduce them to all the two letter words that none of us know what they mean. Later they play with some Dutch tourists, who don't believe the words they come up with. And with neither being native English speakers, it's an impasse!! 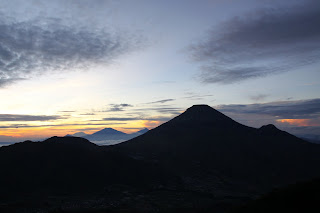 Next morning I am up very early to take a motorbike ride to Sembungan to climb Mount Sikinur to watch the sunrise. My god this place rocks! I take a massive amount of shots that should create a fantastic panorama after some photostitching in photoshop. Later I head up to the summit proper for some more views of nearby volcanoes and the view over the small lake to the village of Sembungan, supposedly the highest altitude village in Java. 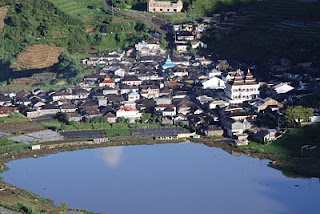 Then I walk all the way back, via one more hill to get some stunning shots of the coloured lakes. There are many more craters and lakes to see in the area but I am on a fairly tight schedule so after a hot shower I am packed and on the first of a series of three buses that will take me to one of the great monuments of the world: Borobodur.
Here's all the rest of the photos of Dieng.