With six days to kill I decided to do a mammoth train trip down the Malay Peninsula to Singapore. But rather than going the traditional west coast route I planned to pass through an area in the middle of a separatist fight with the Thai government, cross a border by foot then catch a train through the jungle just after the end of the monsoons. Yeah I make it sound exciting, and most people won't even venture through Southern Thailand because of the regular bombings, but really, it was a piece of cake.

First step was an overnight train from Bangkok to Hat Yai in Southern Thailand. Here the line splits, with most people taking the western line south to Butterworth in Malaysia. This was the way I'd come from Penang four months previously. The sleepers are great, there's meals and beer to be purchased en route, you just sit there and enjoy the view. As the evening wears on the conductor makes the beds and then it's goodnight till the next morning. 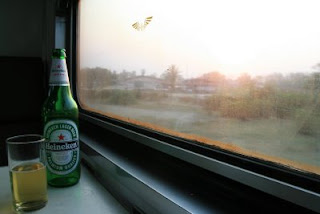 I arrived at Hat Yai at a little after 6:30 am, just in time to jump on a local rattler heading east to the border town of Sungai Kolok. The train is heavily patrolled by cute Thai army boys, carrying big guns, who check all the bags to make sure they have owners. At each stop they monitor the comings and goings, and continue to walk up and down the train keeping an eye on things. The railway stations are surrounded by razor wire, with lots of sandbags as well. The Thai Army were certainly taking the separatist threat seriously, I felt slightly comforted by this show of force but also somewhat disturbed at my foolhardiness. Of course no bombs went off and I arrived perfectly safely at my destination. 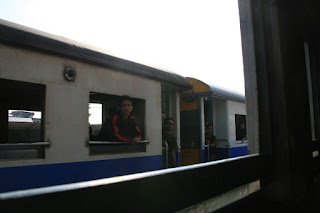 From the train station it's a short ride on the back of a moto to the border where, after the usual formalities, I walk over a bridge to Malaysia. It's then a thirty minute taxi ride to Whakaf Bahru station, for my next train trip. I buy my ticket for the 2pm local, have a plate of Nasi Campur at the restaurant across the road and settle down to wait.
At 1 pm a train arrives and everyone boards except me. The train can't be an hour early surely? Well Shirley was right yet again, and after me waiting another 3 hours I actually went and asked someone. Oh yes, I missed the train all right. There is a one hour time difference between Thailand and Malaysia and I'd forgotten to put my watch forward. Groan, that's what sleep deprivation and coping with armed guards does to you!! I went and booked into a guesthouse for the night.
Although there were more trains that day, the reason for travelling along this line is that it travels through jungle, skirting the large Taman Negara National Park (that always makes me laugh, Taman Negara actually means "national park" in Malay language) before descending the mountains to Gemas. There was no point doing it in the dark, so the 6:30 am train the next day was my best option.
The monsoon has just finished so the land is luscious green. It's a tangle of creepers and ferns, with vast rubber plantations marching over the hills into the distance. That and those ugly palm oil plantations. But there's lots of patches of jungle amongst it too, not to mention my favourite, wooded limestone karst peaks. Enough already!! 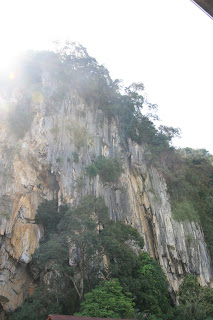 Halfway we stop for two hours in a small town. This gives the northbound train time to pass as it's a single track ahead. It's also lunch time, and I enjoy a delicious nasi campur in a local Indian restaurant. The town is very quaint, a street lined on both sides by Chinese shop houses built in the 1920s, and painted in wonderful colours, with a river passing by. 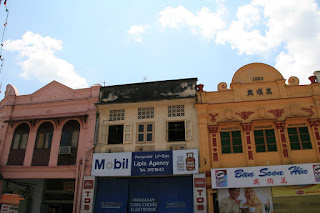 The next bit is a wild rush downhill through more jungle to Jeruntut, where the other westerners leave the train to visit the NP but I continue on to the town of Gemas. It's a 13 hour day for me, and I'm hot and tired, but nothing that a nice shower and change of clothes can't remedy. And a plate of chicken biryani. 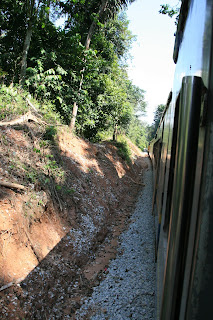 My next train leaves at 5:10 am, not a pleasant time for waking up - am I supposed to be on holiday? This one will take me all the way to Singapore arriving late morning, a very civilised time indeed. So for the third day in a row I watch the sun rise through a train window.
More photos here
I'm now in Singapore, paying 18SGD a night for a dormitory room, and I've just been coerced into buying some new clothes from a local tailor. He didn't have to try too hard, and the concept of having properly tailored trousers after living in trekking pants for six months is very appealing. And it's only money right??