Candi Sukuh and Candi Ceto are two Hindu temples on the slopes of Mt Lawu near Solo. They are the product of the last remaining group of Hindu worshippers who were being driven out of Java by the encroaching Islamic kingdoms. And they are completely different to anything that preceded them. 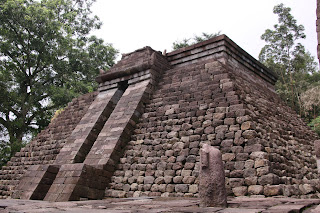 Candi Sukuh in particular is built more in the style of an Egyptian pyramid, with terraced sloping stone walls rather than the usual block stone walls. There also seems to be a return to more animistic motifs, and both temples play considerable homage to fertility rites. The stone lingga at Ceto leaves nothing to the imagination!! 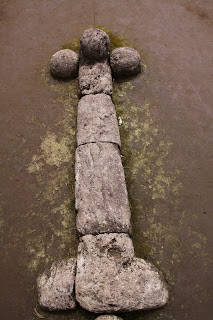 Dicky has taken me to these temples on the motorbike, which stalled a number of times trying to get heavy old me and my backpack up steep inclines, meaning a few small walks. But the downhill run is a breeze, and then it's off to the hill resort town of Tawangmangu where I will stay the night. But first we have Sate Kelinci, a particular specialty in the mountain areas. Yep, Kelinci means Bunny Rabbit, I can hear the gentle refrain of "Bright Eyes" as I tuck into what is quite succulent meat. "Eh, what's up doc?" 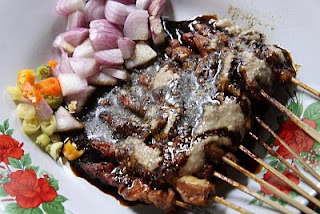 I do hope Dicky got back to Solo before the heavens opened, because that evening it poured. Although the wet season is officially over, there is still alot of rain around, and anyway, I expect a bit up here in the mountains. But the consistent evening rain is making me rethink my plans to climb Gunung Lawu the following day, as I don't have either a sleeping bag or a tent and it doesn't look pretty. My mind is made up next morning when by 8 am the clouds are already gathering: I'll skip the climb and head further afield. I take a Colt up to the start of the mountain climb at Cemoro Sewu, and begin walking down the road to Sarangan, the hill resort for the residents of Madiun. I'm also now in East Java. The walk is lovely, there's very little traffic through this mountain pass, and the surrounding trees are covered in epiphytes and the birds are singing and all is right with the world... 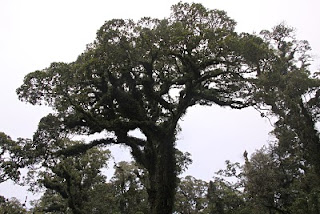 Coming in to Sarangan the forest clears to vegetable plots, and at Sarangan itself there is a tiny lake with more speedboats for hire than looks practical. Who said anyone cares about safety here? 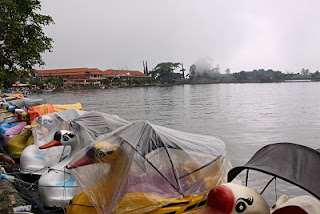 The next part of my trip includes a number of bus trips. First I take a colt to Magetan, then jump on the waiting bus to Madiun, but a conversation with some men at the station (this is where I'm glad of some local language skills) sees me jumping on a Surabaya bound bus instead to Nganjuk, where I hop on a Blitar bound bus. Although I have to jump buses in Kediri, I at last arrive in Blitar at 5pm. I get a room in a hotel and arrange a tour for the morning. That's next.
Here's the rest of the photos.