More temples and how to ruin a pretty piece of scenery 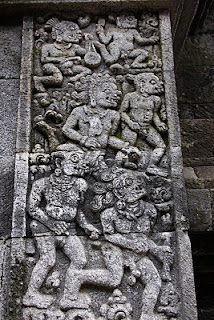 My extensive research had told me about Mt Kelud, a tranquil crater lake easily reached by vehicle, which had erupted in 2007 leaving a steaming lump of ash where the nice pretty lake used to be. Since it was so easy to get to - admittedly on the back of a motorbike meaning one sore bum for me - I included it in my tour of the area around Blitar.

The approach from Blitar is through rice fields, green as green can be, and as we ascend we get sugar plantations interspersed with fields of pineapples. And the occasional bullock dray as well. This is rural Java at it's best, but I'm on a tight schedule to get back to the hotel before 1pm so I don't dally. The climb up to the crater is steep, but my bike today has more grunt than Dicky's scooter, so we make it up without stalling. Then it's an easy walk along a path and through a long unlit tunnel into the crater. And there is this big lump of steaming ash!! Seriously, it looks like someone dumped it there, more like a piece of environmental vandalism than the result of a natural phenomenon. A nearby stall has pictures and even a VCD of the three day eruption, but I've already seen it on the internet, so sorry guys... I have to remind myself that I am currently standing in the crater of an active volcano, and less than 50 metres from me is the evidence. No, they wouldn't let you do this in Australia!! 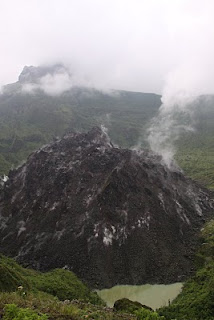 Down the mountain we return the same way and detour to visit Penataran, the largest of the Majahapit kingdom temples, and quite unique as it is East Javan in its architecture and carvings. This place doesn't get the visitors it deserves, as it is no less impressive, although smaller, than Prambanam. Then again, it's not quite as easy to get to as Yogyakarta either. I really like Penataran, something about the place really appeals to me. 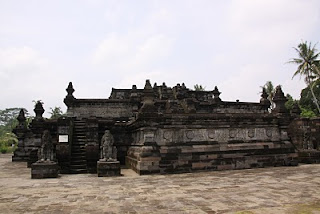 I return back to my hotel in time for a quick shower before heading off by bus to Malang.
For Kelud and Penataran, click here.