How friendly can you handle?

I've just arrived in Surabaya, Java's second largest city, which has a very organised bus station, I'm impressed. After some lunch it's time to take my next bus. I enter the wall of bus touts asking me if I want to go to Probbolingo (I've just come from there), Bali, Jogja, Jakarta, Malang..... they are running out of options and starting to sound confused. I shake my head, smile and say Madura. There is shocked silence then they point me on. I am laughing as I board my bus for Sumenep.

A young man asks if I will sit with him as he wishes to practice his English. This is the first of many encounters with the locals who have got to be the most friendly people I've met anywhere. In fact they can be so in your face it can be overwhelming. Agus chats away, and even invites me to stay with his family. But he doesn't live in Sumenep, and I am keen to base myself in one place for a few days, plus I'm far too tired to be sociable. I continue on to Sumenep, check in to a hotel, and am asleep within minutes. 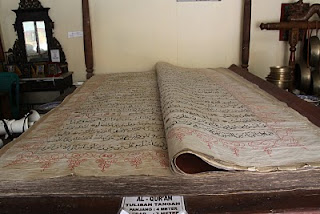 My hotel is cheap, but super clean, and one of few hotels I've stayed in in Java that I can be absolutely sure they change the sheets between guests. Breakfast isn't included, but a cup of coffee awaits me each morning, and the staff are super friendly and helpful regarding usual prices for becak, and what's on around town. I head to the tourist office to visit the kraton, where I am given the full guided tour for the grand price of 15 cents. I also recieve a free brochure and 2 CDs, one with local Madurese music, the other with tourist information. I am also invited to accompany the tourist office boss out to Slopeng Beach to see a boat which is being built. Arrangements are made to meet at 3pm for the trip. 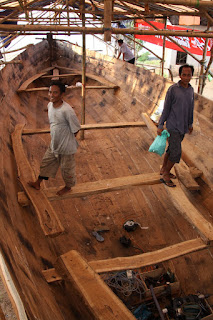 A bunch of school kids have joined our tour, and they accompany me back towards my hotel, peeling off in ones and twos as they themselves go home for lunch. Just as I am almost home I am accosted by another man on a motorbike who wants to practice his English. I say accosted because after I had a very short conversation with him and indicated that I didn't wish to spend longer talking to him, he continued to follow me. In fact later as I headed over to the mosque he continued to stalk me, so I sought refuge in the women's section. Here I met a lovely lass Nur, who I later accompanied back to her family's small shop, still being followed by this incredibly persistent young man. 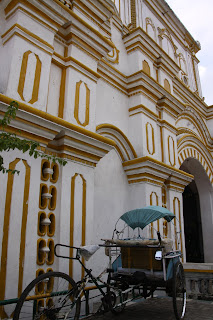 At no time did I feel threatened by this man, it was simply a cultural misunderstanding. He wanted to talk to me and I didn't want to talk to him. He didn't seem to respect my right to say no, ignored my request to stop following me, and appeared bemused by my refusal to talk to his friend on his mobile phone. Even after I'd left Nur's shop he continued to shadow me, but my next destination was the tourist office for my trip to Slopeng, and after that I never saw him again.
Back at the tourist office we take a quick trip to the market to look at Batik, before heading out to Slopeng. Here they are building a traditional Maduran ship, in partnership with a Japanese organisation, which they plan to sail to Shanghai Expo 2010. They'd only been building for 20 days, and the model shows it will be one impressive ship when it's finished in 3 months time. 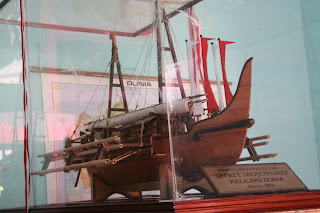 Madura is famous for it's sate, so I find a nearby sidewalk warung to indulge in the local specialty. It is indeed delicious and the stall holder becomes yet another new friend. On my second night there, a fellow diner pays for my meal "because I don't have a husband". Poor chap feels sorry for me!! 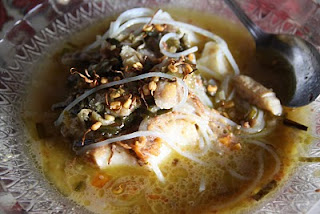 The local market is excellent, and becomes my preferred breakfast location, having found a nice place that serves Soto Madura. The nearby ladies selling roti are pleased as punch to see me returning, and the market people are keen for me to take photos of them. One lady in particular is a natural. 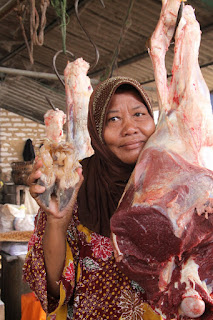 My last morning I am picked up by the tourist office boss and taken to see Kerapan Sapi. This is the bull racing that Madura is famous for. Although the races are held during the dry season, they have practice sessions in Sumenep each Saturday morning at the local stadium. Kerapan Sapi is definitely a bloke's sport. Boys and men flock around the beasts, who are tied two abreast to a wooden "chariot" on which the driver holds on for dear life. Actually he hooks his foot around the chariot and holds onto the bulls' tails, somehow managing to whip them with a barbed stick. To make sure the bulls are even more in the mood for running fast, they tie a piece of leather to their tails that has little barbs on it to irritate the bull's anus. Not really a place for those with concerns about animal welfare... They do run mighty fast and it is quite a spectacle! 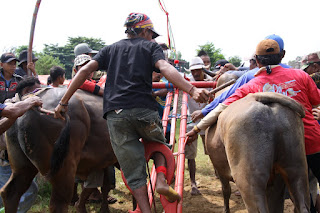 I have been blown away by the friendliness of the Madurese people. Around Sumenep you'll find fine beaches, great food, pretty countryside, a huge vibrant market and the city itself is sleepy and peaceful. The guys at the tourist office seem to bend over backwards to ensure you see everything there is to see, and think nothing of giving you a lift there as well. I'm giving the place a big endorsement because it really does deserve more tourists. But just be aware, these guys are very friendly!!

After taking the bemo down to Kalianget I discover there is no afternoon ferry afterall, so I return back to Java by road. We take the ferry back to Surabaya, just in time for a spectacular sunset. 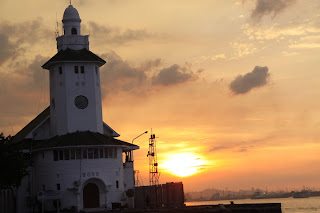 I brave the bus touts a second time and continue on my journey to the eastern tip of Java.
Here's all the pictures.