Funny place Indonesia. Unlike anywhere I've been so far, this country continues to defy my expectations. Yogyakarta is well and truly on the tourist map, so I expected it to be trashy and full of insistent batik salesmen etc and basically a real pain in the arse. Admittedly I'd been advised to stay in the Prawirotawan area rather than in the main backpacker area near the train station, and I didn't venture north of the Kraton to where the bulk of the hard sell occurs, but aside from the usual becak drivers wanting fares I found Yogya hassle free.

Prawirotawan is quiet, and has a great local market at the corner of Jl Parangritis. There's a high speed internet cafe nearby, and a surplus of good local food outlets, as well as some higher class western restaurants for those so inclined. It's within walking distance of the Kraton, and best of all my homestay has a pool! I'm in heaven!! 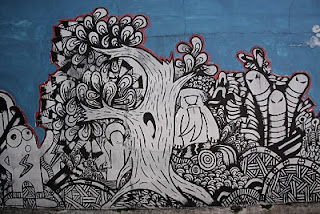 There's some quite interesting street art/ graffiti in Yogya, which I can enjoy whilst walking the streets. As usual I am looked at with incredulity for not only walking everywhere, but also for being female and alone. Somewhere along the way I am picked up by a guide, who explains things in a mix of mostly Indonesian with a smattering of English. To my great surprise I am understanding him quite well and he is a pleasant enough chap so I decide to let him show me around for the day as it certainly makes negotiating the labyrinth of the Kraton area a lot easier. 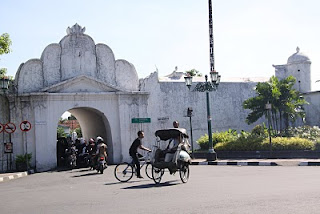 We go to visit a puppet maker, where the young man making the puppet explains in incredible detail about the meanings behind the shapes and designs incorporated into the carvings. As if that isn't enough, there is further meaning attached to the colours it is painted, with different colours indicating different emotions. There are over 350 different puppets within a wayang kulit collection, which means lots to choose from if buying one. I buy two and am given a very flattering commentary on the good quality of my character for choosing those particular puppets. I struggle not to be cynical as to whether this is just sales pitch hyperbole, as the young man really is quite earnest! An explanation of the meanings of the puppets I have purchased will be sent to me by email. 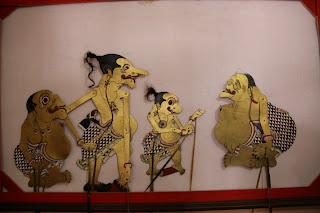 Next it's off to the Sultan's palace, where there is a display of dancing and gamelan to watch, before touring the museum full of artifacts and photos of the beloved 9th sultan, the current sultan's dad. The current sultan only has daughters, so I'm unsure who takes over next. There are some lovely large ceramic platters from China that I wouldn't mind absconding with, and the batik collection opens my eyes to the fact that some Batik is actually quite nice. I've unfortunately seen only crap stuff before, typical me, I only like the good (read expensive!!) stuff.... 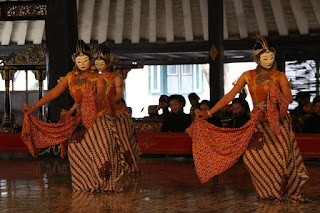 It's now noon, and rather than have something to eat I am taken to the bird market where there are not only birds for sale - I even saw an eagle - but lizards, snakes, dogs, cats, bats, mice, fruit bats, rabbits, guinea pigs and monkeys. Then there's ant eggs, crickets, caterpillars and worms to feed your new pet, though the mammals and reptiles are usually eaten for medicinal purposes. I am no longer hungry... 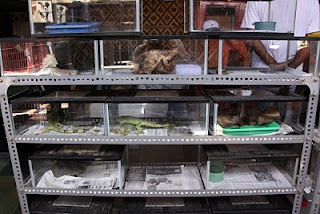 After the bird market we visit Taman Sari, which is a vast water park designed by a Portugese architect for the Sultan's folly. It includes an airy spot on top of a hill, an ingeniously designed underground mosque, secret tunnels and underground canals that allow the sultan and family to travel in and out of the city by boat or foot undetected, and a very flash set of bathing pools. One of the pools is for the use of the Sultan's wives (the current one only has one) and the Sultan has a tower that he can sit in and look down on his ladies cavorting. Strange weird fact: in the corners of this pool enclosure there are two graves for the Sultan's horses!! Hmmm... 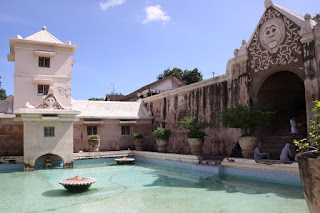 It is now time to bid my guide fare thee well, and although he has offered to take me to see a wayang kulit show tonight I decline as I am planning to see the Ramayana Ballet instead. He decides to accompany me a little way in order to steer me into a picture gallery, where I am given a cup of tea and regaled with the story that this is a school of art etc etc. I have a look but am not interested so we leave and soon my guide is also finished with me. I give him a generous tip - I have afterall enjoyed his company - and bid him adieu and return to my homestay to enjoy a welcome dip in that lovely pool. But first I have the best Bakso evah from a little "kaki lima" - the name given to the portable street food sellers, meaning five legs - just next to the market. Yep, I'm enjoying Yogya. Here's more pics.

The Ramayana Ballet is alot of fun. I opt for seeing it at the local theatre rather that going out to Prambanam. I have seen the story performed in Bali, but this one is of course done differently and is quite funny at times. In particular, the band of monkeys are played mostly by kids of all different ages, including one who couldn't be more than 3 or 4 who completely steals the show. A great night out I can highly recommend. The pictures are here. 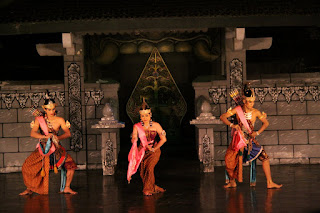 The following day I hire a bicycle and take to the crowded streets of Yogya before finding the quiet canal path that takes me almost the whole way to Prambanam. The main temple complex of Pawon is Hindu, with individual temples devoted to various deities, but there is also a Buddhist temple, Candi Sewu, which is currently undergoing major structural repairs, complete with workers in no safety gear climbing the temples without ropes or harnesses and smiling happily for my camera. 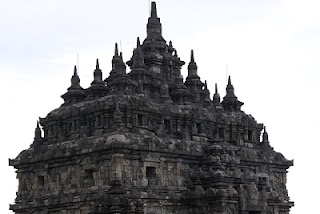 The Prambanam plain has scores of temples, both Buddhist and Hindu, with some only recently discovered. Candi Sambosari is one such temple only discovered in the 1980s when a farmer uncovered a carved stone and subsequent excavations revealed a temple which had been covered in a huge layer of ash from one of the many eruptions of the nearby volcano Merapi. I cycle back to Yogya, arriving just on dusk and enjoy a lovely cooling dip in the pool before joining a Dutch lass for dinner.
The Prambanam pictures are here.

Tomorrow I head to Solo.