The waterfall trip with the Dutchies

I love Dutch people. They are great adventurers, but they're also practical people, and most of them speak great English. A young couple, Emma and Jorn, were staying at the same accommodation as me, so we decided to go together to visit Cunca Wulang, which is a river canyon with a waterfall, about 30km from Labuan Bajo. Recently, a Malaysian national had died jumping off rocks into the canyon, and we heard conflicting reports from various people as to whether the canyon was open or not. Others had visited only a couple of days previously, so despite the warnings from some tour operators, we stocked up with water and snacks, and headed our motorbikes out of town.

Initially, we took the main Transflores Highway towards Ruteng, which soon begins to climb up into the mountains, around countless blind hairpin bends with stunning views back down to the coast. There's little traffic, and we take our time. We both top up our fuel tanks before leaving the highway at a well signposted turn off.

Then the road descends, along an asphalt road in good condition, all the way to the tiny village of Wersawe, where the office for tickets to the waterfall is closed, perhaps confirming that, at least officially, the canyon is closed. That never stopped anyone here in Indonesia, so we continue on. One local offers to guide us, but we don't feel that is necessary, so the chap informs us to head up the hill. This turns out to be a misdirection, but results in a new discovery: another waterfall.

We head up the hill to where the road forks. We ask a couple of locals which way to go but they are unhelpful. We take the left turn into another small village, where we meet a young man who speaks good English, who says the canyon is indeed still closed, but that we should visit a smaller, nearby waterfall called Cunca Lawar instead. We backtrack and take the right hand turn uphill and along the road for less than a kilometre, to a small river crossing. There we meet some young schoolkids on their way home for lunch who show us where the waterfall is. 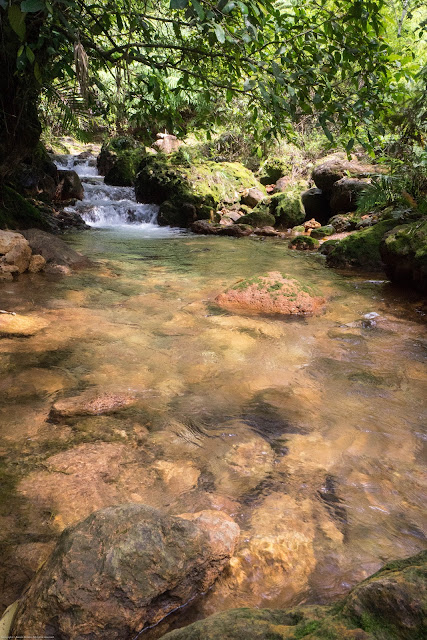 It's just off the road and has only a small drop of a couple of metres, but there is a cave with bats and it's possible to stand right behind the waterfall. We have the place to ourselves so we splash around in it for a while. 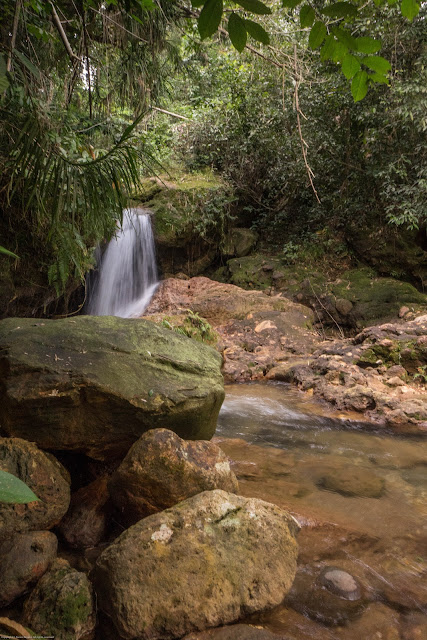 After our first waterfall, we are hungry for more, and knowing that friends had visited the canyon only a couple of days ago, we determined to go anyway. We drove back to the intersection, turned right through the village, and at the last house we parked the bikes and prepared to walk along the stone track. It was then that the house owner came out and told us we were on completely the wrong road, that we needed to go back to just before the ticket office at the other village and take the road downhill. That's when we realised we'd been misdirected in the first place.

Back we went, found the correct road, and then parked up the bikes rather than drive along a road made of stones. These stone roads are common in Flores, because they resist being washed away during the wet season, but are very painful to ride on. They aren't much fun to walk on either!!

At last the stone road finishes, and a walking track continues, which descends quickly through rainforest, to the river. There we make our way upstream, to another waterfall coming from a stream entering the main river. 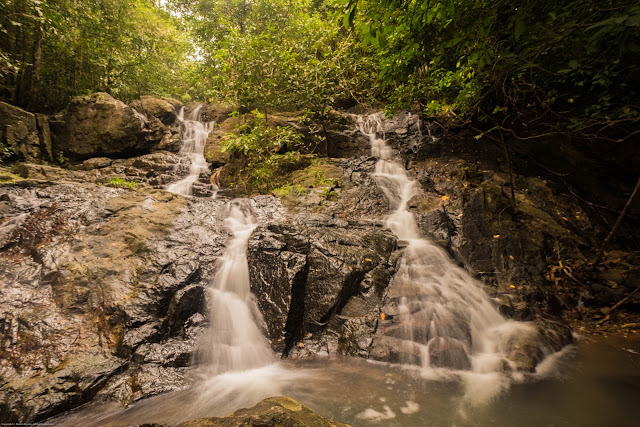 After crossing the incoming stream we see the canyon up ahead, with a large and powerfall waterfall at the other end of it. But to get closer we must cross the river. And there's the rub. 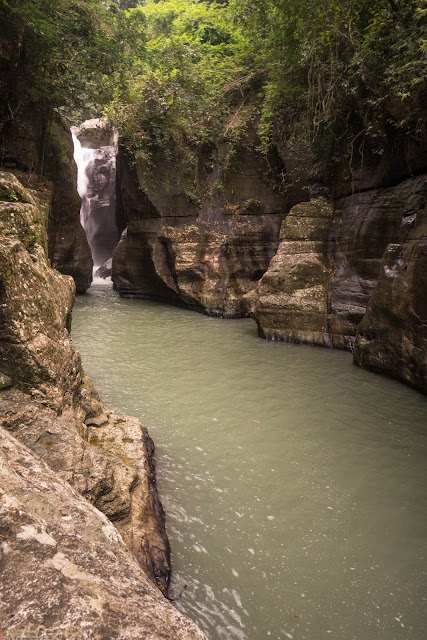 It's no freaking wonder people die by slipping on rocks and hitting their heads, because there's no safety infrastructure, despite it being a recognised tourist spot. There's a filthy disused toilet block, and a pavilion next to the river, but no bridge or safety rails for crossing the river. Instead, there are two large branches roped together over one rushing chasm, whilst the others require very careful leaps. Crossing that river was so much more scary and hazardous than riding a motorbike there…. 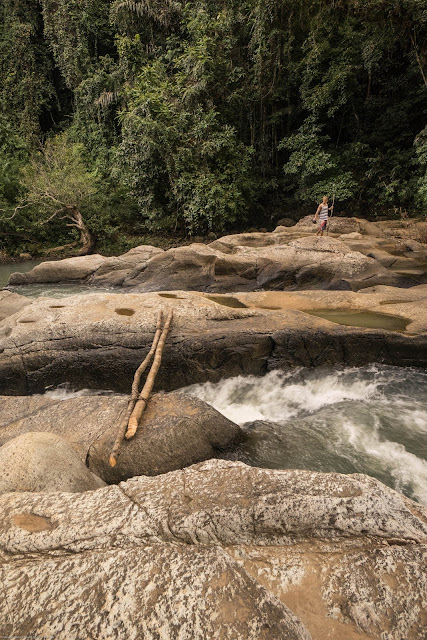 On the other side we carefully make our way up to the canyon over slippery moss covered rocks. It's not possible to get close to the waterfall, unless you jump into the river, something many people do, despite being ignorant of submerged hazards. We carefully slide into the water where it's safe, and swim against the current as close as we dare. It's too big a drop, and too much water, to get too close, but we enjoy the float back down the canyon instead. 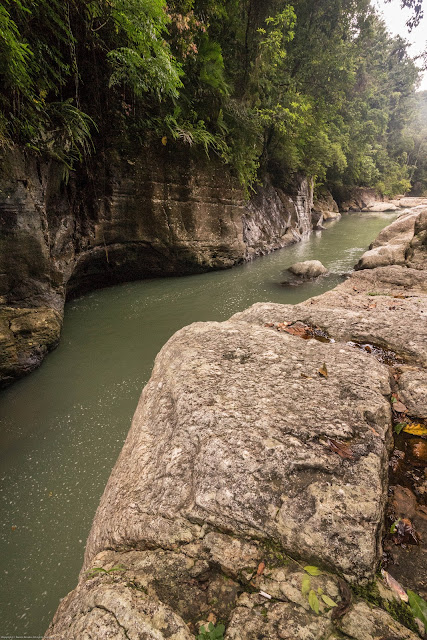 I opt to swim across the river rather than attempt to return the way we came. I'm wet anyway, and it's an easy swim. Jorn helpfully takes my backpack across for me and Emma bravely also returns via the terrifying leaps over rushing water. We then head back uphill to the bikes. 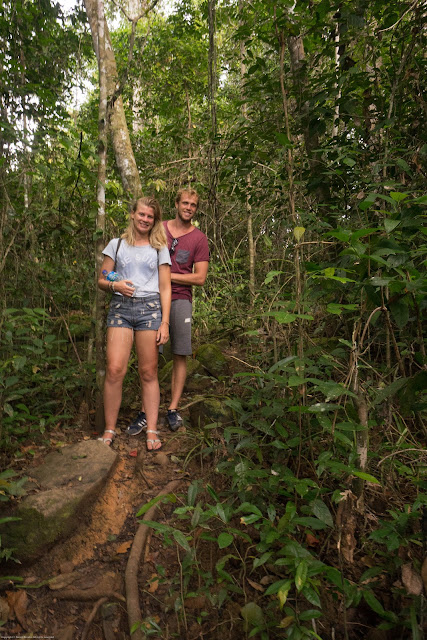 On our way back to the highway, I realise my bike has a flat tyre. There's nothing I can do but keep going, and once back on the highway we quickly find a place where the tyre can be repaired.

Then we descend down the hairpin bends, with glorious views of the sun setting on the islands around Labuan Bajo, and return to our homestay.