Ecotourism from a village in the clouds

This is the story of Wae Rebo, a small village of traditional beehive huts perched on a ridge in the middle of a forest, surrounded on all sides by steep mountains, with the only access in via a narrow path from the south. It looks like a film set, but it's a real living village, maintaining its traditional culture, and obtaining a very healthy income by welcoming tourists amongst them. 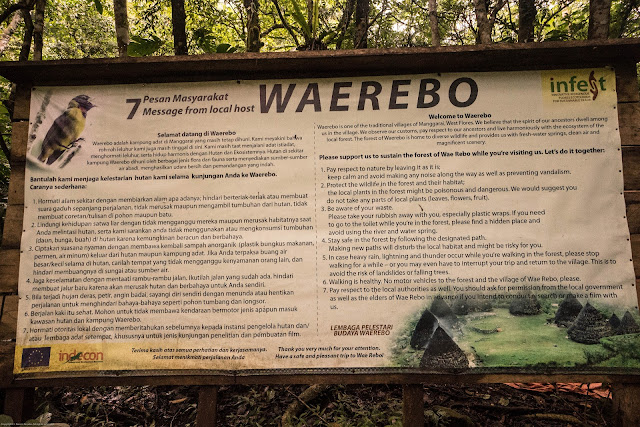 Ecotourism tends to make me very suspicious, because it usually denotes a tourism experience considerably overpriced and a bit manufactured, where the visitors are welcomed warmly, but the people maintain a distinct distance from the gawkers with their cameras and curious intrusions. The concept is to share the spoils of tourism amongst the entire community, giving everyone an income, and encouraging the villagers to therefore maintain what it is the tourists come to see in the first place.

Thankfully, at Wae Rebo, once you get over the shock of the inflated prices for visiting or staying in the village, plus a religious tariff payable on arrival before photographs can be taken, and finally another fee for a song and dance exhibition complete with a question and answer session, it's really quite a wonderful experience. But anyone on a tight budget, don't bother.

The story of the founding of Wae Rebo is quite interesting. The original ancestor, a man, came from the Minangkabau region of Sumatra. He arrived in Flores, and after trying to set up villages in various locations in the region and being forced to flee, he at last arrived at the current location. I make a note that he was a man because in the Wae Rebo culture, men are everything, and women are very much secondary citizens. In fact men are encouraged to marry outside the village, so the women born there leave, whilst new wives arrive. This contrasts markedly with the matriarchal society of the Minang, where women own the property and the men move in with their wife's family. I suspect the original Wae Rebo ancestor of being one very disgruntled misogynistic chap!! 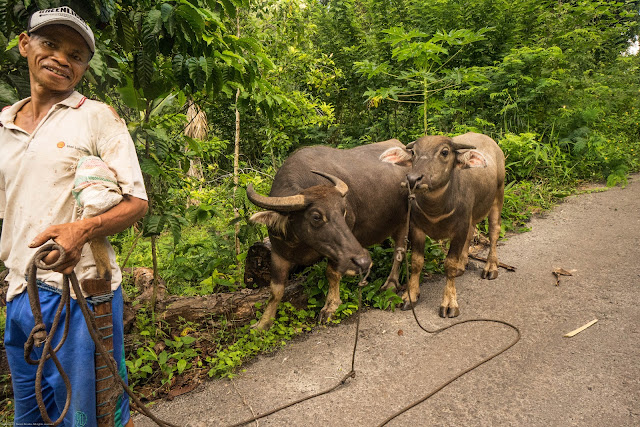 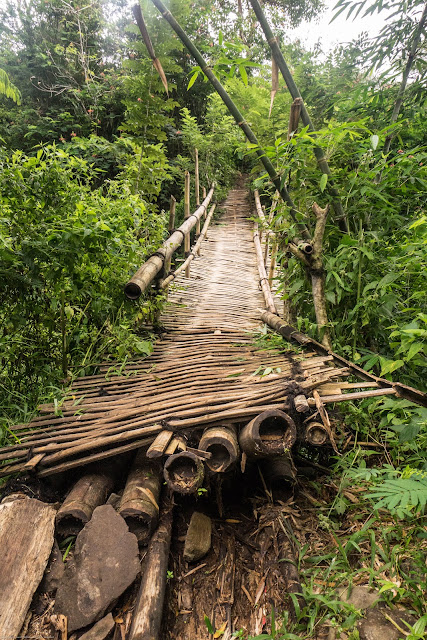 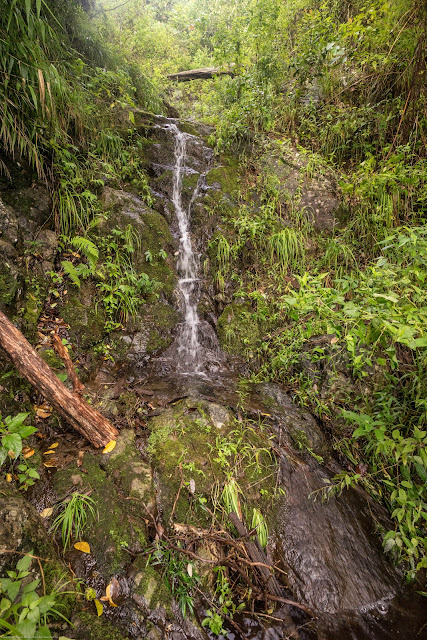 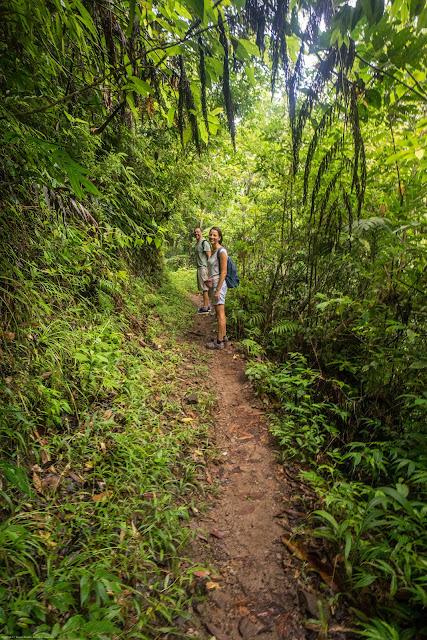 Getting to the village requires a walk of about 6km through the forest, on narrow tracks along the side of steep mountains, and in through a gap to descend to the village. Before arrival we must ring a bell to let the villagers know we are visiting, and first stop is the main house, where we meet one of the village leaders and are formally welcomed. This formal welcome is part of the villagers' adat, or local animistic culture, which in days past would have involved offering a chicken or some other animal for sacrifice. Now you just need to offer money, the fixed price depending on the size of the group. For one or two people, it's 20,000Rp, for 3-6 it's 50,000Rp. As Bruno, Mariana and I had teamed up to hire one guide between us, we now had to pay the 50,000Rp adat fee. It would have been fun to arrive with a chicken or two instead, just to see their faces. Mind you, chickens are expensive to buy in Indonesia, that adat price is a good deal! 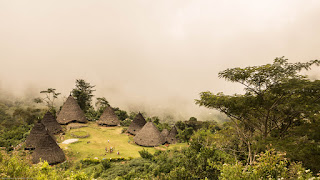 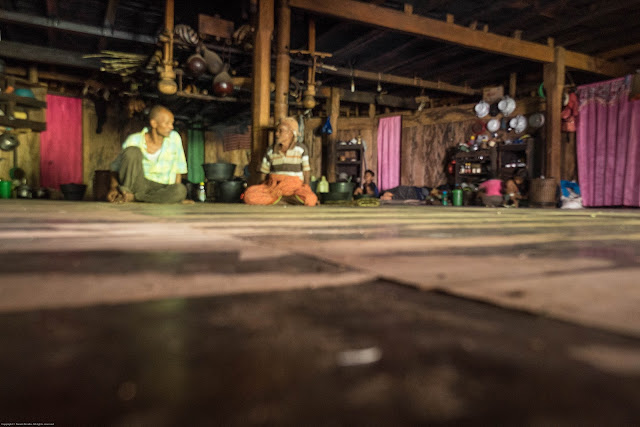 Once we were welcomed as family to the village we were escorted to the visitors' hut, where we deposited our bags and were given a cup of coffee to drink. The villagers used to grow a variety of crops, but now mostly concentrate on growing coffee, as it commands good prices. There are wild civets in the forest, protected from being hunted within their culture, so they collect their faeces for the kopi luwak. But just the normal coffee is excellent, in fact the best coffee I've tasted in all of Flores. Unfortunately they only sell it in powdered form. 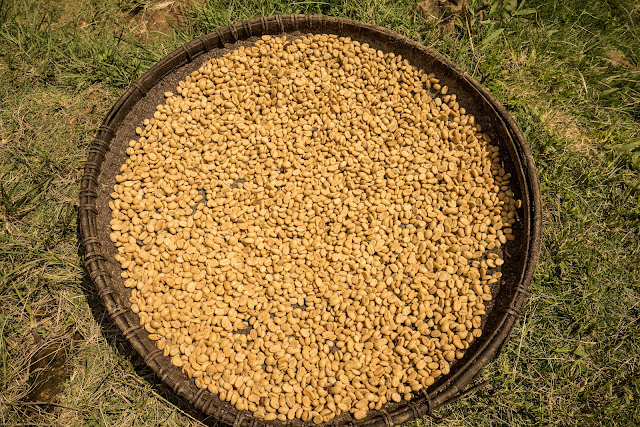 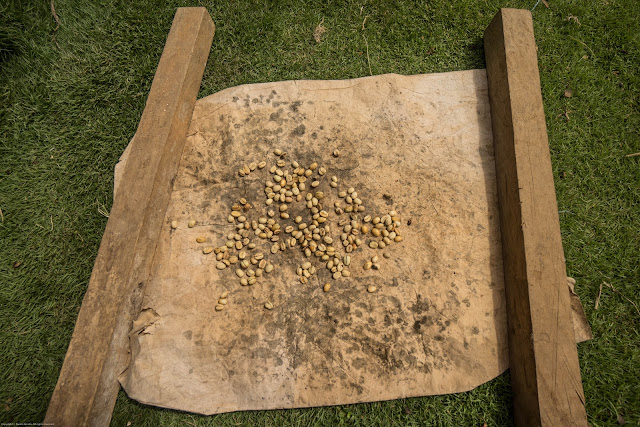 After coffee we were free to roam around the village, talk to anyone, and take photos as we pleased. I still ask before I take portraits of people, it's only common courtesy, but everyone was genuinely happy to interact, to chat, and to welcome us warmly. We weren't the only guests, by the end of the day there were about 15 people staying the night. Last week, during the Indonesian holiday weekend, the village hosted 200 in one night!! 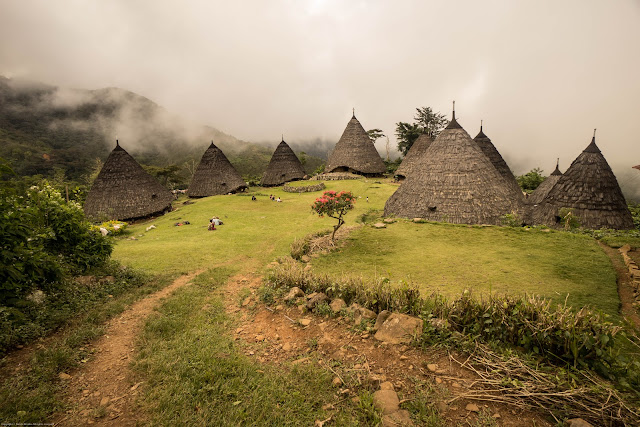 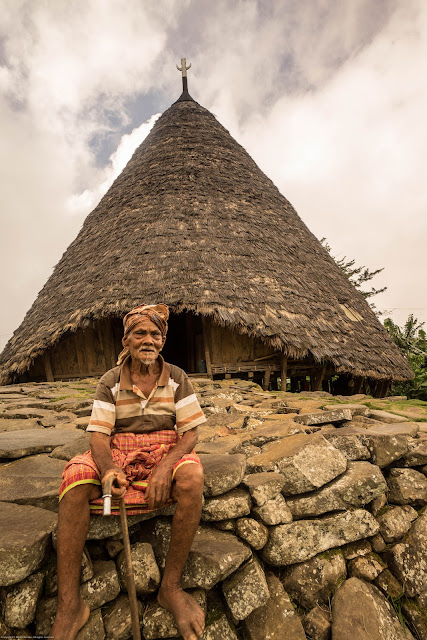 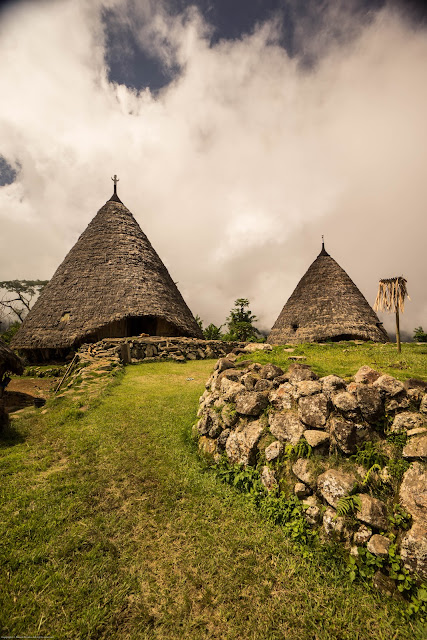 There were a lot of kids in the village, all keen to play football, so a number of the westerners joined in. We were lucky, because most of the kids live down in the village at Denge during the school week, returning on Saturday for the weekend. But this week there are examinations for the higher school grades, so the younger students are exempt from attending. In fact most families have a second house in the village, and commute up and down on a regular basis. 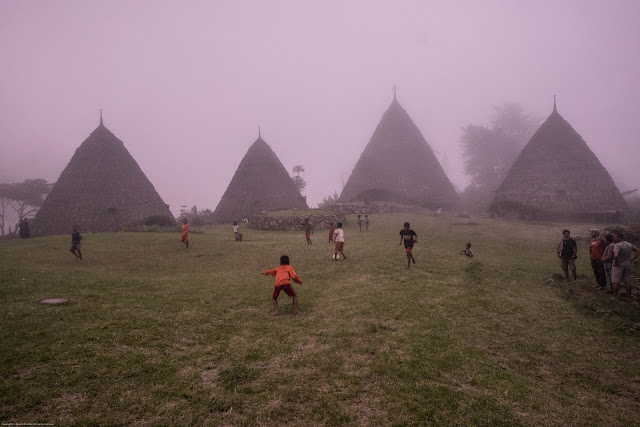 Each house is a communal house, and may house up to six or eight families. There is a central hearth where cooking is done, and then there are 4 more levels above the main living area, where food and supplies are stored. The uppermost level is reserved for adat, for storing sacred objects and sacrifices to the ancestors. There are six houses plus the visitors' house, plus a number of non traditional houses built to one side, therefore not spoiling the surreal vision of the seven huts perched in the clouds. According to the official history book, the houses were all renovated in 2006 with money donated by the lady who owns the bottled water company Aqua. And the villagers were educated about ecotourism, and the rest is history.

At 325,000Rp per night, including meals, the village is earning a tidy income. Despite being quite an effort to get there, the place gets well over 5000 visitors a year, and apparently the money is distributed equitably throughout the entire community. There are also handicrafts, coffee, spices and sarongs for sale, displayed tastefully in one area of the visitors' hut with no effort at hard sell. Everyone treats you as family, even inviting us back to their place for another coffee. The women, meanwhile, take turns cooking in the attached kitchen for the guests, the visitors' house not having an internal hearth like the others. Us westerners wouldn't tolerate sleeping in a smoky environment, though these huts are considerably better ventilated (they have cute little hobbit windows) than the huts in Timor. 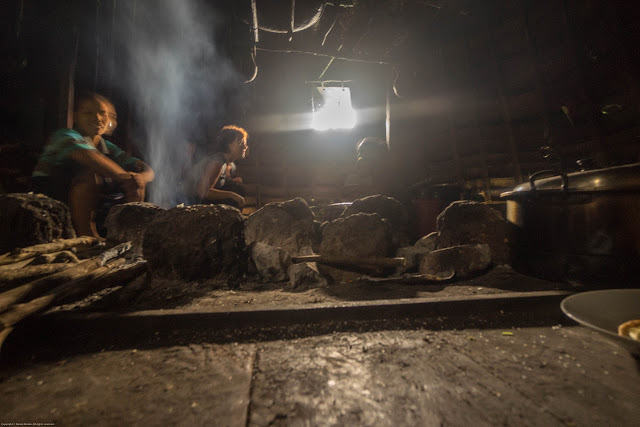 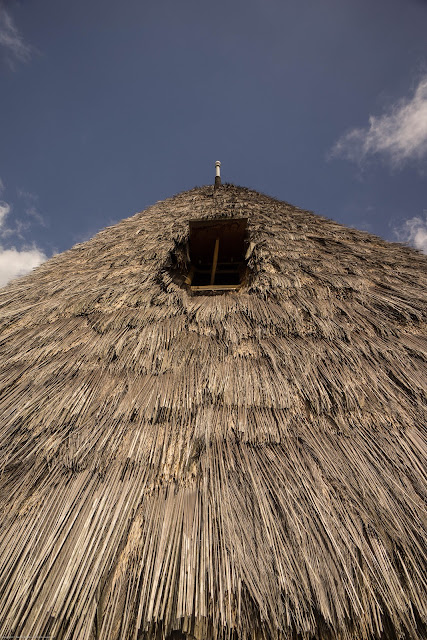 The sleeping arrangements are simple bamboo mattresses on the floor of the hut. It's quite comfortable, once I snaffle a warmer blanket, but I sleep fitfully, as my knee is giving me a bit of bother for the first time in a while. The cocks crowing at 5am in competition with each other puts paid to a sleep in, so I get up and wait for some colour to fill the sky. I am not disappointed. 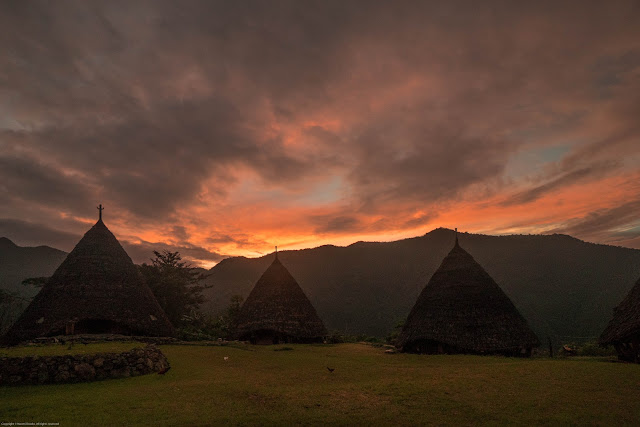 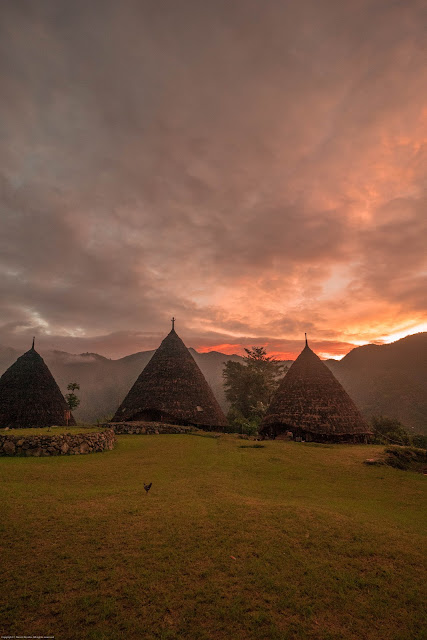 After breakfast and fond goodbyes, we leave the village and make our way back down the path. We pass a large number of villagers' on their way up, bringing supplies bought at the Monday market. Huge bags of rice, chickens trussed on poles, a very reluctant goat, and a slightly cantankerous pig. Apparently there is a ceremony planned in a few days' time and the goat and pig will be sacrificed. The chickens are to feed the tourists. Each villager, despite the heaviness of his load, stops, shakes our hand, and introduces himself. We do the same, overwhelmed by the generosity and completely real warmth of these people. 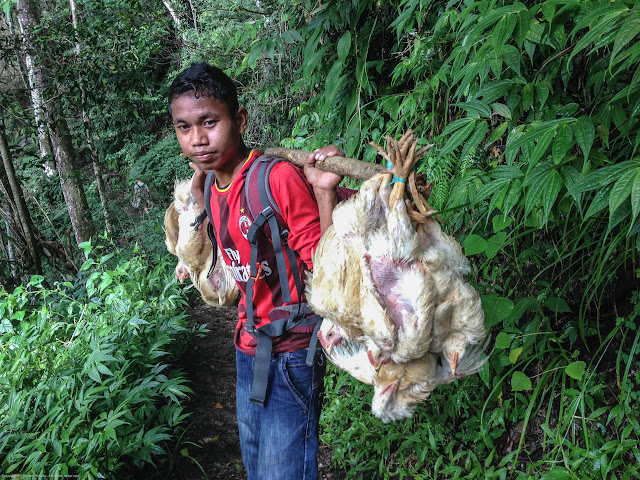 Mariana develops a blister, so we are all grateful for the lift down the last bit of asphalt to our homestay offered us by a german couple equipped with a car! And then we jump on our bikes and drive back to Ruteng.

Back at the Rima, I plan my next adventure: a crater lake and a waterfall. That's next.