The Yangtze River begins on the Tibetan Plateau and flows south, parallel with another great river, the Mekong. But just north of Lijiang it takes a mighty U-turn and heads north, therefore becoming China's famous river and irrigating its plains. On its northward travel it passes between two mountain ranges, Habashan and Yulong Xueshan, creating Tiger Leaping Gorge. 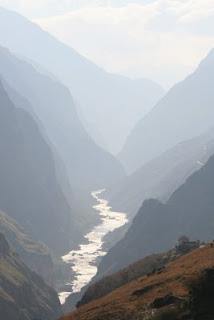 This was the reason I decided to loop out of SE Asia into China, having found a reference to it in a magazine in North Sumatra, and it had been beckoning me ever since. So now here I was at last, off the bus from Shangri-La at 6pm, therefore avoiding paying the 50 Yuan entrance fee as the ticket office had closed. Good start.

I'd bought a bottle of Shangri-La wine, so over dinner at Jane's Guesthouse I shared it with an English couple on their honeymoon, and discussed our trek up the gorge. 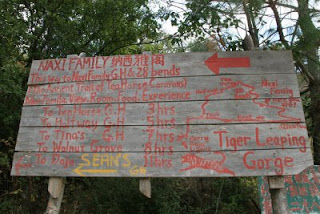 We left at 10:30 after a massive breakfast, and began the steady climb to Naxi Guesthouse. From here it's a steep climb up the 28 bends to a superb lookout over the rapids in the upper gorge. If walking uphill isn't your thing, there are men with horses only too happy to transport you for a fee, or you can purchase some happy weed for helping you up those inclines! 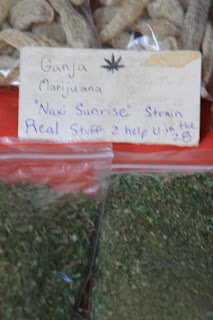 Once over the bends the path descends some way and then becomes a traverse along the high path, with glorious views down to the river and the changing colours of the autumn vegetation. We stumbled into Halfway Guesthouse around 6pm, to stay in dormitories looking out on the most spectacular views of the mountains opposite. Even the toilets have views! 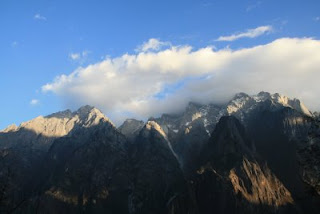 An early morning start got us down to the road, and Tina's Guesthouse, by 11am, where we breakfasted while watching the sun rise over the peaks opposite. I can highly recommend their hot chocolate! 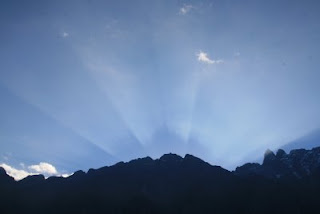 Next was the descent to Tiger Leaping Stone, where a tiger is said to have leapt across the river. There's a number of paths, but we just took the one from Zhang's Guesthouse which was fairly painless, though steep in sections. Getting down to the river itself, and watching the power of the water through the rapids, was fantastic. 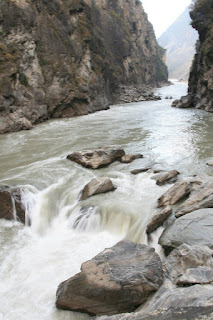 At the top, I parted ways with Jason and Ellie, who were heading back to Lijiang, while I was walking further down the gorge. I continued on to Sean's Guesthouse in Walnut Grove, where I shared the evening with a cycling tour group on an Oxfam fundraiser. It's strange to be amongst a group of people on a short holiday, whose minds are still irrevocably tied to their home lives and loved ones. It almost feels like being in a parallel universe. 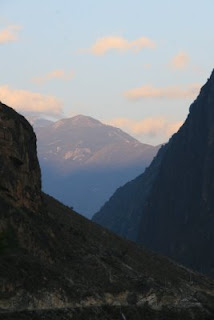 The next morning I was actively discouraged from continuing further up the gorge, mainly because it would cost me lots of money to get back the other way (more on that later), and it wasn't very interesting. Well for a girl without a budget and with a stubborn wish to find out for myself, I headed off regardless. The walk is along a paved road, but this end gets little traffic as most tourists don't stray past the paths down from Tina's. I shared the road with a few trucks and minibuses and the occasional flock of goats. I passed small villages going about their daily lives, and got views of the much narrower lower gorge as the mountains recede and rice terraces stretch out into the distance. 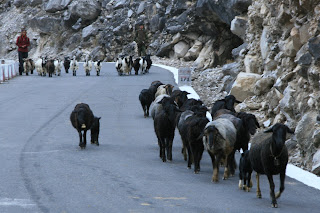 After three hours I took a dirt track across terraced fields and down a dusty road to the river. The water is calmer here and a small ferry came to pick me up but I must pay 20 Yuan for the ferryman to take me across the mighty Yangtze to the other side. Expensive, but a wonderful way to end the trek. 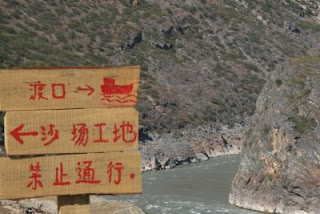 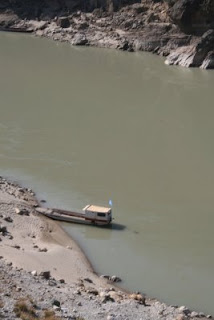 It's a steep heartstarter to the top from the ferry berth, then a gentle stroll into Daju, where I stay at the Daju Inn. I am the only westerner in this tiny village, where the houses are made from mudbrick with stone foundations, and the walls are very thick. I am toasty warm wrapped up in my duvet overnight. 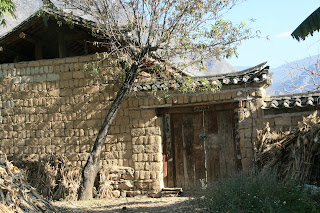 More photos of TLG.
The next day begins before dawn, with a Naxi sandwich for breakfast and a mad dash in the dark by minivan to meet the bus in the larger Daju town. As I board the bus the first rays of sunlight are hitting the snow covered peaks of my destination for today: Jade Dragon Snow Mountain.

The climb out of the Daju valley is spectactular, though the hillsides are covered in frost and the water is frozen in the roadside ditches. It's cold, real cold. But the mountains are gleaming with snow and I'm off to see a glacier. And if I follow the instructions of my hosts at the Daju Inn, I'll avoid paying the 160 Yuan entrance fee as well! 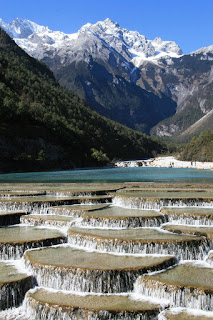 If you take the bus back from Daju to Lijiang, the bus is stopped at the entrance to the National Park and a fee of 160 Yuan is extorted from you, despite having only traversed the park. This fee only applies to foreigners. But if I stop off in the park, and take the local bus back to Lijiang, this doesn't get stopped as there is an assumption that you've already paid. And after watching numerous Chinese tourists ignoring the signs and sampling pieces of lichen and funghi to take home, I wasn't too keen on paying a "Preservation fee". 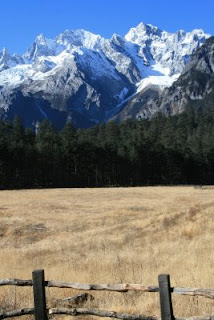 I took a cablecar up to a spruce lined meadow, a perfect site for some wideangle shots of the mountains. But the real McCoy was another two bus rides and a 170 Yuan cablecar ride up to 4060m, then a 600m climb up steps in oxygen depleted air to the viewpoint at 4680m. 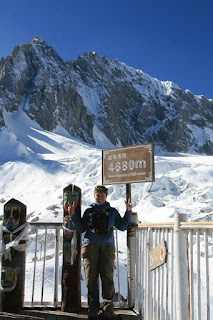 I immediately became a major tourist attraction myself amongst the many domestic tourists, as I posed with them for their photos. I befriended a couple on their honeymoon from Beijing, and some other tourists from Malaysia. What a lot of fun we had.
The cablecar back down and the busride back to Lijiang went by in a blur - I was exhausted! And I got away without paying the fee, what a bonus!!
More photos of the mountain