Chinese tourists far outnumber westerners, and there's lots of them. After struggling through the crowds in Lijiang it was time for a change of pace, so myself and Angela, a German woman I met at Mama Naxi's Guesthouse, headed off for the small town of Shaxi. 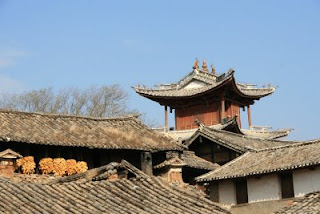 We booked into a traditional guesthouse, complete with courtyards and a very productive vege garden, then stepped outside to tour the town. We were immediately caught up in a wedding procession and ended up walking through the streets with the families, and being invited in for a feed. Everyone in the valley was like this: during our wanderings we were frequently invited in to family compounds for a cup of tea, or for a meal, the people being so friendly and welcoming. 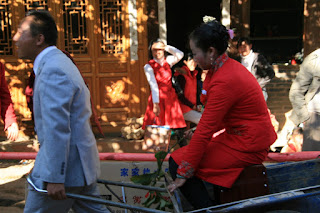 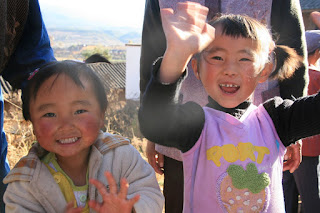 Shaxi was an important town on the old tea and horse caravan route, where tea from Yunnan was traded with horses from Tibet. Apparently it is the only surviving oasis on the old trail, and a huge restoration project began in 2000 to maintain the buildings and encourage ecotourism in the town. There is a temple complex and a theatre with stage, both of which required alot of work as they were wrecked during the cultural revolution. The explanation in the exhibit puts it better!! 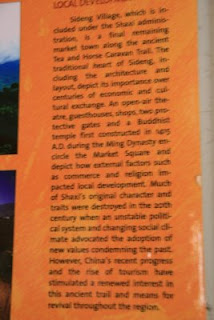 In the valley they are mostly Bai people, with some Yi villages up in the hills. Everyone comes down to town each week on market day, which is Friday, and this market is huge!! There are separate markets for clothes, for fruit and vegetables, butchered meat, fresh fish, poultry, and right up the end of town there's a special enclosure for all the livestock. The main street is stacked end to end with stalls, some selling some mighty weird stuff like the mouldy tofu which has 2 inch thick hair on it!! 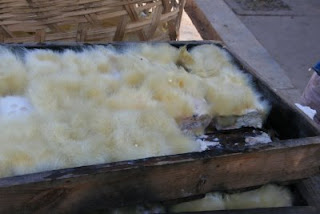 Angela decided to get herself invited to a Yi village and was last seen heading for the hills on a three hour trek, straw basket on her back. I considered going as well, but decided instead to head on, then changed my mind and stayed another day in order to climb a mountain. Typical, huh? 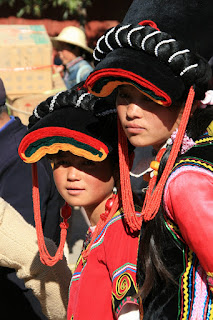 Shibaoshan is only a small mountain by my trekking standards, but it did have alot of steps to climb. It's home to a monastery and a number of grottos where very old rock carvings of Buddhas and Bai deities are carved. Unfortunately most were locked up in little wooden temples but I managed to get a few shots. 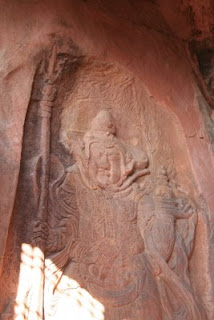 The real highlight was walking through pine forest, with patches of wild azalea, gorgeous rock formations and blue blue sky. The dog from the guesthouse accompanied me the whole way, yes I thought of how much Hazel would have loved it, and I had made a new friend for life! The walk back down, through stands of eucalypt trees even made me feel a bit homesick, dog and all! 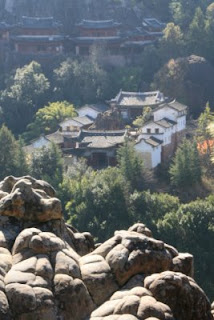 More photos of Shibaoshan
I then took a minibus out of town and another bus down to Dali where I stayed the night. Next I head south back into tropical weather, can't wait to shed the warm clothes!