Back last century an English writer in a flat in London wrote a novel about some people who survived a plane crash and ended up in a town in Tibet called Shangri-La. It's called Lost Horizons. He'd never been to China and probably used the articles of an eccentric Austrian botanist as reference. The Austrian, Joseph Rock, lived in Yunnan Province for 20 years or more and collected a huge amount of plant specimens and even was taking colour photographs back in the twenties! He wrote for National Geographic, and studied the local Naxi culture as well.
So a few years ago, with tourism becoming a huge money spinner in Lijiang, the Chinese government, with help from a Lijiang historian, declared that a small town in a valley in northern Yunnan province was the "real" Shangri-La. They used references to local landmarks in the novel to prove their argument. One problem, it's a work of fiction, but that hasn't stopped Zhongdian from being rebadged as Shangri-La and making alot of people richer!
All the same, a trip to Shangri-La is worth the effort as it's only a scenic four hour drive by bus up treacherous passes to the valley at 3200m above sea level. It has a lovely "old town" full of traditional houses and narrow cobble stone streets, and a Tibetan hill temple with a huge prayer drum which you can help the old ladies rotate. The weather is warm and sunny during the day, but the moment that the sun dips below the horizon you need to seriously rug up. 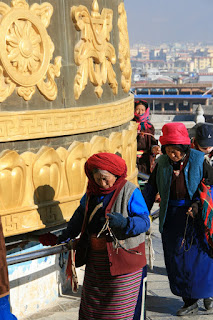 The town is predominantly Tibetan, with some more interesting outfits for me to photograph, and is surrounded by cute Tibetan villages and yaks grazing the fields. A bicycle ride north of town requires a little more effort at this altitude, but affords views of nearby mountains across a marshy wetland complete with waterbirds. 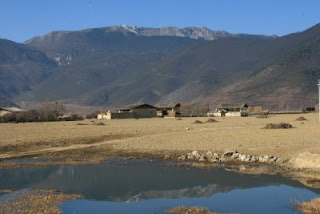 The greatest draw in Shangri-La is the Tibetan Monastery on a hill to the north. I had a lovely conversation with one monk, who showed me around, pointing out the various lamas and making disparaging comments about the Chinese government sponsored successor, whose photo must be displayed. His eyes lit up when I recognised the photo of the current Dalai Lama, and for that I got an apple to eat! 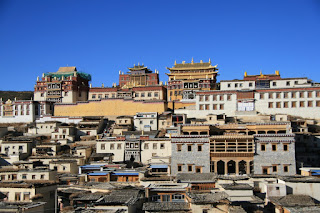 More photos
But it was cold in Shangri-La, so I hopped a bus south again, down the pass which now had frost and ice on it, and off to trek Tiger Leaping Gorge.