A weekend in Kunming

The China I visited 20 years ago has all but disappeared under the marching modernity of this economic powerhouse, at least in the cities, where very few old buildings or districts still exist, and the locals dress like everyone else in the western world. I particularly like the astroboy haircuts that the boys sport. 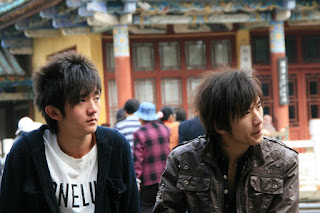 To find an echo of the past it's easy to head to Green Lake Park in Kunming to watch the locals enjoying the sunshine, playing music on traditional instruments and singing old Chinese songs. While the oldies sit around reminiscing and screeching in falsetto, the youngsters mill around, draping themselves against pagodas or beside cherry blossom trees and taking photos on their mobile phones. No not much has changed! 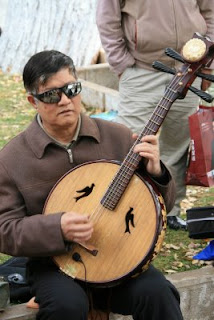 After arriving in Kunming on an overnight bus I wandered around and into a five star hotel where I got directions to a cheap hostel. Then I purchased a new guidebook so am now feeling much less lost and directionless. If ever a guidebook is worth its money it's in China, where the use of "Pinyin", Chinese written in arabic characters, has not taken off and everything is written only in Chinese script, including the maps. And not too many people speak any English at all in this neck of the woods.
The Stone Forest is 120km from Kunming and a perfect day trip. What actually takes just over an hour from the outskirts of the city is unfortunately prolonged by numerous diversions to shops and temples en-route. Despite my best attempts to take a public minibus, after waiting an hour and a half to leave I was shunted onto a tour bus, and three hours later we reached my destination. 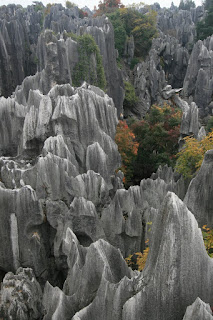 But it's hard to stay pissed off long, even with the exorbitant entry price, because the Stone Forest really is spectacular. Even though it was Sunday, the crowds weren't big and it was easy to lose yourself within the maze of karst peaks and feel like the place was all yours. There were traditional Sani dancing and singing performances, and places where you could dress up and have your photo taken (like would I do something that tacky??), and the ubiquitous souvenir shops and roaming ladies selling trinkets. But the star attraction of acres and acres of these limestone rocks made all those small annoyances totally trivial. 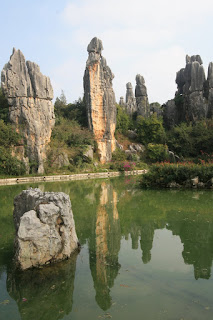 Judge for yourself.
I now head north to Lijiang, Shangri-La and Tiger Leaping Gorge. Ah the Chinese love their metaphors! 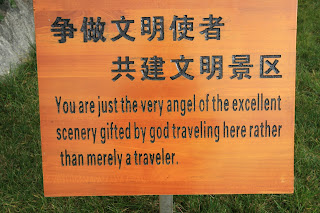