Modernism also comes to the ethnic minority people. They don't want to live in drafty wooden houses if they can afford to build a nice brick one, and the youngsters don't want to look different from any others of their age. That's what satellite TV does, turns us all into one homogenous global society. In fact walking around in any Asian city these days you'd be hard pressed to identify people's ethnicity without seeing their faces, it's all the same fashions as the west. Though the boys are much more adventurous with their crazy anime haircuts! 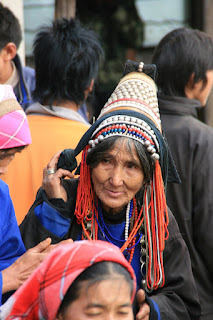 I spent an entire day getting to a small village in Xishangbanna called Xiding, which is home to a famous Thursday market. The road south from Menglian was under construction as it is prone to huge landslides. Our bus driver inched his way around trucks with only millimetres to spare between the wheels and a sheer drop into the valley below. Definitely the most scary trip I've done so far! 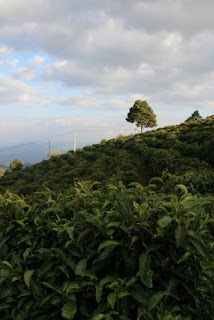 Xiding is up in the hills, almost permanently shrouded in mists, and still cold! Bummer, I'm not yet back in the tropics. It's also a tea producing area and the predominant ethnic group are Aini. Only a few old ladies still wore their traditional clothes, and the market itself was a bit disappointing, though I did enjoy watching them butcher entire pigs. They brought them dead and already scarified, but whole, to market on the back of a motorbike then proceeded to hack them to pieces. There is no part of a pig that can't be used it appears! Vegetarians and those of certain religious persuasions may not appreciate the following photo! 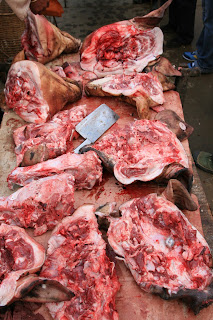 If I'd walked for a few hours I could have reached some more traditional villages (Xiding being a modern uninspiring town) but the only bus back left at lunchtime so it was on to the capital Jinghong on the Mekong River.