Getting the courage up to try your first loop takes guts. Will the trip be easy, or will it all end in pain and tears? And then there's the question of whether to try the forward or the back loop. The general consensus is that the forward loop is 95% attitude, 5% skill, whereas the back loop is more 50/50.

I spoke to others who'd done it, read the travel log at the guesthouse, and concluded that most people said the forward was the better way to go. The initial bit was easy going, just the last bit required a little skill. And it didn't hurt that much when you fell off!! But first I had to make that decision to go the whole way around or else I'd just end up bailing half way. 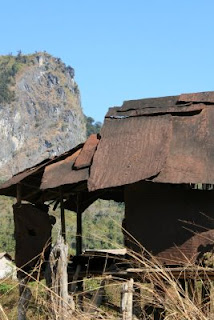 Now for all you non windsurfing folk, the above sounds like nonsense, but I thought I'd draw a parallel between my ongoing attempts to do a forward loop with the road trip on a motorcycle I completed this week. Part of the road is a nightmare of dust and trucks created by a huge hydroelectric project and I had to decide whether that part of the trip was worth doing it as a loop, or whether I would return the same way I'd come. So here is what happened: 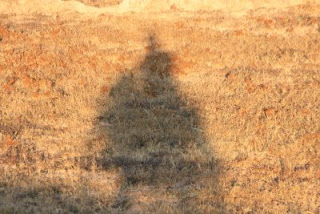 I hired a bike for four days in order to visit the Limestone karst area northeast of Tha Khaek, including a huge 7.5km long cave with a river winding through it. Stories abounded about the horrible dusty road along the eastern boundary, about the construction site and the joy of eating dust as truck after truck passed by. Didn't sound like I'd get to see anything going that way so decided to head north up the highway along a smooth bitumen road. This took 2 hours as the Chinese 100cc bike, nicknamed Xie Xie, didn't like going much over 60km/hr without sounding like we were about to be airborne! After a short rest to get the numbness out of my bum and fingers, the road continued east winding through beautiful karst peaks and past a scenic lookout with a spectacular view over the landscape below. 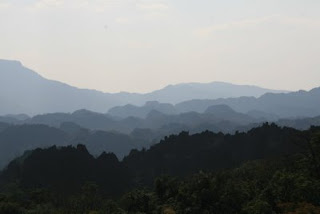 The descent into the valley was fun, now I understand why motorbike riders love winding roads. Laos roads are mercifully free of traffic so it's a delight to get out into the country on a bike and enjoy both the ride and the scenery. The valley runs south, surrounded by peaks on both sides, which slowly close in on the river running through. At the end of the valley the river disappears into a cave. This was where I was heading. 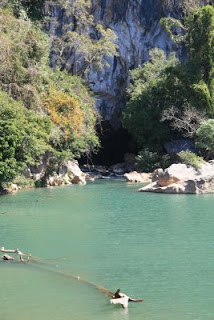 I stayed 8km up the road from the cave entrance, joining my German friend Marko from the Tha Khaek trek on a boat ride along the river as those walls closed in. Watching our boatman manoeuvre through the shallows and keep us from going aground was half the fun. At the cave I bid goodbye to Marko, who was returning to Tha Khaek by bike that day and had no interest in going through a dark old cave for an hour each way. He had a point, but they'd just put some lights in so there had to be something to see surely? 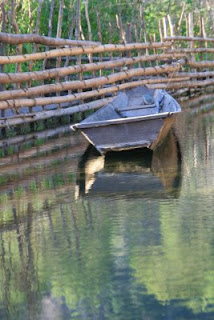 Well Shirley was right! A French organisation had completed installing a coloured light system in a gallery about 1/3 of the way into the cave. Most of the trip was in the dark, with a forward man in the boat directing the driver, both wearing head torches which weren't bright enough foe me to see anything more than a few shadows. But the gallery was superb, boy I wish I'd brought the tripod but if so I'd probably still be there! 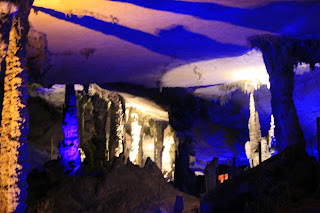 After arriving at the other end of the cave, which is 7.5km long, buying a drink at the stalls set up near the village there, it was back in the boat for the return trip. As we were now going with the current, the boatmen didn't have to haul the boat up the rapids: we just hopped out and they let the boat go over by itself and hit the beach on the other side. What a hoot! Soon we were back at the Konglor village entrance and the ride was over. 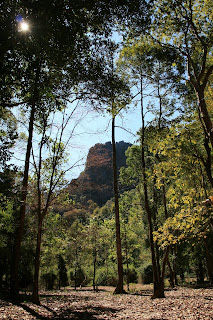 Marko had returned in the boat back to the guesthouse as I wanted to walk back. The rice fields were rock hard dry, but the villagers were growing a tobacco crop which made for some bright green foreground for landscape shots. I stopped at a river resort for lunch, only to find that the staff were all on holidays. However the manager cooked me up an omelet and I spent a pleasant hour chatting to him about his life. He and his family had escaped the Laos communists in 1979, swimming across the Mekong to Thailand and eventually arriving in Australia where he had finished his education at Crows Nest Boys High in Sydney. As things improved in Laos, his family gradually returned, opening up a series of resorts in Luang Prabang and southern Laos. So here he was, running a resort with no guests, living near a small village where the people knew nothing of the outside world in which he'd lived for half his life, and he didn't miss any of it. 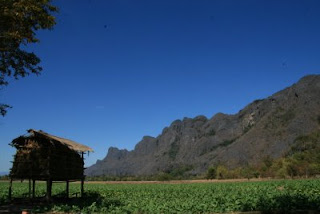 The following morning I headed off bright and early, experiencing the eery mist rising from the river and wrapping itself around the peaks. Soon after a noodle soup breakfast in the village of Na Hin it was a climb up out of the valley as the road headed east through more karst country towards the Vietnam border. I stopped to visit a small Buddha cave, now overgrown with jungle and quite serene. Soon I was in the town of Lak Xao and I had to make my mind up whether to turn around or commit to the loop. 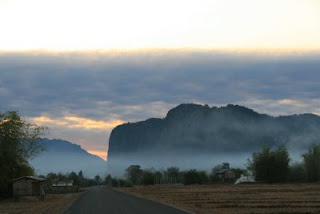 My windsurfing friends will be proud of me, I made the commitment and around I went! The road deteriorated almost immediately out of town, so it was slow and steady to avoid the huge potholes and sharp stones that could slice the tyres to pieces. There was little traffic and the scenery was a mixture of farmland and forest as the road winds through a wildlife corridor between two national parks. Didn't see any wild elephants or the like however! 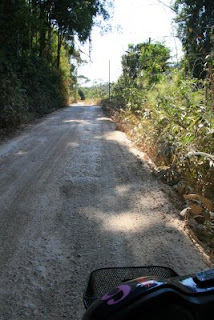 Further south the road improves to a smoothly graded dirt road, again no traffic, as Xie Xie and I entered the huge dam construction area. This is a joint French/Thai operation, with 95% of the electricity generated being sold directly to Thailand. Meanwhile, most rural Laos people have no access to grid electricity at all! The road continued to be a smooth ride, though the upper side of each bend was a sandy slippery accident waiting to happen. I just veered all over the road to keep to the hard patches, as did the locals. When in Rome..... 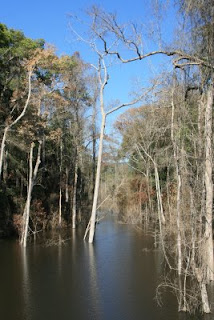 By 3:30 pm I'd had enough, so opted to stay the night at a small town called Nakai Neua. It was Chinese and Vietnamese New Year, which may have explained the lack of traffic on the road, and certainly explained the noisy revelling going on at the guesthouse. I poshed it up by going to a nice restaurant for dinner and having a medium rare steak and chips! Since most of the regular customers work for the foreign construction companies, I doubt that restaurant will be around next year once the dam is completed. 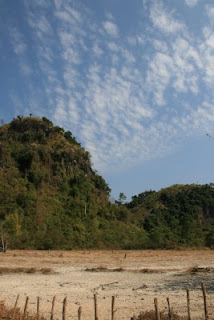 Day four saw another early start, after I'd push-started Xie Xie to get her going. She doesn't like starting first thing in the morning but nothing that a small hill can't fix! Nakai is on a plateau and the ride down the concrete road was a treat as I looked over the mist enshrouded valley below. 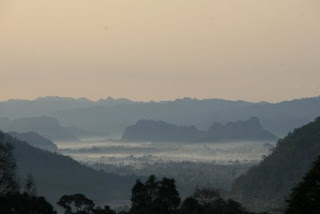 I'd made a good decision to stop at Nakai, as the next portion of road was the afore-mentioned dust and truck laden track between the power station site and the town of Gnommalat, where the bitumen resumes again. Yes there was alot of traffic, and yes the road was a bit rough from the constant use, but it was only 10 km and then it was a dust free sealed road all the way back to Tha Khaek. So just what was all the fuss about how difficult doing a loop was? 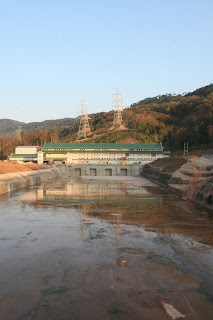 I didn't return straight to Tha Khaek, as at Gnommalat you re-enter the Limestone karst region and an area rich in caves, swimming spots aqnd a recently discovered cave with thousands of Buddha images. I by far preferred the much less often visited cave of Tham Pha Inh with its sacred pool and Buddha images surrounded by beautiful shawls and streamers. 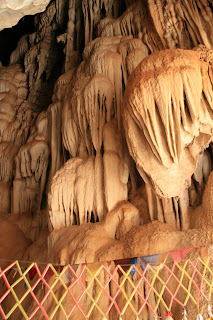 I was back in Tha Khaek by lunch time, so after a tour of a nearby Wat I bought a bus ticket south to Pakse, had a much needed shower and continued south overnight to visit the last big Khmer Temple before Angkor.
For photos of the loop.