Phonsavan, northeast of the capital Vientiane, is a modern day town with a lot of history. However today's story doesn't begin there, but 70km southwest of Sam Neua, near a village called Ban Nakorn. Here, standing stones and huge stone discs were erected on a series of mountain ridges by ancient people over 2ooo years ago. The discs hid burial chambers, but no-one knows why or who these people were. 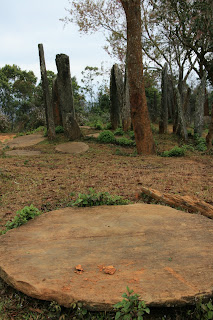 Getting to the stones involved a freezing cold ride in the back of a sawngtheuw for two hours to the village. We breakfasted on packet noodle soup, deposited our packs, and walked the 6km to the main site. There is a local legend that the stones were erected by a giant, about as believable as all those pagan worshippers at Stonehenge! 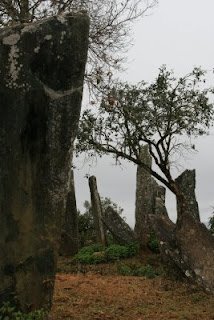 Back at the village we had to wait for a passing bus, so before long we were the main attraction for the local kids as Frankie convinced me to teach them the "Hokey Pokey". We learnt that if you are a village lady wanting to take your sacks of wood to market in Sam Neua and have been waiting on the side of the road for 3 hours, that the bus just might be too full and you have to wait another day! Luckily our bus picked us up, though we did have to sit on plastic stools in the aisle for six hours. And listen to all the locals spewing relentlessly. Actually they spew quite silently, until they clear their throats with a loud hoik! They're not quite as bad as the Chinese at spitting everywhere, but they are close!! 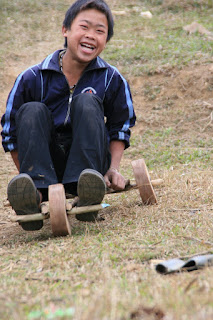 Phonsavan was cold, real cold, but luckily I still had all my clothes from China. The next day warmed up and we went on the no name tour to visit the usual jar sites, a bombed out russian tank and a Lao-Lao village. 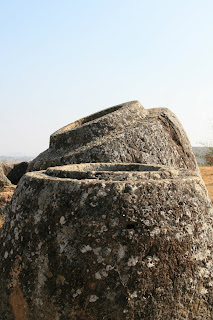 The Jars date from a similar time to the standing stones, and are mostly made from stone. They are clustered in groups, usually on hilltops, and are thought to be burial sites. Very scenic indeed, though the surrounding landscape was drought ravaged with a few stands of eucalypts. In fact it looked alot like Australia!! 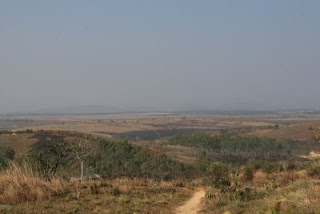 The Jars are also smack bang in the middle of one of the most heavily bombed areas in Laos. The Americans dropped cluster bombs: huge metal canisters which split in two midair and released hundreds of small "bombies" which spun and armed themselves as they fell. On impact they exploded, spraying ball bearings at high velocity over an area of about 250m. They were designed to kill, not maim, and were dropped in the millions over this area. But it is estimated that about 30% never detonated, and these little killers are lurking everywhere. Kids pick them up thinking they are a ball, farmers ploughing a field hit one, even workers building a new road are at risk. And they won't just kill the person who touches them, but everyone else within 250m!! And did I say there were millions of them out there? 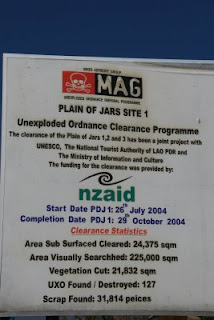 All these unexploded ordinance, or UXOs, mean that people are frightened to plough new fields, road building is hopelessly slow because full mine clearance must be done beforehand, and kids try and sell the stuff for scrap metal and can end up dead instead. And still "western democracies" make these bombs! for more info see http://www.maginternational.org/maglao/