The Nam Ou flows into the Mekong just north of Luang Prabang. We joined it at Hat Sa, 20km from Phongsaly for a leisurely cruise down river. The boats aren't too luxurious, and the rapids need skill to traverse, but it's a peaceful way to spend a few hours, watching the simple life of the villagers as we motor by. There's mostly forest along the way, with the occasional village perched above, and every few kilometres there's some ugly water to get through, those boatmen know their river well! 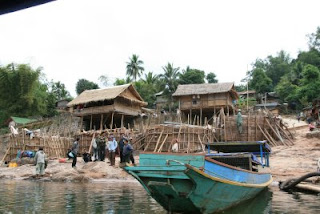 We arrived at Muang Khua, a frontier village on the way to the Vietnam border near Dien Bien Phu, about 2pm. No boats going further south that day meant a few hours of daylight to explore the nearby villages along the river. There we met a school teacher who was building a place to house students from remote villages so they could come to secondary school, out of money earned from taking people on treks. The poverty here, yet the generosity of those with little to spare, is quite overwhelming. 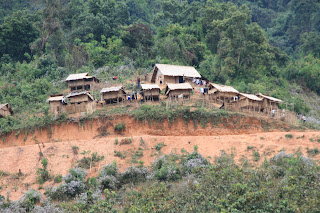 After a night in our pink guesthouse we continued down the river to Nong Khiaw, a gorgeous town nestled between karst peaks with a passable Indian restaurant. We visited a cave used to shelter villagers during the second Indochina war and watched some men ploughing fields for a new rice crop. For some strange reason we again chose a pink guesthouse for the night. 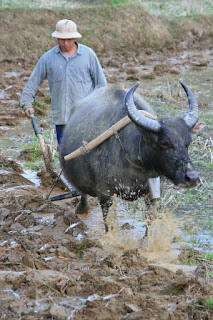 Next stop is Sam Neua, a 15 hour bus ride away on winding roads. Can't wait!!

Photos of the river trip here