The other way to Vientiane

I couldn't face it. Although I'd heard that the beauty of the scenery made up for the partying atmosphere of hundreds of drunken westerners, I just couldn't see myself coping with Vang Vieng. I've never been a fan of what I call backpacker ghettos, and after my experience in Luang Prabang I needed to get as far away from that scene as possible. So instead of the bus down the highway to Vientiane via Vang Vieng I decided to head down the western part of Laos. 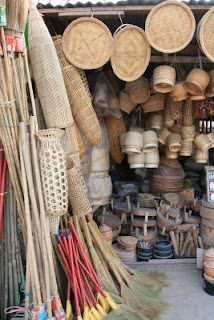 First it was a local bus to Sainyabuly, a province known for its working elephants. There are still over 400 being used for hauling logs in the rapidly disappearing jungle, and in an attempt to boost opportunities and income for the beasts and their mahouts a French NGO created an elephant festival in 2007. The next one is next month, and the town was gearing up for a big influx of tourists as a result. I'm not sure where they'll house them as it's a rather sleepy place with a nice market, friendly people and a pretty river flowing through. I got to practice my English constantly, from a young monk in a wat I passed through to a Vietnamese businessman at my guesthouse.

The walk to the bus station south of town was longer than I expected, but a friendly truck driver gave me a lift the final 2 km. I'd been warned that the trip south was on a bad, very dusty road, and a sawngtheuw provides no protection from the elemants. That's my chariot, the silver one on the left. 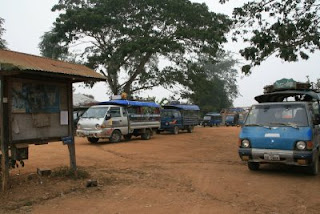 Yes the trip was a doozy, with my hair being a lovely grey by the time I arrived in Pak Lai five hours later. Nothing that a hot shower couldn't fix, then it was a wander around town to appreciate the lovely old buildings surrounding a village green. There was even a place selling coffee with a real espresso machine! 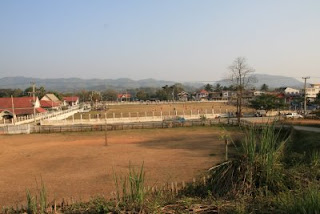 The boat trip down the Mekong was a leisurely affair, with bench seats to sit on and even a toilet! Comparing the sides of the river, where one side is Thailand with all the hills covered in intensive agriculture, the other Laos with just degraded forest, was quite a contrast. As the sun set we arrived at the port north of Vientiane and negotiated a tuk-tuk ride into town. Here I've had time to get all the pictures up, have a boozy night on the town with a Kiwi lass from Bangkok, and eat some nice international food. Having a break from the sightseeing for a day or two then it's back on the road.