Textile villages and hiding from the Americans

It was a long trip to Sam Neua: 15 hours on the back seat of a clapped out old bus. We arrived at 3am yet still managed to find a nice cheap guesthouse and get some sleep. The town itself is quite small, with a sprawling market which extends both sides of the river. There are lots of stalls selling to a mainly local market, so I was able to purchase some nice fabrics and pressies. More work for the postal service!!

There isn't much to see in Sam Neua besides a wat at the top of town, but it has excellent tourist services and the next day we took a six hour bus trip to a weaving village called Sam Tai. The lunch stop enroute was in a tiny village which caters to the daily bus service, where you can purchase some sticky rice and some meat. We decided against the cooked rat offered us, I have to admit to being not that adventurous!! Luckily we had fruit to tide us over. 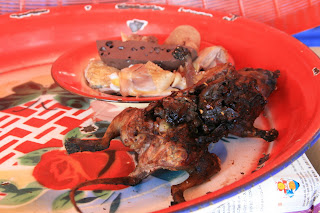 Sam Tai is a sleepy little town in the middle of nowhere, but it's famous for its silk weaving. Almost every house has at least one loom with a work in progress, so it was just a matter of going house to house asking to look at their wares. Some of the work wasn't great quality, but some was superb, and the prices were reasonable. I'm sure the really good stuff goes straight to Vientiane or Luang Prabang, but it's nice to visit the weavers and buy directly from them. 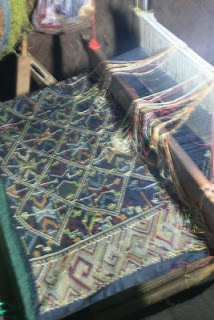 We almost stayed longer, as we got invited to a wedding and to join the bride back to her husband's village, but Frankie's visa was running out and this was the sticks afterall. So next day we took the same rattler back up the road to Vieng Xay. 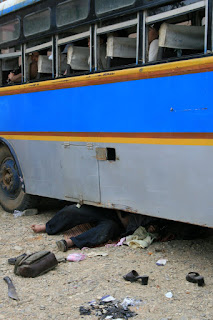 Vieng Xay is spectactularly beautiful. It's a narrow valley surrounded by wooded karst peaks, and in these peaks are hundreds of caves. The caves sheltered the Pathet Laos, a communist group who were fighting a civil war against the US backed Royal Laos Army. Not that the US has ever admitted to being involved, in contravention of the Geneva Accord. The Pathet Laos lived in the caves for 9 years, whilst American planes dropped more bombs than were dropped during WW2 in Europe. Eventually the Americans left, the communists won and have held office ever since. 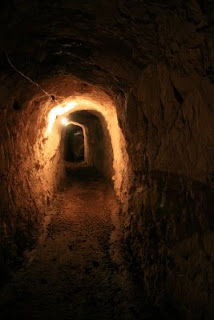 The caves housed military personnel and the top commanders, as well as stores, hospitals, bakeries etc. There is a huge theatre in which even foreign performers from Cuba, Vietnam and Russia came, and ceremonies were held. Many of the caves were modified to be more homely, and after the bombing stopped they built houses outside the caves they'd lived in. Each member of the politburo had different architectural tastes, so the houses are a very eclectic mix of the various Laos styles. One house even has a swimming pool fashioned from a bomb crater!! 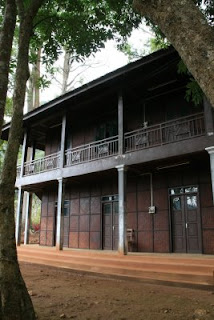 UXO is a huge problem here, as up to 30% of the bombs dropped didn't detonate. Very little of the area has been cleared, so there's no wandering off into the bush around here!

Vieng Xay has a lovely market, complete with the usual assortment of wildlife for sale. Squirrel anyone?? 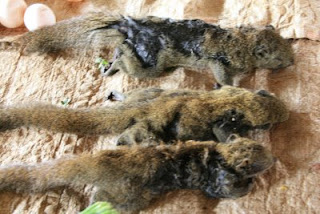