Where the Kham River meets the Mekong sits the World Heritage listed Royal City of Luang Prabang. After the second Indochina War the remaining royalty were all sent off to re-education camps by the conquering communist Pathet Laos, where they died of starvation and illness. The study of Buddhism was banned for a while, but now the monks are being given more freedom and the Royal Palace has been restored as a museum for the tourists. In fact the noise of new constructions and renovations on old French colonial and traditional Laos buildings can break into the peace of this tree lined old town. 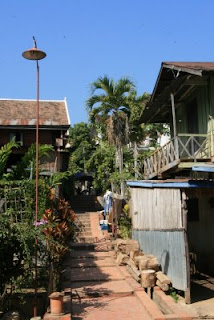 Not since Hanoi have I seen so many Western tourists in one place, complete with international restaurants and prices. I'm not yet craving western comforts and was surprised to find myself experiencing a strange kind of culture shock. I wanted to get away as soon as possible and back to the "real" Laos. 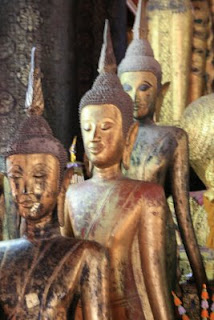 But Luang Prabang is an important place in Laos' history and culture, so a visit to the numerous wats and museum is a must. The beauty of the architecture, the leafy streets, and the gorgeous inlaid murals on some of the wats certainly make it worthwhile. It also has a huge night market, selling handicrafts from Laos and beyond. With overinflated prices to boot! Glad I bought my goodies elsewhere! 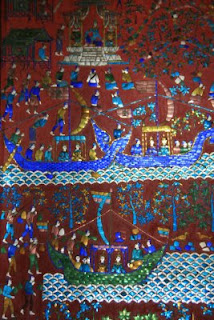 It was also time to offload some gear, firstly my purchases in the post, then some excess clothes to the local Red Cross. It's still too cold to dump the warm clothes, wonder how far south I need to go yet.

Luang Prabang is famous for the daily alms given by the people of the town to the hundreds of monks living there. It's a colourful spectacle of orange robes and devout believers, and has become a tourist magnet as a result. The numerous street sellers trying to sell rice for the monks was my first experience of hard sell since I arrived in the country. I just took a quiet seat in a good vantage point and took lots of snaps. 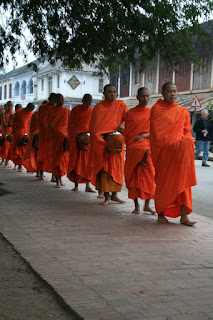 Then I packed my bags and left town!

For photos of Luang Prabang