Getting to Palupuh, a small village about 16km north of Bukittinggi, turned out to be a little more complicated than expected. What should have taken 30 min ended up taking over 2 hours. The hotel reception directed me to a spot just down the road where I could catch a minibus there. I found the spot, but just some deserted buses, so I walked a bit further on, to be redirected back. Yes, I was informed, this is the bus. So I waited. Along came others, some of us even sat in the bus. And waited. After about an hour there were 6 adults and 2 kids all awaiting the service. Still no driver. So everyone left and headed back to the main road to try and flag down some other transport. I followed. In the end we took a small opelet around the northern kampongs before alighting at an intersection and cramming on like sardines to a public bus. 20 minutes later I was in Palupuh. 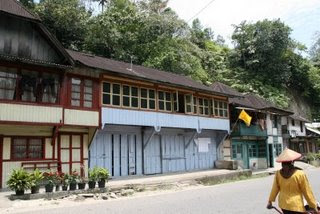 At Palupuh it's just a matter of hooking up with a guide who will take you to see the Rafflesia. These are the largest flowers in the world. They come from a fungus which only grows on one particular type of Liana vine and they only flower for 7 days. They pollinate by exuding a rotten flesh smell which attracts insects. The one I saw was only partially open but you could still get the impression of them. It didn't smell too bad yet either!! 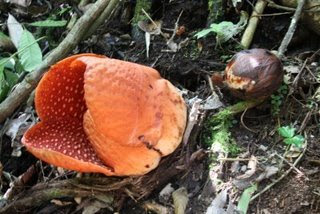 Also at Palupuh are the Amorphophallus lilies, which are the tallest flowers in the world. Unlike the Rafflesia, they are a tree meantime. You can tell they have flowered as the tree dies and the flower forms in its place, also exuding a filthy rotten flesh smell. Apparently the seeds can be easily propogated. The one I saw wasn't in flower, still a tree, and I can't really imagine it surviving a hot Geraldton summer anyway!

To my surprise there is another treat awaiting the intrepid traveller to Palupuh - the delights of Kopi Luwak. Kopi Luwak is coffee that has gone through an extraordinary process which takes the bitterness out of the taste and provides the coffee with a smooth almost chocolate like texture. The process is as follows: a small mammal, known as a palm civet, or luwak, smells out the ripest best quality coffee cherries and eats these exclusively, rejecting any that aren't that nice. The luwak also eats other fruits, small insects etc. After about 24 hours it shits out the coffee beans, which are of course the seed of the cherry. The luwak poos are collected, dried, then the husks removed. The beans are in fact green, which distinguishes them from non luwak coffee beans, these are then roasted and then made into coffee. 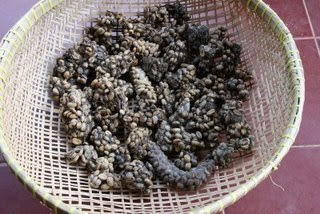 The Luwak poo at Palupuh is collected from wild Luwaks, who feed in the coffee plantations. The lady running the business gets paid $45 a kilo for one kilo of green (non roasted) beans by her Dutch and Australian import partners. In the west roasted beans can cost up to $1000 a kilo. Seems to me someone's getting ripped off here.....


I returned to Palupuh 2 days later to find the Rafflesia fully open and to appreciate the smell just that bit more. And to have another cup of Kopi Luwak of course. This time the minibus was full and we were off within seconds of jumping on the bus - all 17 of us!!! 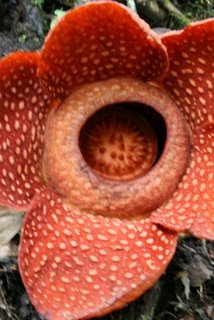