It was time to climb a volcano. Over the last few days I've been travelling with a french couple, Gerard and Chantelle, and we all booked the climb up Merapi.

Merapi is 2890m high and the climb begins at 1300m. We elected to do a day walk - many people climb at night to be on the summit for the sunrise - so the day began with a 4 am wakeup, for leaving at 5 am.
First hitch was that I'd been unwell, with a slight case of the squirts, so had had very little sleep, and no food since lunch the day before. I brought along some rice, and lots of sugar filled snacks, but had not got past the nausea to actually eat anything. I had taken an anti diarhoea pill, which held me in good stead for the day thank goodness.
Second hitch was that I had packed my large pack with lots of water, my camera gear, snacks etc in preparation for what I would need to carry up Kerinci, a climb which is a further 1000m uphill than Merapi. No sleeping bag and no change of clothes, but otherwise a fair go at practice for the big one. I was probably carrying around 8kg on my back, much more than any of my climbing companions.
At 5am, we headed off in the minibus for a half hour drive to Kota Baru. We stopped for breakfast - I declined - then drove up a small track to the starting point of our climb. It was only just getting light and the summit was completely clear. It was cool and not too humid, a perfect day for climbing. 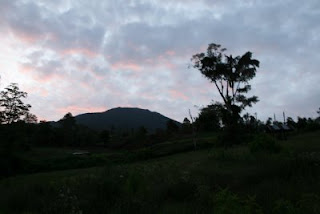 The first part was fairly easy, along a path, across a bamboo bridge and then into the jungle. The path was strewn with garbage but it wasn't wet or slippery and it was fairly easy to scramble up using the roots of the trees for footholes. 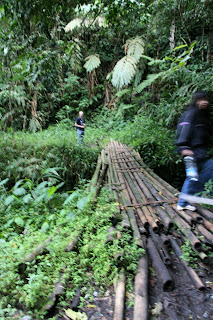 After an hour the climb got more steep, and my energy was beginning to wane. I stopped for a rest and had some rice, then continued on. I was sweating profusely and feeling nauseated. The others were in no hurry so were happy to stop and wait for me. Only the problem with being last is when you catch up, they head on again so you actually get less rest, not more.
By 2 hours I was a wreck. Although Gerard had offered to carry some of my load, I had declined with the stubborn view that this was practice for Kerinci and if I couldn't make it then I was not going to make Kerinci either. My sand dune practice seemed a waste of time (admittedly I'd done less than I should have before leaving knowing I'd have a few volcanos to practice on before Kerinci) and I felt a complete failure. I decided to stop and let the others continue on without me for the further 2 hours to the summit and I would wait for their return. I had food, water and a jumper, I would be fine.
The others left. I took off my pack, put my jumper on and lay down and had a rest. Animals and birds started moving around near me. It was very nice and peaceful. I had at least 4 hours to wait.
I got cold, despite my hat and jumper as my shirt was wet with sweat. I decided I needed to move to somewhere where there was some sun coming through the canopy so I could warm up. I couldn't go down, as the guide would worry if I wasn't where he had left me, so I decided to go up.
I followed the trail, heading further and further up. A few spots were sunny, but also full of garbage. I decided to head for the treeline. Before I knew it I had reached it and could see the others climbing the scree above me. I called out but they didn't hear me. I decided I would climb the scree. This is where my boots came into their own as the stiff sole and ankle protection made scrambling over the loose stones not so difficult. The path zigzagged its way up a ridge and suddenly I was on the top! 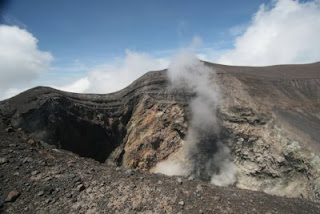 What a feeling of elation! I'd done it, climbed my first volcano, with a fairly heavy pack and with a funny tummy. But where were the others? The crater was deserted, but for a small party of young Indonesian students who looked like they had camped overnight. I asked them and they pointed over the crest of the crater. I crossed the crater to the further ridge and there was the active crater, spewing smoke and sulphurous steam into the atmosphere. The others were way over the other side so I followed the ridge path around to meet them. They were very happy to see me and glad I had indeed made the summit.
We had lunch and then it was time for the descent. By now the clouds had settled around the mountain and even though it was sunny on the summit we would descend through the clouds. Occasionally some cloud would come flying over the crater where we were picnicking and fog us in. Kind of spooky.
Down the scree was more difficult than climbing it, but again my boots proved their worth. Gerard began to have problems with his toes being squashed by his shoes, at least that was something I didn't have to worry about. As we descended further, the energy in my quads got less and less, such that I could only take small steps. More like a shuffle. Again I was last and again the others would wait for me and then head off when I arrived. In the end they went off ahead and I just took my time, though getting slower and slower. The final half hour was pure torture, but at last the minibus came into view and it was straight home to the hotel, hot shower and straight off to sleep. Not even the muezzins could wake me!!
I'm bloody proud of myself. I'm sore, and my tummy's still a bit funny, but I made it up and back in one piece carrying all that gear so I reckon with a bit more training I'll be ready for Kerinci.
for more Photos