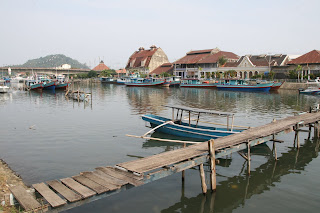 You'd be surprised how many people go surfing in Sumatra. The plane is full of surfers on their way to resorts or liveaboards on the Mentawai Islands. Outside this bunch of tourists, there are few other westerners and few Padang people speak english. So far I've been lost down a few side streets in my usual wanderings around town, I've had a great feed of the Padang food, and had some fun conversations with a few locals. There isn't much info available on Padang, it seems to be a transiting point rather than a destination in its own right, but it's really quite a pleasant little place on the seaside. It's loud, dirty and rundown, welcome to Asia!!
The old part of town is full of rundown Dutch buildings and old warehouses, lots of interesting architecture to photograph. A river runs through to the ocean so there's the usual fishing boats and evening promenading, complete with small food stalls. I had the most awesome barbequed corn for dinner - marinated in a mixture of spices and coconut - delicious.
Padang is known for exporting its cuisine throughout Indonesia. A normal meal involves the setting out of numerous bowls of different foods, from beef rendang to different vegs, to beans and fish. You get a big plate of rice, a bowl to wash your eating hand in and then you tuck in. You only pay for the dishes you eat, so the best bet is just to try 2 or 3 at a time and try a different 3 next time. I'm a sucker for rendang so that only gives me two other choices. I'm going to be here a while so it shouldn't be a problem. 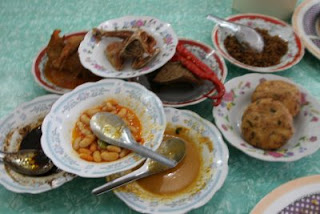 I wandered through the market, taking the occasional photo and being asked by the shopkeepers to take pictures of them. What a scream they are and so happy to see their picture on the camera screen. Over in a nearby park some men began talking to me. One was a "gayboy" so we had a bit of fun with him playing up for the camera.
Back at the hotel it's surfers and more surfers. A really nice bunch of guys, many who work on the boats and gave me a few tips on places to go. A few scotches and vodkas later, I crawl into bed.
The hotel is a little expensive for my budget but still dirt cheap by aussie standards. It's a converted Dutch Bank, sitting right on the river with a breezy balcony just beckoning you to sit for a while over a coffee/beer etc. The rooms are huge and full of this amazing furniture. Had a little look at some of the other places in town, this is certainly the most atmospheric by a long shot. 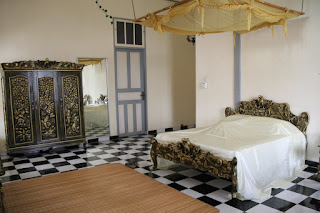 Next I head for the hills.