Legend says that a javanese king wanted to conquer the people living in the hills above Padang but he was having some trouble doing so. In the end the fight came down to a bullfight. (Given that this society is matriarchal I find it somewhat surprising that it all came down to a show of machismo, but perhaps the ladies just let their men have some fun!) The javanese king brought along his prize bull, winner of many fights. The locals starved a young calf for a couple of days then tied knives to his head. When the fight began, the calf nuzzled up to the big bull, effectively disembowelling him and of course winning the fight. So Minangkabau supposedly means "the bull winners" and the traditional houses have curved roofs resembling bull horns. 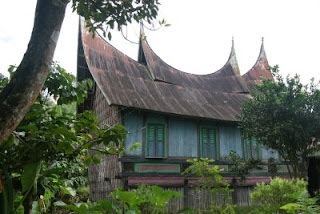 As mentioned earlier, the society is matriarchal, with property handed down to the women not the men. On the surface this isn't obvious as men still seem to sit around smoking and doing nothing while the women work their butts off.

The easiest way to get a good gander of the area is to join a day tour of the region. Four of us in a minibus visited old villages, a waterwheel powered coffee grinding business, 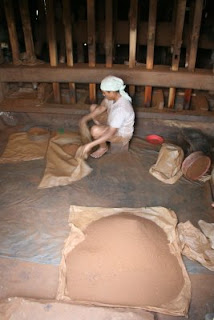 one of the nearby crater lakes, and some of the traditional meeting houses.

Apparently, the more daughters you have, the bigger you have to build your house as the husband moves in after marriage, not the other way around. It's pretty basic inside, with a small cooking fire in one corner as you enter. The meeting houses, however, are a bit grander, complete with all the kitsch trimmings. 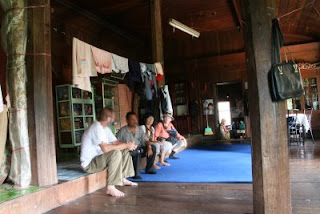