Can food really taste this good? 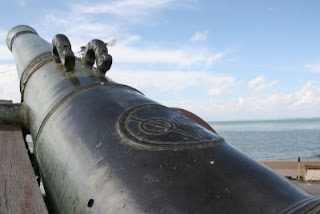 In July, Malacca (on the other side of the strait in mainland Malaysia) and Georgetown (on the island of Penang) got put on the Unesco list of world heritage sites. Georgetown was settled in the late 1700s as an outpost of the English East India Company and rapidly inhabited by Chinese merchants, Indian money lenders, Malay workers,Arab scholars and numerous other nationalities. Until plane travel became more affordable in the 1960s, Penang was the major stepping off point for Muslims taking ships to Mecca for Haj. 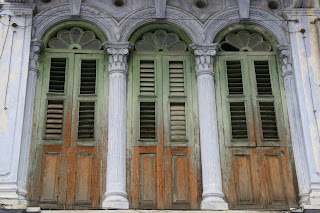 The English designed the town on a grid system, but various areas were settled by different immigrant groups. Streets initially named after English lords were changed to reflect the ethnic group that lived in that area eg Aceh St, or Burma Rd. So today it's an amazing melting pot of predominantly Asian cultures, with all the wonderful food that goes with it. 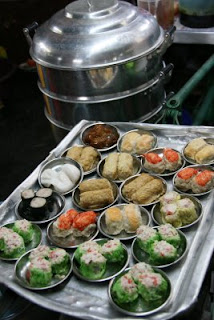 The Chinese were the great businessmen, forming associations based on family and business connections, and many of these clan houses are still in use today. As philanthropists, they also set up many schools and looked after new immigrants. Being the largest community, they tended to encroach a little on the others, such that you can be walking along a road full of chinese shops then suddenly find yourself smack in the middle of Little India, complete with sari shops, loud music and Bollywood posters! 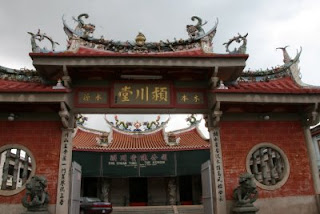 Now did I mention the food? Well there's Chinese food, like dim sums for breakfast and noodle soups, or something called lok lok which is a sort of help yourself buffet of food on skewers that you dip in boiling water to either reheat or cook the contents, then dip in a sauce of your choosing. The skewers are colour coded so you hand in your skewers when you've had your fill and pay the summed total. Some of the food is unidentifiable, best not to ask! 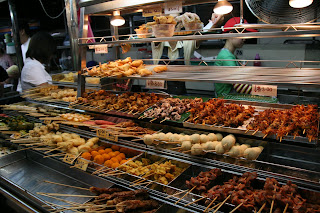 Then there's Indian food, like Nasi Kandar which is rice with your choice of curry. Or there's the banana leaf restaurants where you get rice on a banana leaf and a selection of curries, a thali in essence. Not to mention the stalls selling all the finger food, from samosas to sickly sweet halwa. 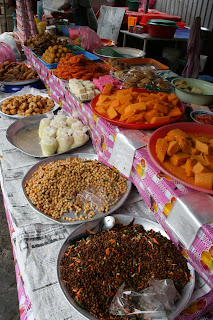 At night there are various hawker centres that open, so you can choose from a huge variety of food stalls, all freshly cooked on the spot. It's a riot of colour and cooking smells, definitely worth experimenting with what's on offer. 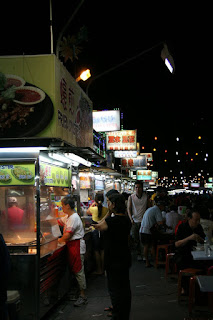 A particular type of cuisine unique to Malaysia and Singapore is Nonya food. Baba-Nonya is the name given to Chinese who took on many malay customs, and their cuisine is a melding of malay and chinese food. It uses fresh spices and quite alot of coconut milk, and is said to be some of the best food in the world. Well with claims like that I searched out a restaurant renowned for its traditional nonya food and asked them to prepare me some dishes that truly represented the cuisine. What a mouth watering treat it was! Yes it lived up to my expectations, my gosh it exceeded them. And having left the experience till my last evening in Penang, I was unable to return for more! 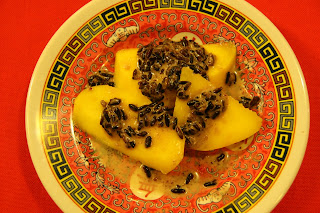 Besides eating food, there are other pursuits besides lazing on the beaches to the north of Georgetown. There are some excellent museums including one which is a restoration of the house of a famous chinese merchant, who was known as the Rockefeller of the East. It was built on Feng Shui principles and it is actually possible to feel the energy at the centre of the house. You may have seen the house in the movie Indochine. 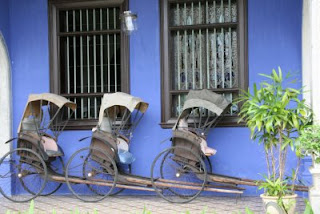 There's the butterfly farm (thanks mum for that suggestion), with a big collection of live butterflies flying around in an enclosure, as well as scorpions (they were well kept behind glass thankyou very much!), some lizards and turtles, and a curious collection of stick insects who take camouflage to new heights. I experimented a bit with some macro shots on these alien creatures, yep I know where the inspiration for those movies came from! 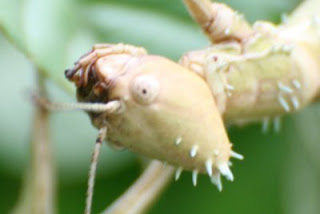 Nearby is a wonderful garden planted with spices and other tropical plants, which was a delight to wander through and to spend some time relaxing in the huge wooden swing suspended in the canopy.

I could have stayed weeks in Penang, eating my way through the countless food options available, but the road beckons and it was time to board the overnight train from Butterworth and head to Bangkok.