Deep in the heart of Aceh

Heading north from Ketambe seemed a good idea. I wanted to see a bit of Aceh but wasn't all that keen to go all the way to Banda Aceh on the northern tip of Sumatra. I didn't want to go scuba diving on Pulau Weh, and the rest of Aceh is in shutdown mode as it is Ramadan. Aceh is governed by Sharia law, which means for the month of Ramadan the restaurants, schools and even internet cafes are closed during the day. There's still lots of food to buy at the markets but it's kind of take-away and then stuff your face in the privacy of your hotel room. 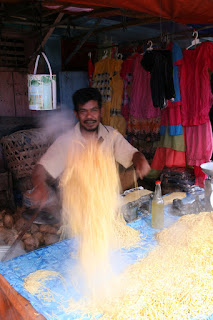 Takengon is the capital of the Gayo Highlands, in central Aceh. It was also home to the GAM separatists who for 30 years or more had been waging war on the Indonesian government in an attempt to obtain autonomy and a better share of the rich natural resources which Aceh has. This left the people both terrorised and in extreme poverty, causing many to leave the province to find safety and jobs elsewhere in Indonesia.

The tsunami in 2004 effectively kickstarted peace talks between the GAM and Indonesian government, and allowed the influx of overseas aid and NGOs who have helped develop economic programs for the impoverished Acehnese. We in the West tend to focus on the tsunami victims, but the effects of years of conflict on the population has been a much wider problem.
With peace and stability at last in Aceh, many Acehnese have returned home to start up again, bringing both money and expertise from their years working elsewhere. One couple I met were Alex and Nudia, who lived in Bali for 20 years, making and selling shoes in the lucrative tourist market until things went belly-up for them with the Bali bombing. The tourists dried up and so did their income, so post tsunami they decided to return to Takengon, where Nudia's family come from. Initially they set up a restaurant, which did well on the NGO trade, but with withdrawal of UN peace monitors they were again losing money and it was time to close that as well. Currently they are having a well earned holiday and after Ramadan plan to commence their next business venture. 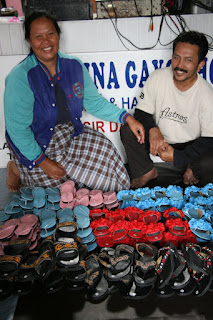 Alex learnt to make shoes while he was in Bali, with Nudia being the design guru. Other members of the family, who have also returned post Bali bombings, have expertise in the business so they will be obtaining a government grant to teach ex-GAM fighters to make shoes. There are currently no shoemakers in Aceh (all shoes are from Medan) so it will be an exciting new economic venture. Many ex-GAM fighters know nothing but fighting and intimidation of villagers, so teaching them worthwhile job skills is a key incentive of the fledgling Acehnese government. Now that the provincial govt controls 70% of its own resources they are in a position to rebuild Aceh into the economic powerhouse it used to be. But corruption is never far below the surface, so Acehnese continue to remain sceptics.
Alex and Nudia made my stay in Takengon a joy, making me coffee when I was so desperate for a cup during the locked down day, and inviting me to join them for dinner, as well as cooking me a yummy black rice pudding which I now have the recipe for. I am also the first westerner to own an authentic Gayo made shoe, complete with traditional Gayo embroidered design. 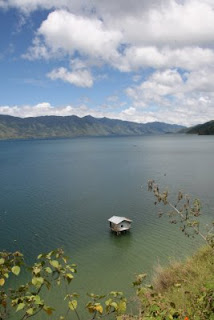 Takengon itself is a sleepy little market town on the edge of a spectacular lake. The markets, as usual, are a glorious display of colour, sound and smell. Local transport around town is by becak, motorbikes with sidecars, and the locals are all wonderfully friendly and helpful. They speak local Gayo language which makes my attempts at communicating in even my limited Indonesian somewhat of a farce. I went for some lovely walks along the lakeside road and visited some rather uninspiring caves, as well as hanging around the river watching the fishing folk. If this place ever gets on the tourist trail, I can imagine cute little bungalows along the lake shore, it will really do well. 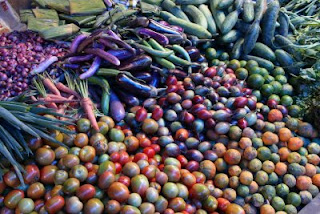 Next off it's the overnight bus to Medan then on to Berastagi and Karo highlands, and perhaps a bit more volcano climbing!