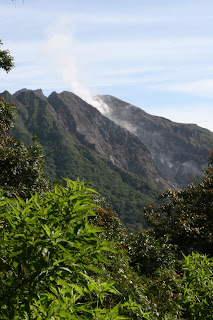 Well it just sits there, looking down on me every time I head up the main street of Berastagi. And it's only tiny, a mere 2,500m from Berastagi at 1200m above sea level. So why not?
Packed with ample supplies and water I set off at 8:30 am for a planned 3 hour walk to the summit. Well this one's an easy one, half of it is along a road and the rest is up a concrete path with steps! Sure there's a bit of a scramble over some rocks up in the crater but nothing like climbing the scree on my two previous volcanoes. 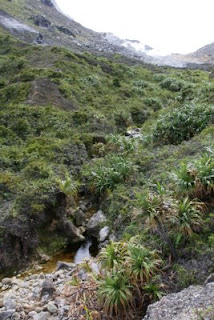 Sibayak hasn't one crater, but a whole series of fumaroles: high pressure vents releasing sulphorous steam. Pretty darn loud too. This makes it quite spectacular and a real change from your bog standard steaming crater at the end of a seriously hard climb (yawn, yawn!!). 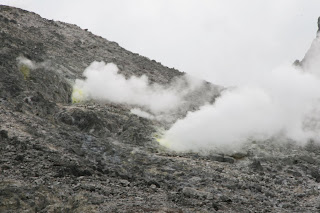 Now the walk down, that was a different matter. That was a scramble as the original steps have worn away and the going is quite steep. Gave the quads a really good workout, but hey, I'm a volcano veteran now and my legs seem to now be up for the challenge.

Celebrated (only took me 2 hours to the summit!) with a soak in the hot baths and a cold beer back at my lodgings. Commiserated with some first timers who really struggled doing it - hey I've been there too!

The rest of the photos are here