Chillin' out at Toba 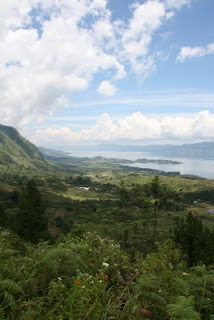 Lake Toba was my last destination in Sumatra, before heading over to the Malaysian peninsula. It was formed by an eruption 10 times bigger than Krakatau, that completely anihilated all plant and animal life in the region, causing distinct differences between the flora and fauna of north sumatra and that further south. It's also why there are no orangutan in the south (apparently!).

The lake is 6okm long and has an island, though it's really a peninsula with a narrow isthmus, in the lake called Samosir. One small section of Samosir, known as Tuk Tuk, was backpacker central until the late 1990's when the Indonesian monetary crisis caused an exodus of tourists who appear not to have returned. There is buckets of accommodation and countless empty restaurants, all keen for my business. Actually, it's a ghost town!
I stayed to the north of Tuk Tuk, on the recommendation of some fellow travellers I'd met weeks before, in a lovely spot right by the lake. An early morning swim was a nice way to start the day, particularly given that the temperature of the lake water was warmer than that coming out of the shower! 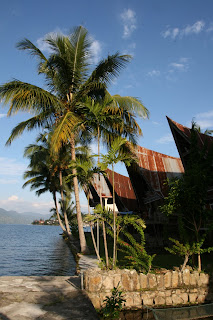 Toba is about chilling out, getting drunk, stoned and eating magic mushrooms. For the record, I only drank - my days of experimentation with drugs long over. It's also a place to visit local villages and to marvel at the weird gravesites which have progressed from ancient stone carvings to many different interpretations of a batak house, to those that look like churches, to more recent modernistic designs. All that money spent on the dead when it's still possible to see the effects of malnutrition amongst the population!! 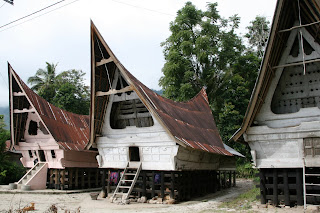 Toba Batak houses are different to the Karo Batak, with a greater resemblance to the houses of Toraja in Sulawesi. Besides the houses in the museum complex, I was unable to find another traditional house that hadn't had its palm thatch roof replaced with corrugated iron. But at least there are still entire villages remaining of these houses, often with addon renovations that have brought kitchens and bathrooms inside. The intricate carvings are always painted in the traditional colours of red, black and white. Even the catholic church gets in on the act, with a spectacular carving of Jesus. 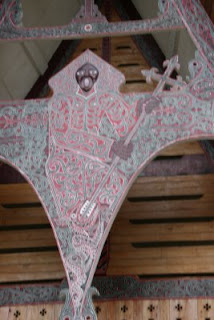 Toba is quiet, very quiet. Quiet enough for me to learn how to ride a motorbike without fear of the traffic. So now I'm confident with the handling of a small 100cc bike the sky's the limit!

And just for a little more culture, straight after the sunday church service the local dance group don their traditional costumes and perform a series of dances that celebrate their animistic past. Kind of ironic! 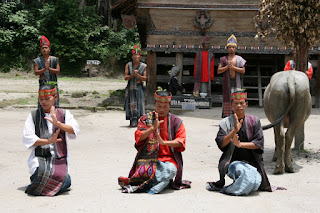 Numerous beers later, it was time for me to pack the bags, jump on a ferry then take a share taxi the 4 hours back to Medan to catch my flight to Penang.
More photos