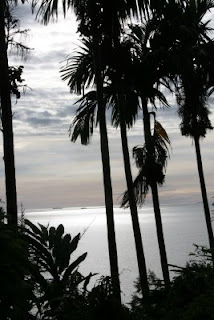 You know how it is, sitting around chewing the fat for a few hours waiting for a travelling companion to arrive, and someone mentions that a place nearby is worth a visit. Hang it, I thought, got 3 hours or so, I'll just go for a walk to Air Manis and see what all the fuss is about.

The "fuss" is a stone formation at the south end of the beach which resembles a broken ship. There are also a few rocks that do in fact look like dead people. The legend is that a poor man returns to the village having made his fortune but is embarrassed by his mother coming to greet him in rags so walks away. She curses him and turns him and his ship into stone. Trouble is, the Indonesians have heavily embellished the natural rock formation with concrete ropes, barrels and the likes so it looks more like a trashy theme park surrounded by equally questionable shops and drink stands and not worthy of a photograph.
Getting there took a little longer than I expected. A walk to the end of the river then up steps and through an overgrown chinese cemetery, then along various little tracks past houses perched along the hillside to a road which then winds its way back down the hill to the beach. The walk took a good hour and a half and then it was a matter of heading around the headland and along the surf beach to the rock formation. Being a surf beach, the waves deposit acres of trash on the beach, loverly!! 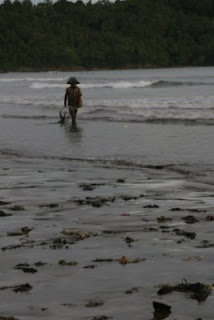 By this time the sun is setting and I have someone arriving back at the hotel in about an hour. No time to walk back, and I have no torch. Never fear, any person walking along a road is a prime target for the transport operators, and with no opelets running my only option was an ojek ride back to town. An ojek is a motorcycle taxi: sit on the back, hold on tight and get the thrill of a rollercoaster ride at breakneck speeds through the traffic to your destination. Disembark with jelly legs and pay the man for the priviledge. 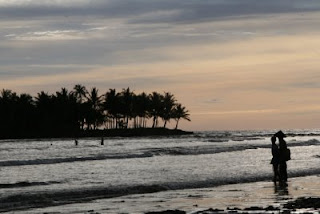 Next it's off south to climb a volcano, the big one!!