Looking up the relatives

For the bargain basement price of about 15 AUD it is possible to take a 30min scenic low level flight from Medan across the mountains to Kutacane. For the same price or more you can take a 7 hour bus ride. The hitch? Well it's a small double propellor plane, and you land in the middle of nowhere and have to negotiate a price into town. After a year or so flying in small planes in the NT small planes don't worry me, and the views were fantastic out the window. I opted for a bum-numbing motorbike ride the full 40km to my accommodation (which cost me more than the flight but heck, it saved me lots of time waiting for the local transport). 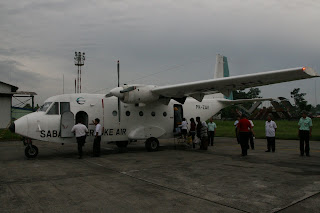 Photos of the flight
The action here is based out of Gurah, or Ketambe, where there is a research station in the Gunung Leuser National Park. This National Park is home to wild orangutan, the reason every one of us handful of tourists come to this end of the park. There are also rhinoceros and tiger but no-one ever sees them anywhere close to the villages.
Trekking here is a total twaddle, involving walking for an hour or less before each rest stop, really an excuse for the guide to have a cigarette. Total walking time per day is usually somewhere between 2-4 hours, with the morning being the best time for spotting our red headed cousins. Orangutan like to feed on ripe fruits in the morning then have a sleep for the rest of the day. If they're not moving around and chucking fruit discards away, you're just not going to find them up there in the canopy. They never come down from the trees, drinking water from hollows in the branches. And watch out for an angry one, woken from sleep so the tourists can take photos of him. He'll behave like the typical teenager, chucking things at you and making a lot of noise. Personally, I don't blame them, the guides can be pretty relentless at annoying the poor creatures. 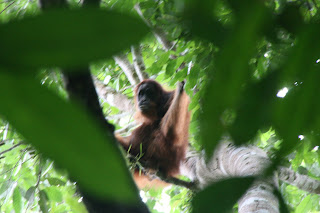 I was lucky enough to see five orangutan: the aforementioned angry male on the first day, then a group of four including one with baby, who were eating fruit and relatively unconcerned about our presence. 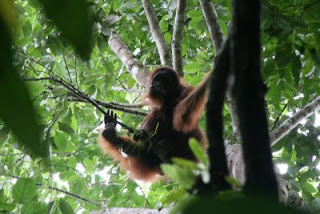 The trekking itself is quite slippery work, often involving a bit of jungle bashing to get to the best vantage points to see the orangutan. It also involves getting very close and personal with my least favourite animal - the leech!! I ended up with four of the blighters sucking my blood, but removed scores of others from my clothes and even from inside my boot. Slimey creepy buggers!!
We camped one night beside a river where the swimming was very pleasant after the humidity of the jungle, the second night at hot springs where rock pools have been formed as the springs merge with the river so you can bathe in the water temperature of your choice. 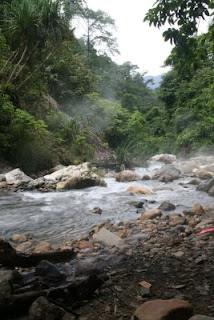 Orangutan aren't the only primates to see. There's the bog standard monkey, there are macaques, and these really cheeky Thomas Leaf monkeys who have a punk hairdo. There are also many birds, including hornbills, but I only ever saw the hornbills flying overhead in the evenings, though you would often hear their strange calls while in the jungle.
Back at my homestay it was time to purchase some fruit. Pak Mus, the proprietor, took me on his white motorbike up the road to buy Durian. You either love or hate durian, there seems to be no middle ground. Personally, I'm in the love category, just can't get enough of the creamy rich delicacy. I don't notice the smell, some people say it smells like rotten flesh, just smells like durian to me. Well I bought a few durian, so there would be enough for both myself and Mus' family. In the end we bought 10 durian, total price around 6 dollars. After feasting myself rotten on the fresh stuff, the family cooked up the rest and some sticky rice for durian pudding - what a taste sensation!! 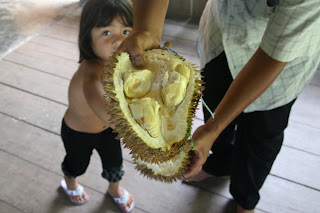