A week in Kerinci 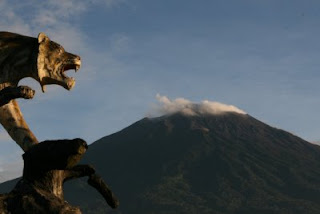 Kerinci Straits National Park is 200km south of Padang. Alex, a young chap from Reno, USA who'd decided to join me for some volcano climbing, and I headed down there in a rented car. Up into the mountains and along winding roads to our destination on the Karu Ayo plateau 5 hours later.

The plateau is at an elevation of 1400m above sea level and is home to the largest tea plantation in the southern hemisphere. It literally stretches for miles in every direction and it employs most of the people there. Watching the workers head off to the fields with their sacks, gumboots and conical hats while enjoying a spectacular view of the huge volcano in the background was a regular part of every morning spent there. Seeing them return laden with clippings and trudging home exhausted in the evenings makes you realise just how hard they have to work. 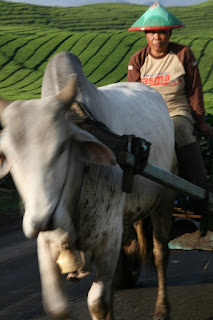 Bullock carts are still a feature here, particularly for those working the vegetable fields further up the slope of the volcano. If it wasn't for the continuous traffic in minivans, trucks and motorcycles going along the road, you could almost convince yourself you were back a hundred years.

We stayed at a homestay in the middle of the plateau. Although our aim was to climb Kerinci, the tallest volcano in western Indonesia, we decided to go to Gunung Tujuh first as the weekend was looking a bit crowded on Kerinci. We decided to camp a night up there and enjoy the surroundings. 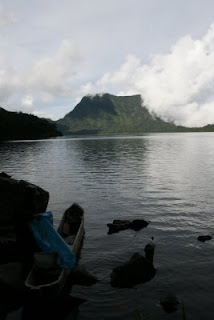 Gunung Tujuh is a crater lake with seven mountains surrounding it. It's not a difficult climb up to the descent down to the lake, but it is easy to take the wrong path. We picked up a guide who showed us the way. Alex and the guide headed off in some sort of hurry to reach the top while I just took my time enjoying the beautiful jungle scenery and not busting a gut when I had a big climb coming up in 2 days time. I had learnt from Merapi just to climb at my own pace with the knowledge that I would eventually get there. We had all day to do a four hour climb so I couldn't see the logic in ignoring the flowers, fungi and insects to be found on the way. 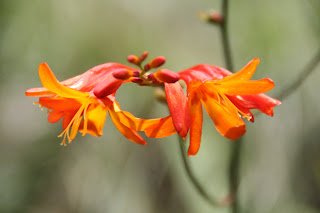 The lake itself is completely surrounded by mountains, and home to a rare pitcher plant, however we didn't know where to find it so mostly stayed around the lake. The different moods of the lake over the evening and next morning were wonderful to watch. 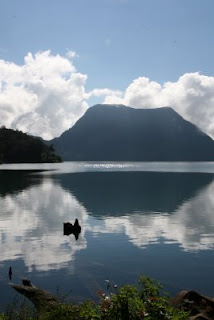 We returned back to civilisation the following day, via a circuitous route (yes we got lost taking the wrong path), and found an elephant chained near the track. Alex rather unwisely let it take his aluminium hiking stick, which it promptly broke into pieces and tried to eat. 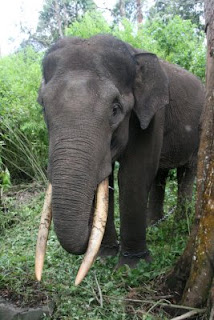 For all the photos click here
Next up was the big one, Kerinci itself. We hired a guide for the two days and headed off about 8:30 am. The lower slopes are typical rainforest, very lush and very muddy indeed. As you climb higher you reach beautiful moss forests, real Lord of the Rings type scenery. I loved it. Although there are tigers and rhinoceros in the park, all I managed to see were a couple of squirrels and monkeys. 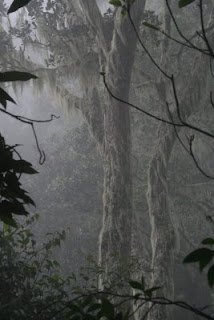 We camped at 3000m elevation and next morning at sunrise began the assault of the summit. Here the going got pretty tough as the track became increasingly steep. As we neared the treeline any bush you touched would release a cloud of ash - evidence that this volcano is indeed very active. 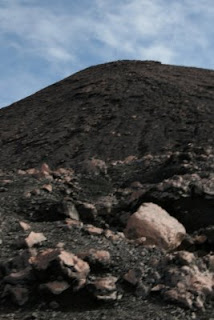 Above the treeline was a climb of 500m over ash and rocks to the crater rim. Alex headed off way in front while the guide and I made a slow and steady ascent. It was a tough climb, but the reward at the top was worth it. We were joined by a trio of Jakarta lads and it was photos all round. The view from the top is stupendous, especially over to Lake Gunung Tujuh, as is the massive crater giving off sulphurous steam. 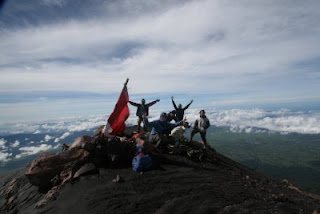 The descent back to the campsite was pretty hairy, as the climb down is often harder than going up. Hot noodles and coffee, packed up the tent and then it was time for the rest of the descent. It wasn't too hard and we were back in the tea plantation by 5pm.
In some ways it was harder than Merapi, like the final ascent, but the approach was much easier. My legs were definitely up to the task though I never at any time attempted to keep up with Alex, whose interest in anything but the top of that volcano was seriously lacking.
The following day we visited Sungaipenuh, the main town in Kerinci valley, in order to view a mosque made of wood apparently without nails. We were unable to view the interior as it was locked up and no-one was around to open up. 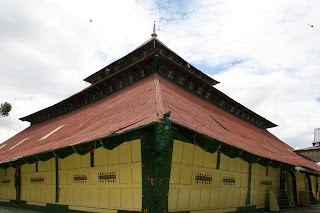 That evening I took a walk through the village in which we were staying and had some fun photographing the kids riding their makeshift billycarts down the hill. 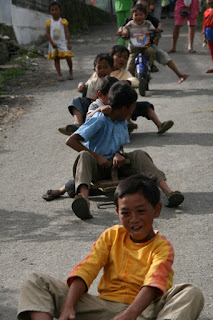 The morning we left, the volcano was spewing out large clouds of ash. It certainly brings into perspective just how dangerous it can be on an active volcano. In fact the trek is actually officially closed, but that doesn't seem to stop anyone. 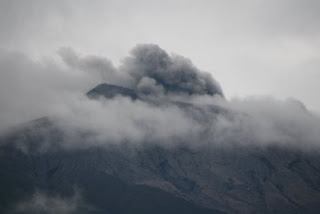 We took a bus back to Padang then it was farewell as I flew north to Medan. I'm on a flight to Kutacane in Aceh tomorrow to begin some more jungle trekking, so it may be a while till the next installment.
More photos