Here I am at last in Siem Reap, a rather modern little town in Northern Cambodia which is right next door to one of the great wonders of the world - The Angkor temples.

Most famous are Angkor Wat and the enigmatic faces of the Bayon, but the complex of temples is much bigger, spanning 3 countries, 5 centuries of construction, numerous wars and rebuilding of cities and differing religious beliefs that saw Hindu images being replaced with Buddhism, and vice versa. At its height of power the Angkor Kingdom spread east through Thailand almost as far as Burma, and north into Laos. It was defeated by the Chams from central Vietnam and then retaken, before eventually succumbing to Thai invasion when the capital moved to present day Phnom Penh and the temples slowly got lost into the jungle before their "rediscovery" by the French in the late 19th century. Phew!!!!
I flew from Pakse, as I'm running out of time before my return home and the road trip from southern Laos would take at least 2 days. Arriving at the modern international terminal and driving by tuk-tuk into town is a shock after the modest poverty evident in even the larger cities of Laos. Welcome to Cambodia, or at least Siem Reap, where the millions of visitors to the temples have created an enormous tourist infrastructure to support them, from luxury resorts and spas to designer label shops. They even banned the beggars from the streets to clean up things a little, bad luck that the kids just have to find some other way to feed themselves and family now. But that's another story...
I decided that since I was in tourist central, I'd posh it up for my stay and so booked into a nice resort with jungle pool, veranda, bar, restaurant, all the mod cons. It costs less than a night in a donga in Mount Magnet so can't complain, and it's about time I treated myself to a bit of luxury. It's now 6 months since I left Oz and I've rarely paid more than 10 USD a night for a room in all that time, so I reckon I may well have earned it!!
But that didn't mean I was going the whole hog. Armed with a seven day temple pass I mounted my trusty treadly (2 USD per day, money goes to a school for disadvantaged kids) and headed out to visit those temples. I was giving myself lots of time for exploring and taking photos and anyway, I needed the exercise. The tuk-tuk drivers continue to pester me, in a jovial way, about my plans for the following day, but they also begrudgingly respect someone who travels the way the locals do, on a bicycle. 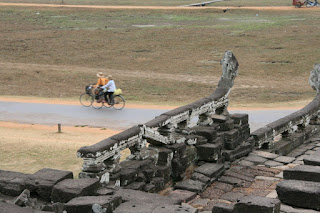 First stop Angkor Wat. I won't bore you with the history, and I'm sure everyone has seen stunning photos of the temples reflected in the water at sunset. But what I didn't know about Angkor Wat is that it is famous for a series of intricately carved bas-reliefs which encircle the entire inner enclosure. Some are of famous battles between the kings and the Cham, others are from Hindu mythology. I do apologise if some photos aren't so easy to make out, the stone is polished in places from numerous hands touching them over centuries, a practice now prohibited. 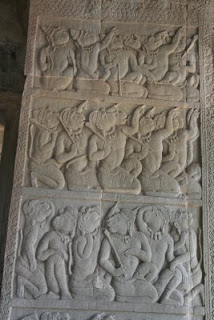 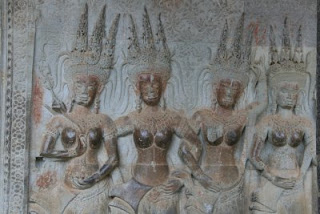 I spent an entire day just at Angkor Wat, soaking up the atmosphere, admiring the carvings and not being bothered at all by the hordes of other tourists that pass through on their jam packed one to three day tours. Me and my camera mounted on its trusty tripod took a lengthy lunch break at the nearby food stands then continued the tour through the afternoon. Even managed to get some OK sunset shots. 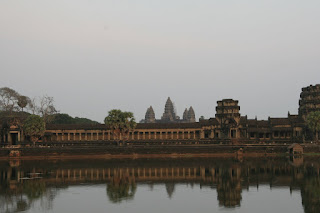 For all the photos of Angkor Wat
Next day I ventured further north to the walled city of Angkor Thom, rebuilt by one of the kings after defeating the Chams who had destroyed the earlier city. It has five gates in the walls, adorned by the face towers that are the signature feature of the main temple in the city, the Bayon. You can't help but be mesmerised by the enigmatic faces, and take oodles of photos to boot! 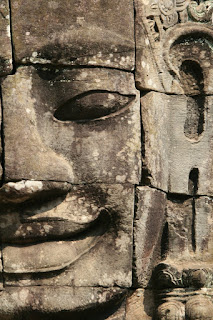 There's also lots of those apsaras, and the Bayon has some excellent bas reliefs, carved in a completely different fashion to those at Angkor Wat. Often more interesting than the battle scenes are the scenes of daily life which flesh out the greater tale being told. 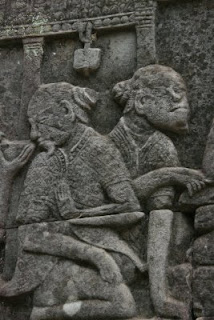 For photos of Angkor Thom including the Bayon faces click here
Angkor Thom can easily take up a day or more, including visiting the temple Baphuon, which has a huge reclining Buddha made of blocks of stone in its western wall. There's a reconstruction project in progress, as the weight of the stones has weakened the walls and collapse is imminent. It's actually a huge jigsaw puzzle, as much of the temple had been disassembled and catalogued in the 1950s and 60s, but with the takeover by the Khmer Rouge the work stopped. In the mayhem that followed, the records of where all the blocks fit together (which were kept in Phnom Penh) was lost or destroyed so imagine the difficulty now involved in putting it all back together again! 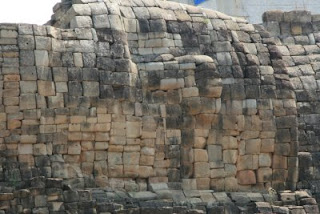 Further north is the old monastery of Preah Khan. Here the restoration work is less advanced, so you get a feel for what the place was like when "discovered", but for real atmosphere the temples of Banteay Kdei and Ta Prohm are the stars. Here the roots of enormous trees have penetrated the masonry, creating more photo opportunities than I've had hot dinners! A bit of patience is required to wait out the hordes of tour groups on their whistle stop visit to this famous temple (it's the one featured in Tomb Raider) then all is quiet again. 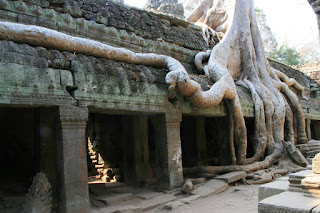 Photos of Preah Khan, and Ta Prohm and others
After four days cycling in the heat and humidity it was time for a day off. And it's time to get another haircut!