Today we headed off from Cilegon, a small town west of Jakarta, to visit the ancient city of Banten. Banten was founded back in the 16th century, and at one point was the centre of the Spice trade in the East, and was as important a city as Amsterdam. Somewhat hard to believe that now...

Roads here in Banten are dreadful potholed affairs, and when the paving is actually decent, they slow the traffic down with interminable numbers of speed humps. Sitting on the back of a motorbike for a few hours isn't too pleasant on the old bum, though moving along does create a cooling breeze, something we appreciate the moment we stop. Needless to say, getting to anywhere takes a lot longer than it would back home, but scooting along through small towns and villages, passed shops and mosques, fields of rice and other crops, and weaving our way through the traffic and potholes, is actually a really fun and interesting way to see the country.

I'm joined today by Bayu, Steve, Dirga and Muhajir. Although Dirga and Bayu know each other from university, the other two are new friends through couchsurfing, so new they only met last night. The nature of friendship in Indonesia is so much broader than our own in Australia, where we tend to take time to adjust to new acquaintances. Here, a complete stranger can turn up with friends and end up staying the night and joining us for a day out. It certainly made for a good time having a bunch of us travelling together, 5 of us on 3 bikes bumping along the roads in convoy....

First stop in Banten Lama is the Chinese temple. It is typically garish and attracts alot of pilgrims amongst the Chinese community in Indonesia. We don't stay long as there is a service going on, and there's only so many bright coloured ceramics one can handle on a hot day!

Across the canal is Speelwijk Fort, built by the Dutch to guard against marauding intruders. It's all ruins these days, and even the sea has receded, but we did do a little explore through some tunnels and chambers that remain intact. 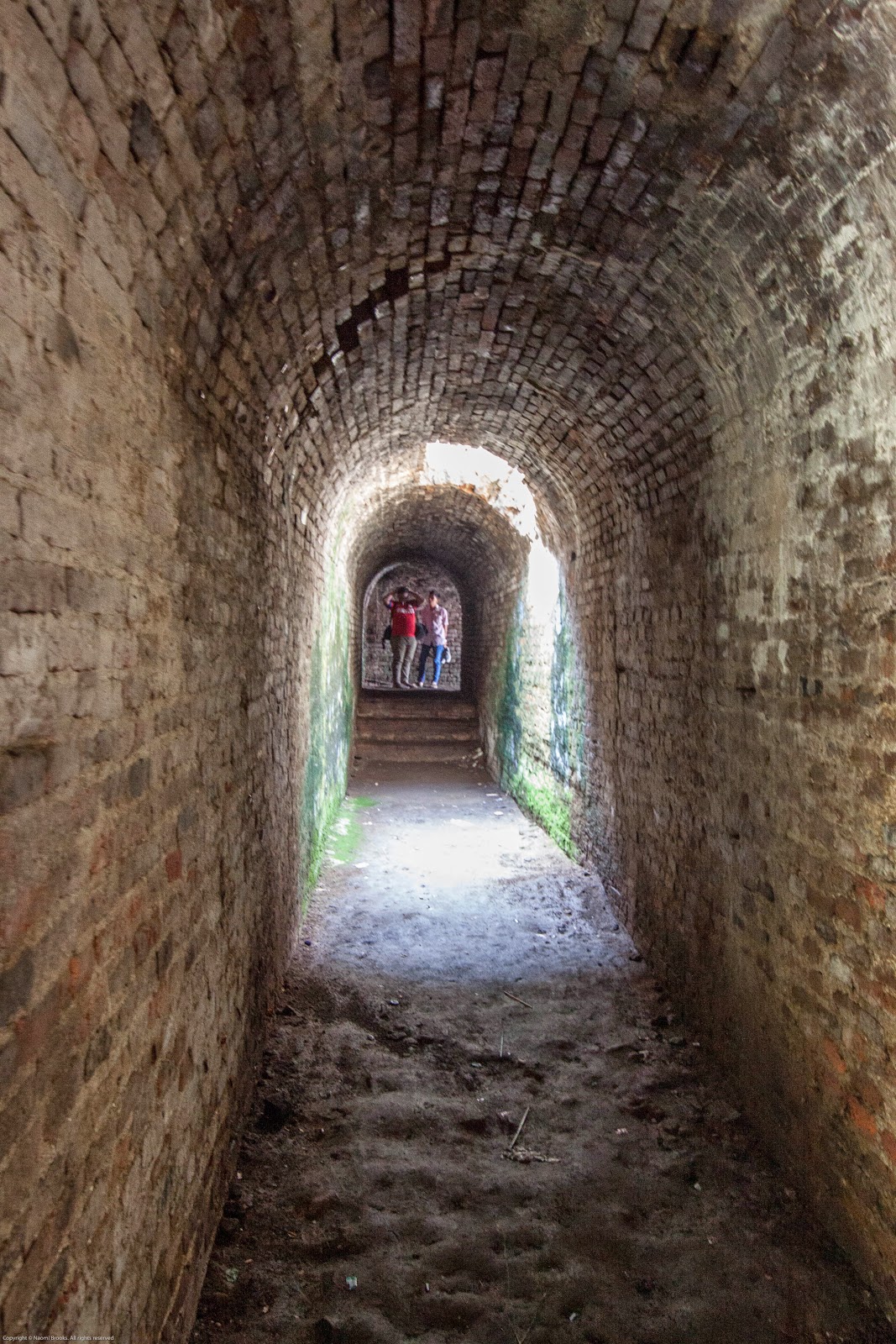 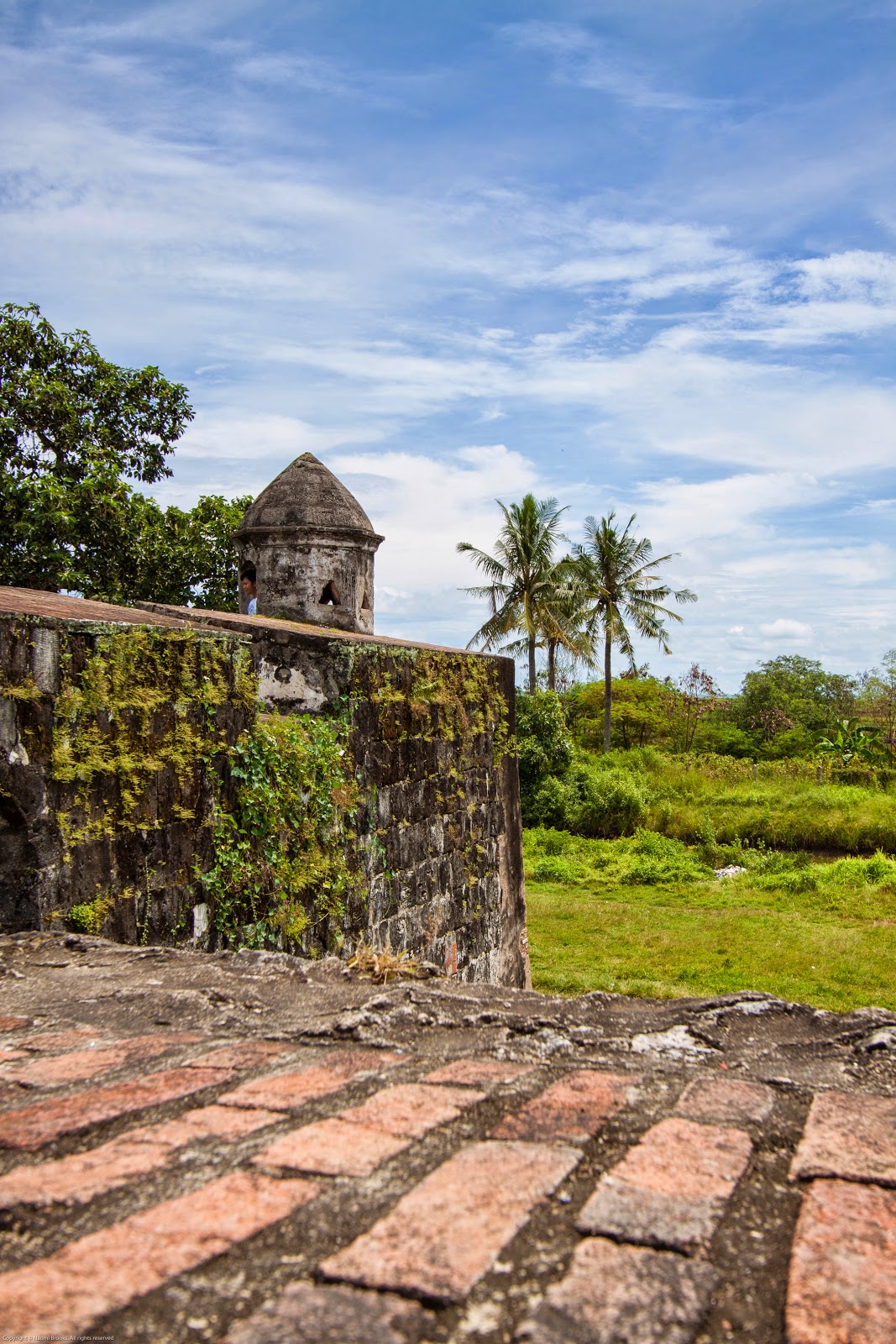 Next we visit the Banten Lama museum, entrance fee 1000Rp, which is a small but quite modern display, though nothing in English. The pictures, maps and drawings do a fairly good job though, and my hosts help out with a little translating as well. Steve, a teacher at an International Learning Centre, studied archeology at university, so he's a pretty good asset to have, even if he's scared of cockroaches!! 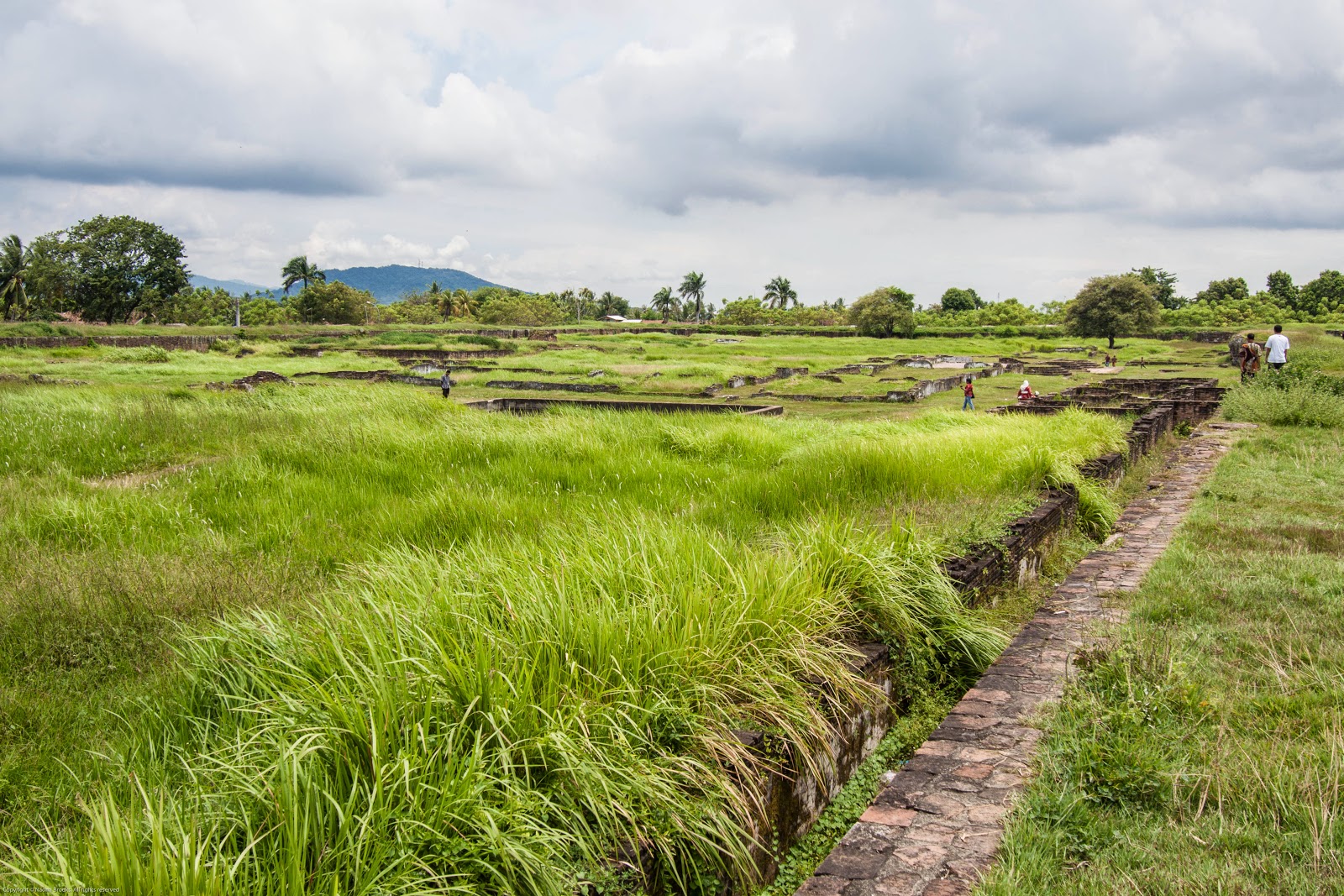 After the museum we climb up the wall to get into the old palace grounds, because the entrance gates are locked. Not sure why they are locked, but everyone just accesses the site by climbing up the crumbling walls anyway. There's not much left of this quite huge property, which was abandoned in the 18th Century, just a few structures and foundations. 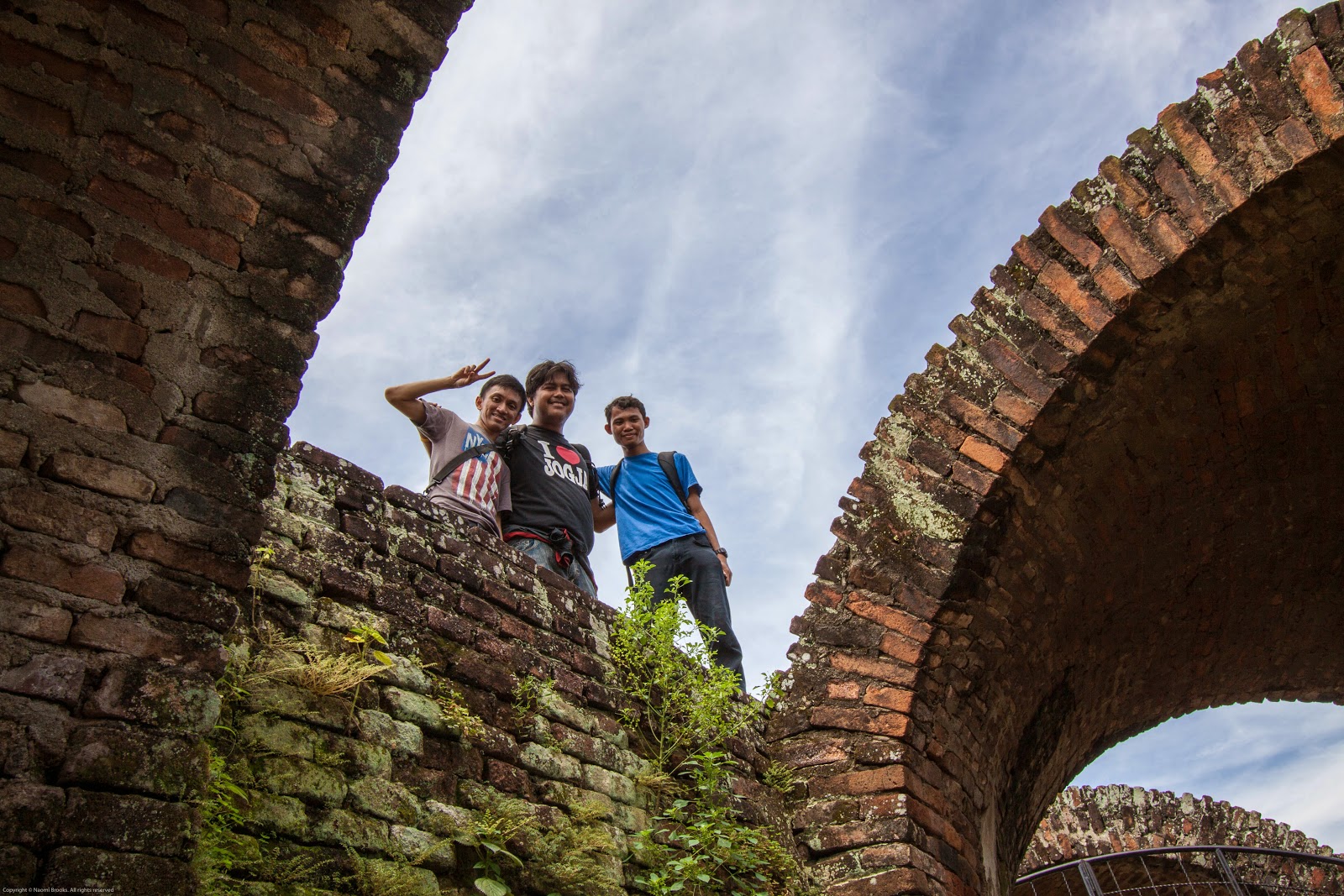 Next is the old mosque, which is a popular attraction, evidenced by the miles of tortuous markets we have to weave through to get to it, and the almost festival like atmosphere at the mosque itself. It's interesting to see worship and commercialism so intricately linked, something my western sensibilities don't quite marry with Islam, but there you go, another preconceived idea thrown out the window!! 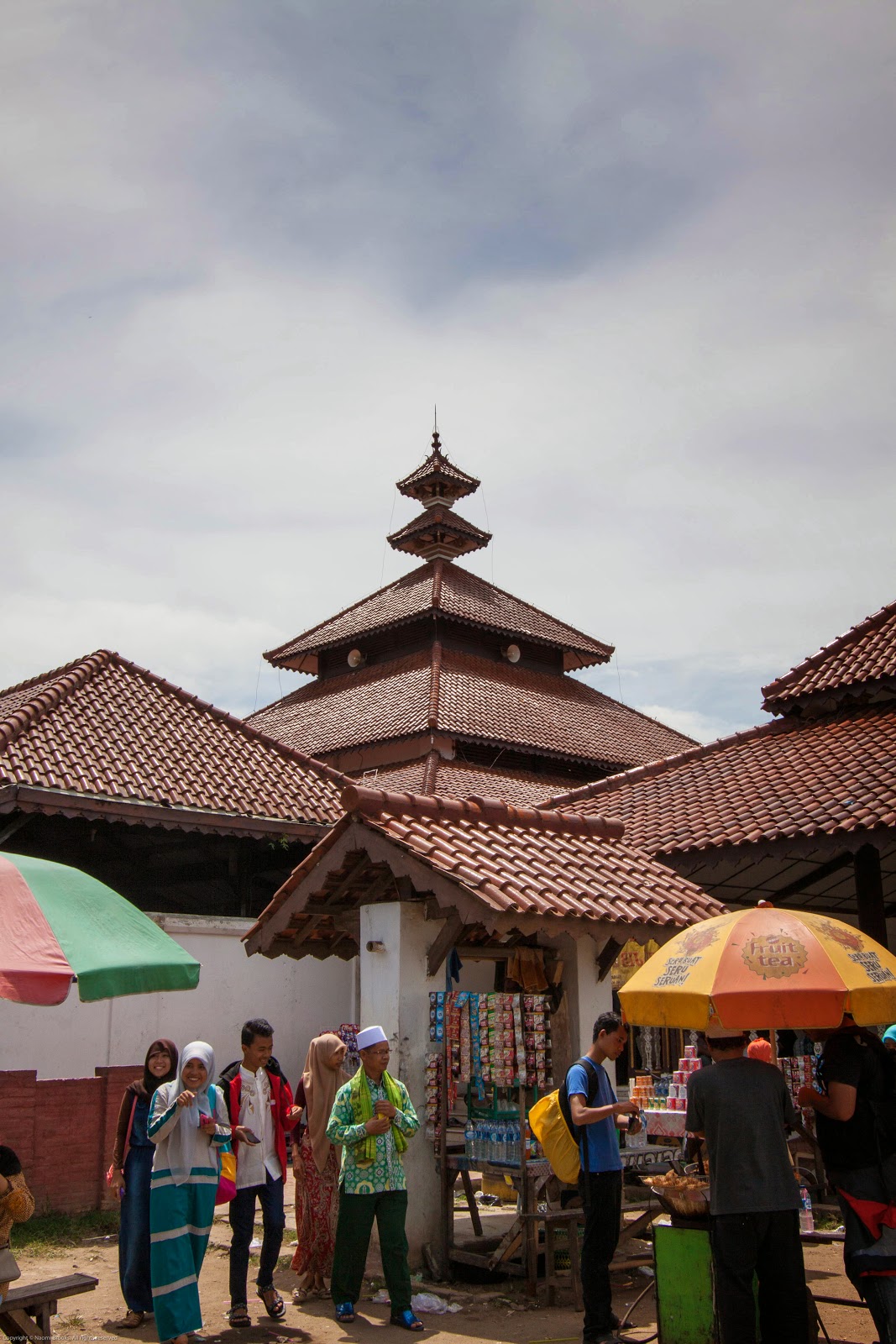 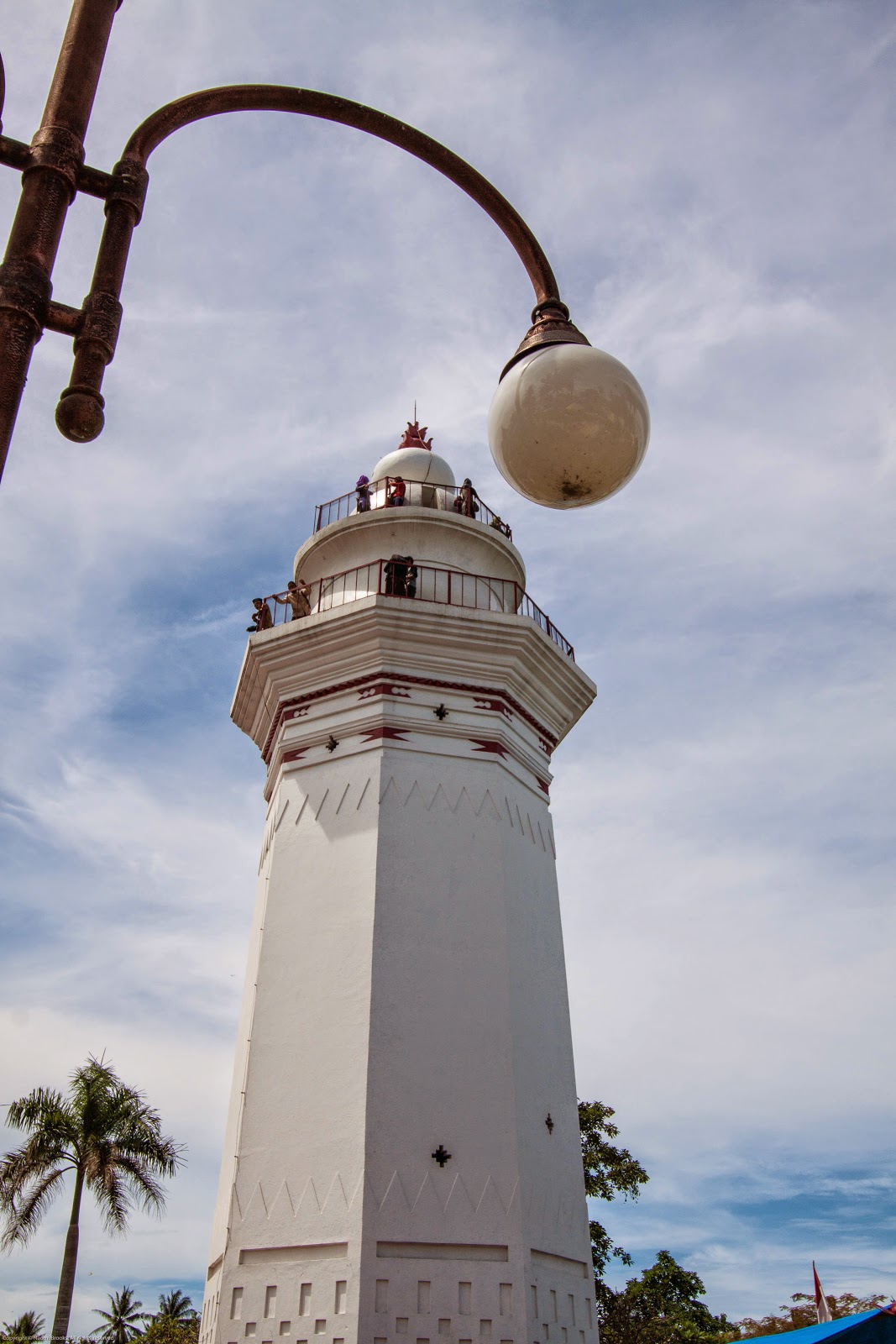 Just next to the mosque is part of the old grand canal, complete with drawbridge and lock to let the boats through. 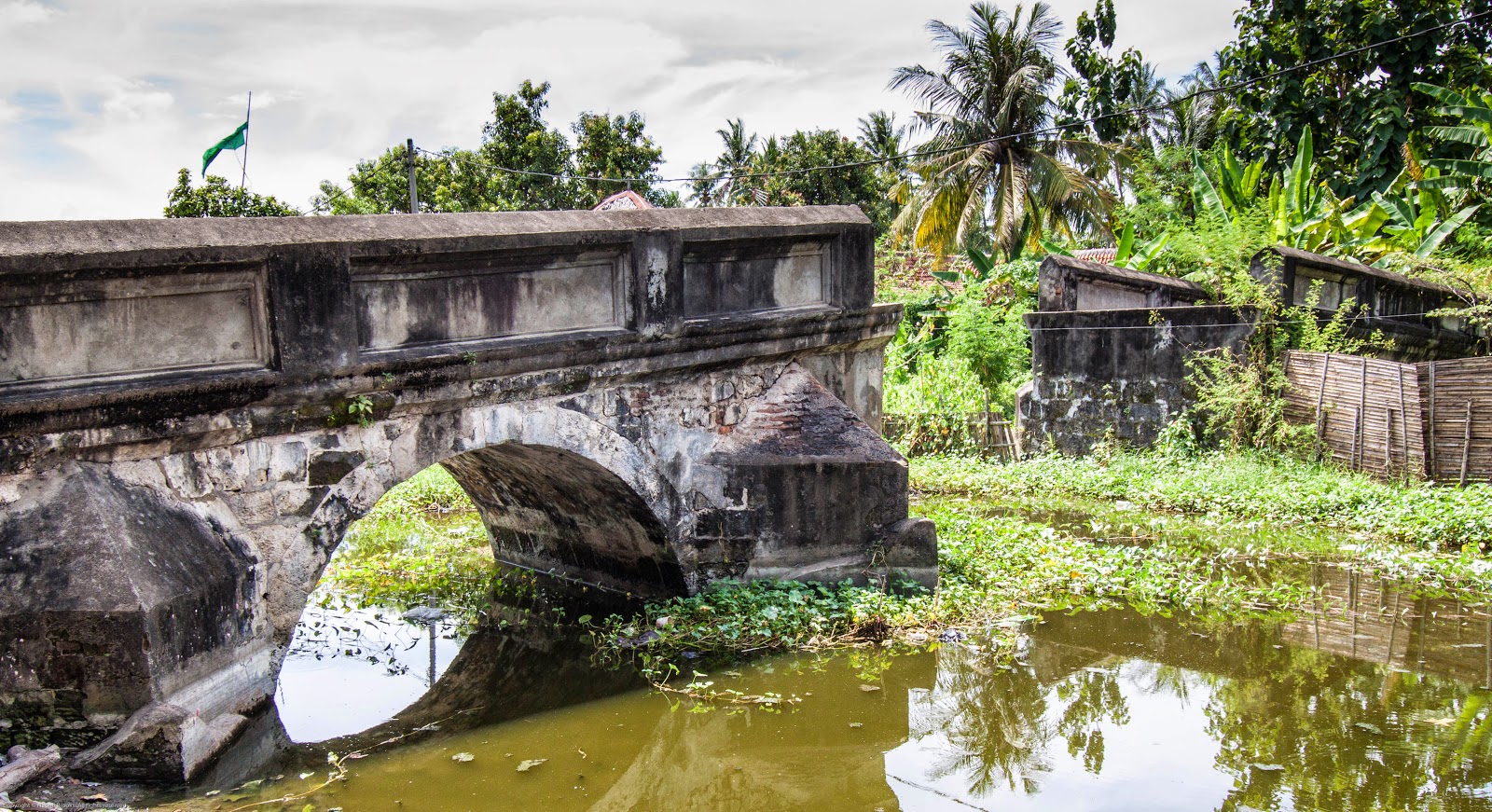 Finally, we visit the last sultan's palace to be burnt down and abandoned in the 19th century. After that, the place just reverted back to small farmholdings with not a lot to show for it's past as a city of note. Apparently the area has been listed for World Heritage, but meantime it is disintegrating with time weather and neglect. 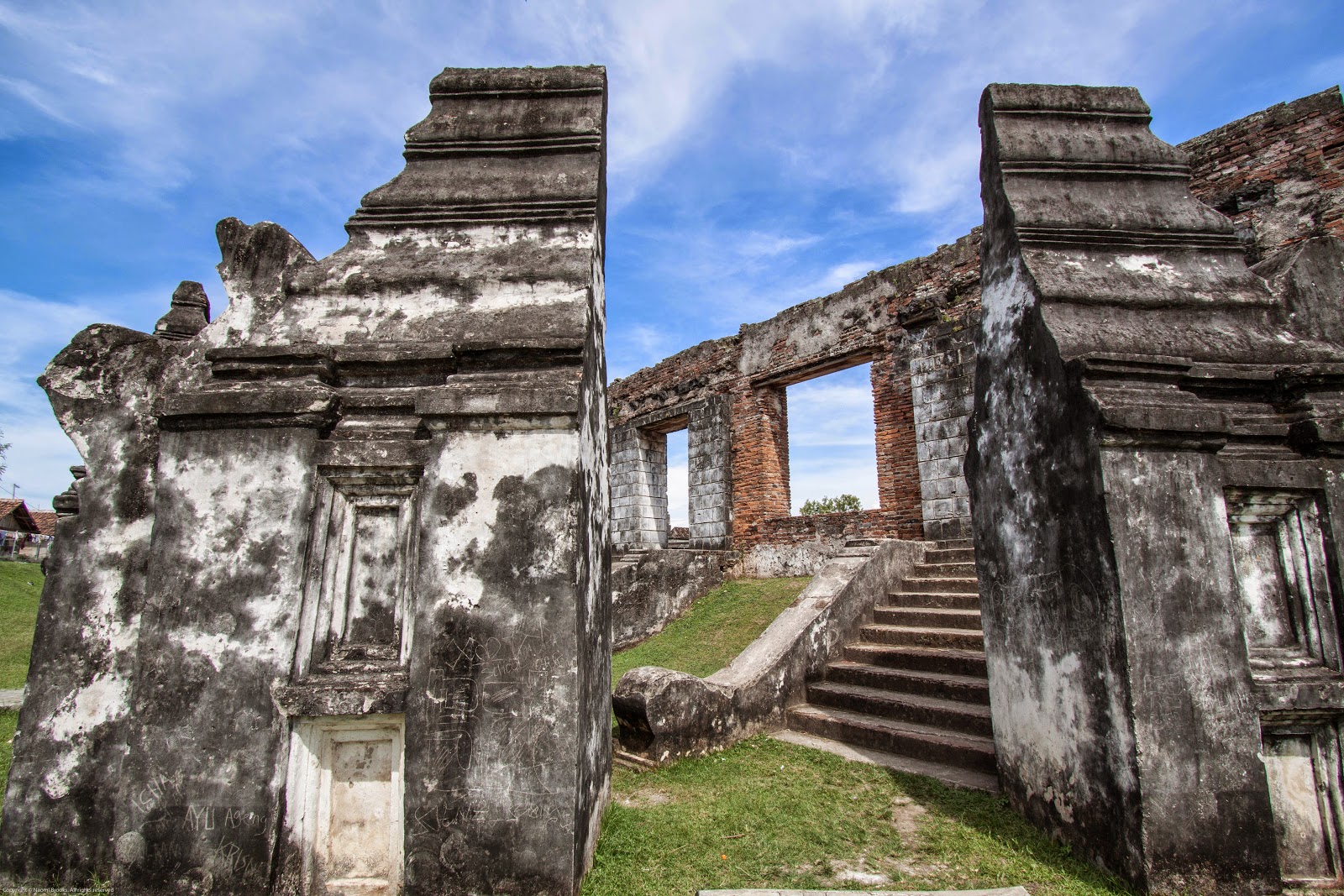 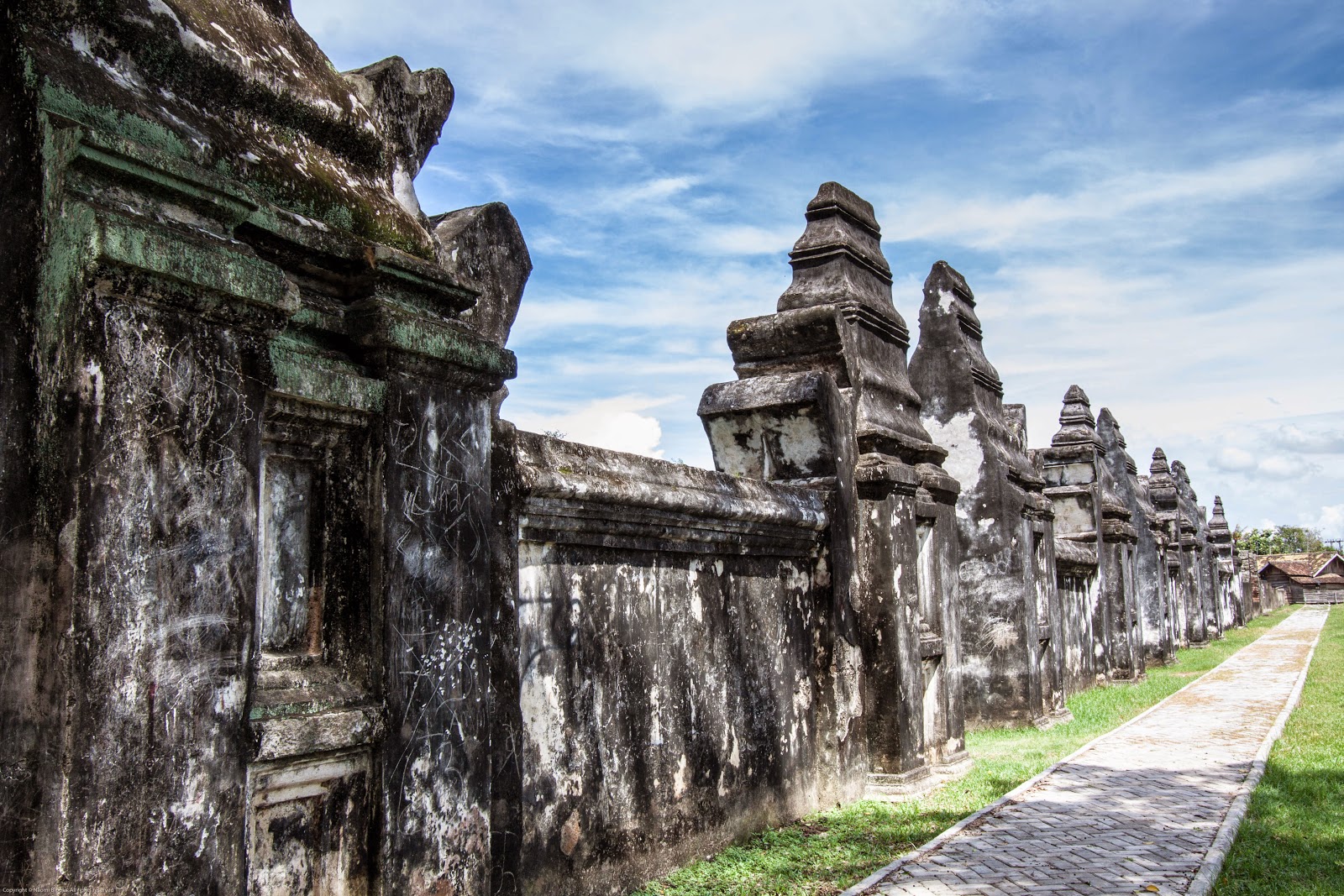 By now it was 2 o'clock and we were all feeling pretty exhausted with the heat and humidity and antics involved in taking multiple selfies on ancient crumblies. We went to a fish farm restaurant and shared a meal of the local milkfish, called bandang, with tempeh, tofu, veges and rice. A complimentary glass of tea would have been so much more refreshing if it had been beer, but this is Islamic Indonesia, and you have to work a little harder for your beer. 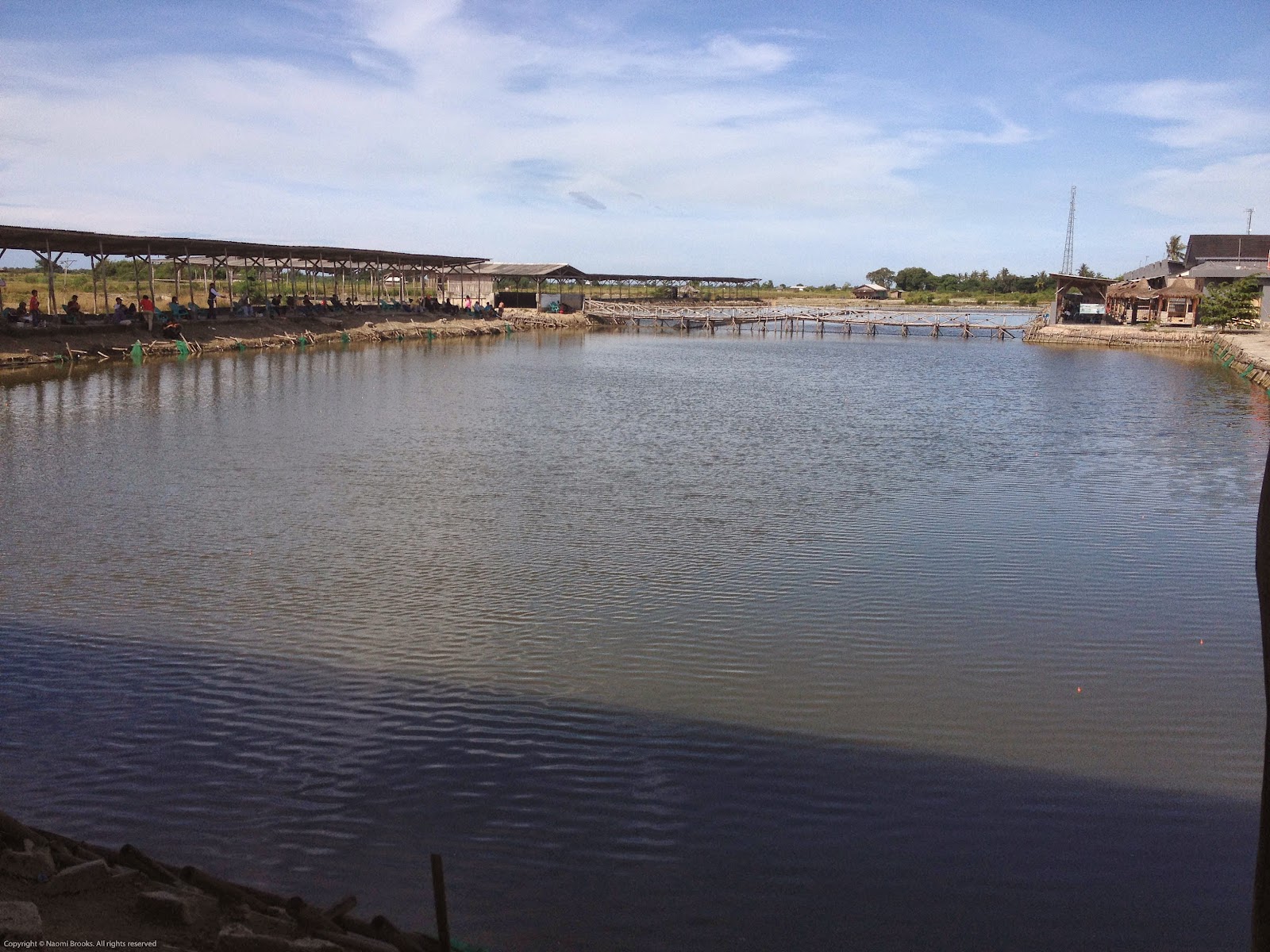 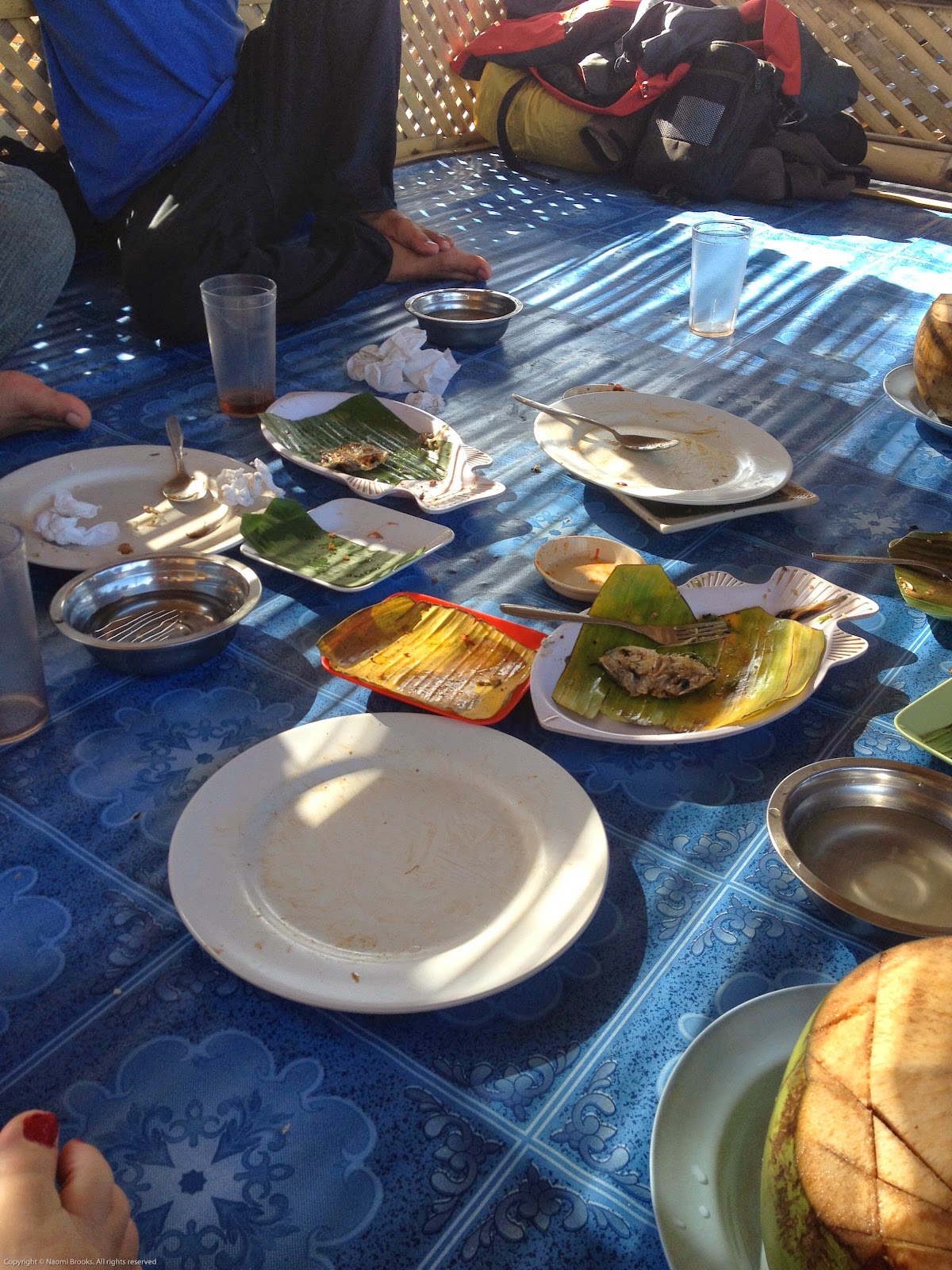 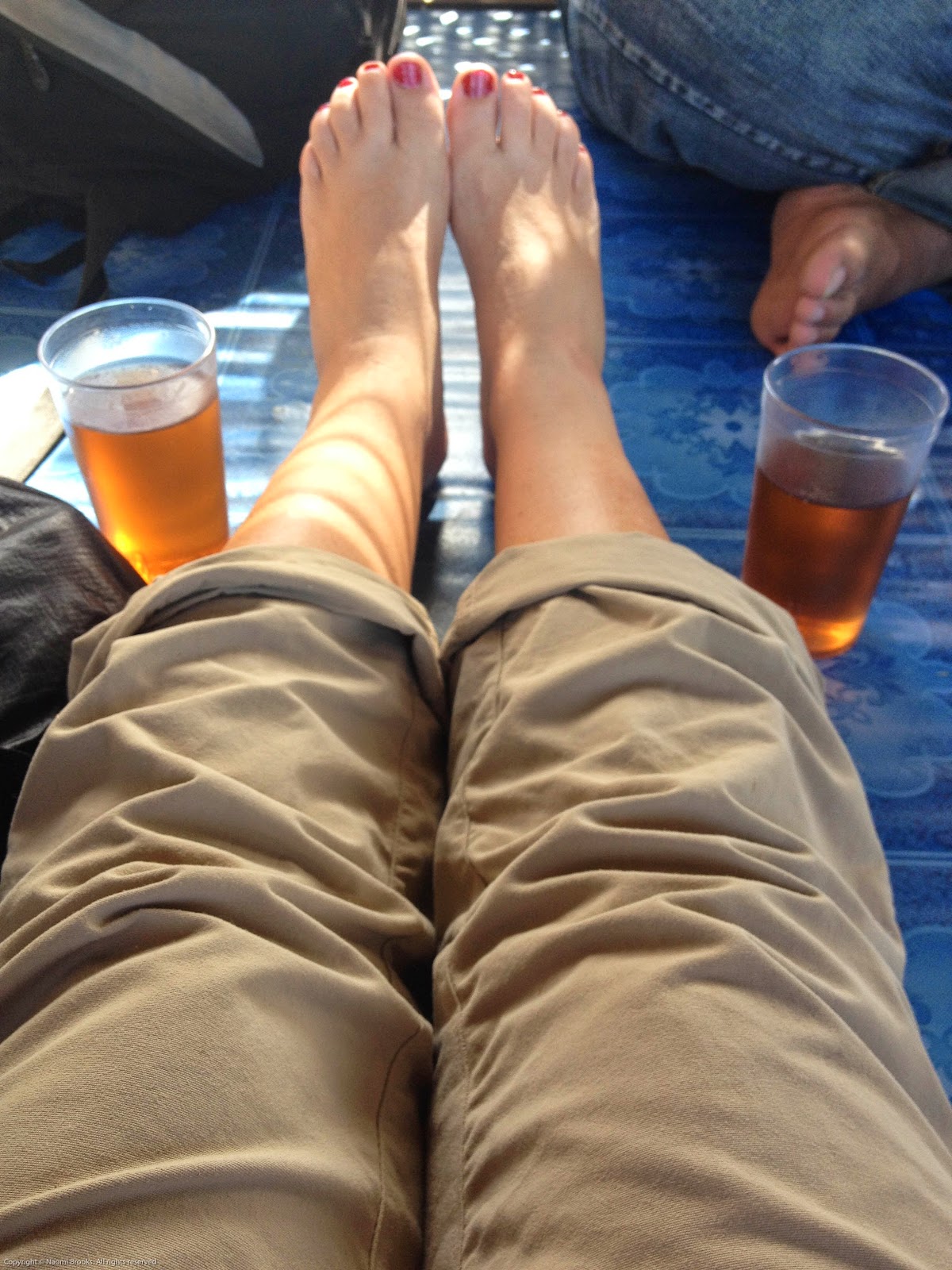 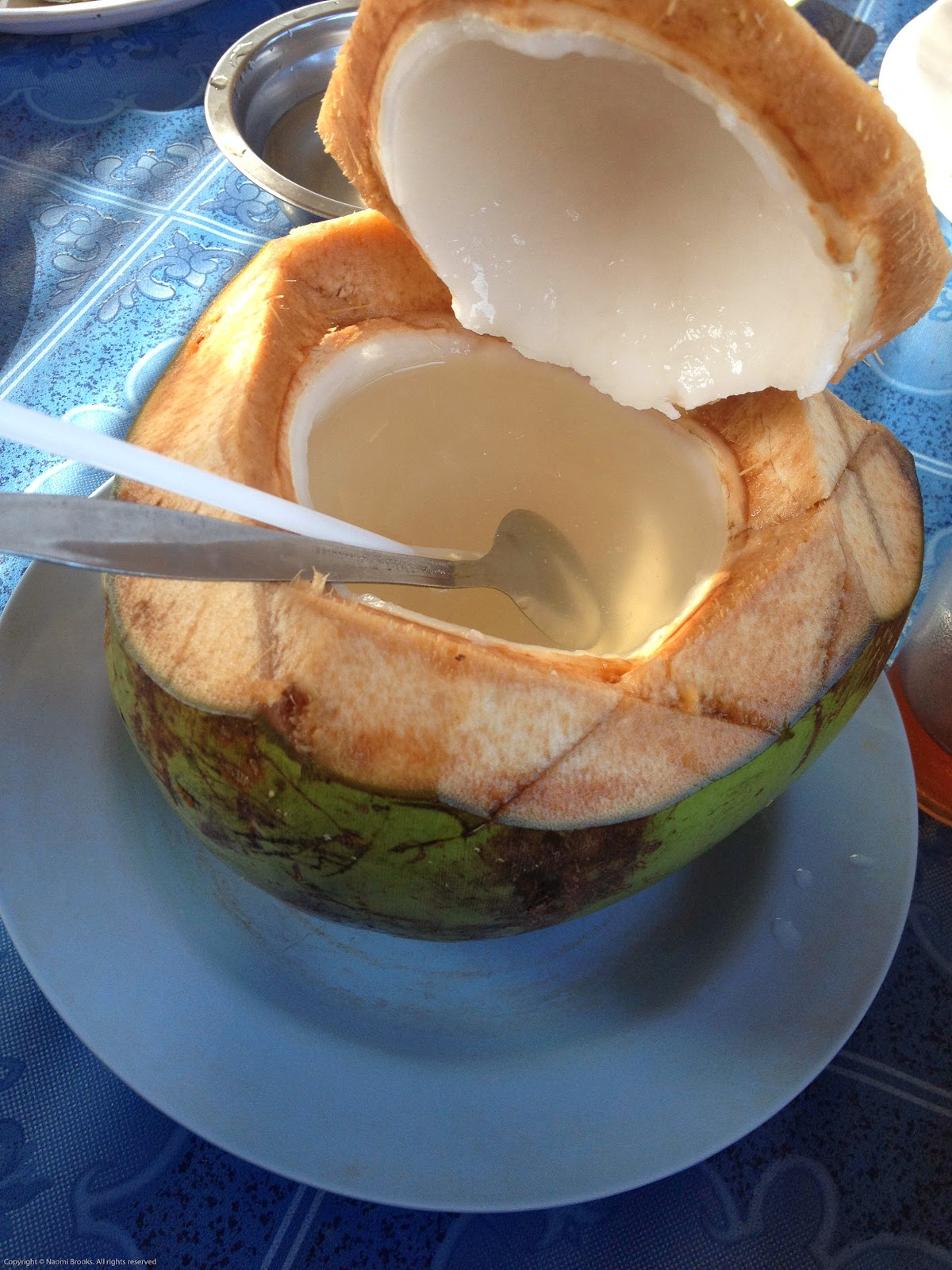 I am sorry to say that we had polished off our meal before I thought to take a photo, but I did take a picture of the coconut drink, which was pretty refreshing indeed. 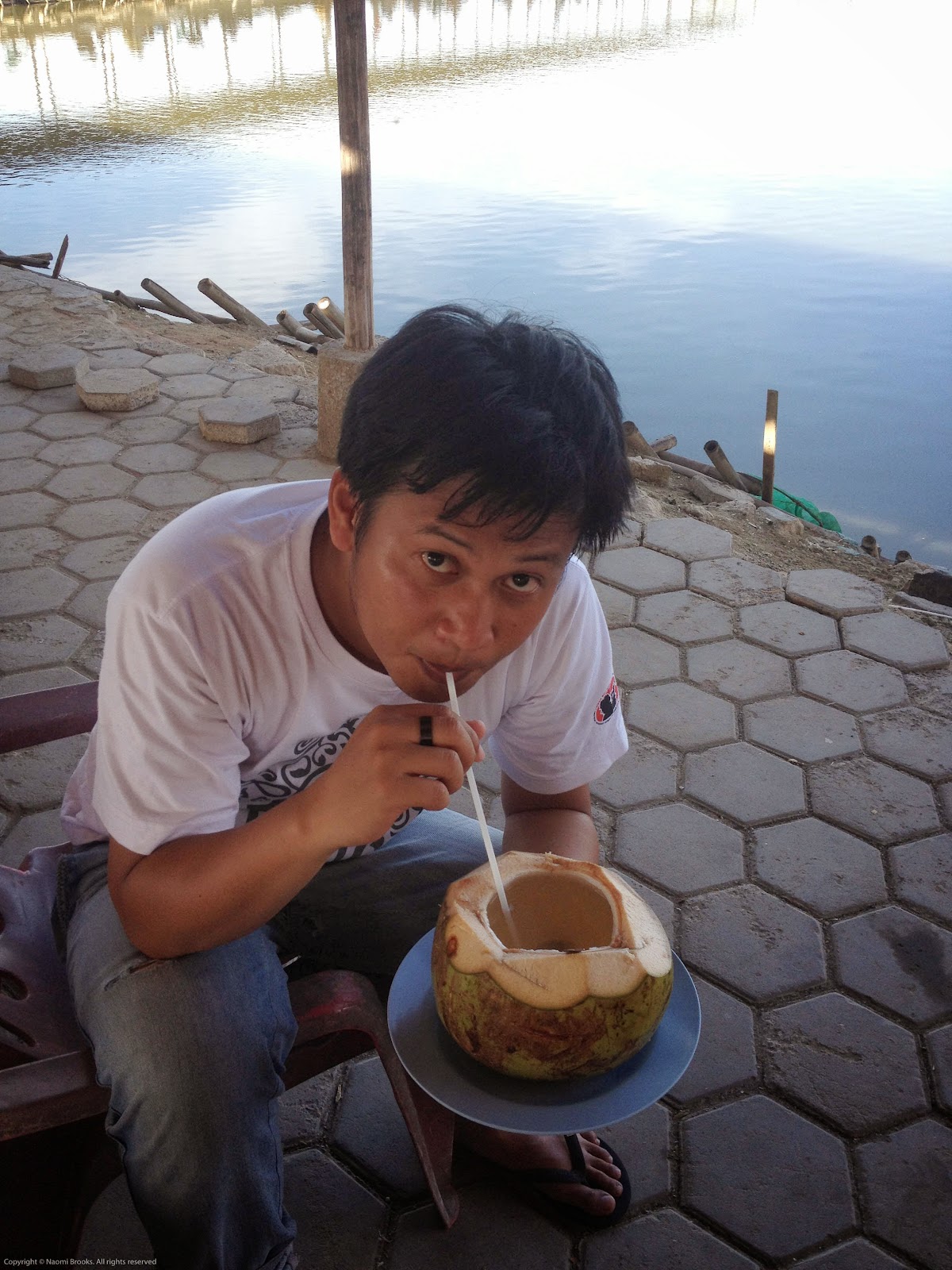 After our late lunch we headed out to Pulau Dua, also known as Pulau Burung because it is a wildlife reserve for migrating seabirds. We had to navigate along the top of fish farm barrages, a piece of cake on foot but required a little skill on a bike. It's mostly a remnant of mangrove forest along the seashore, with a viewing platform providing a reasonable view, but no birds were sighted. We did see some crabs and lots of mudskimmers - funny creatures they are. 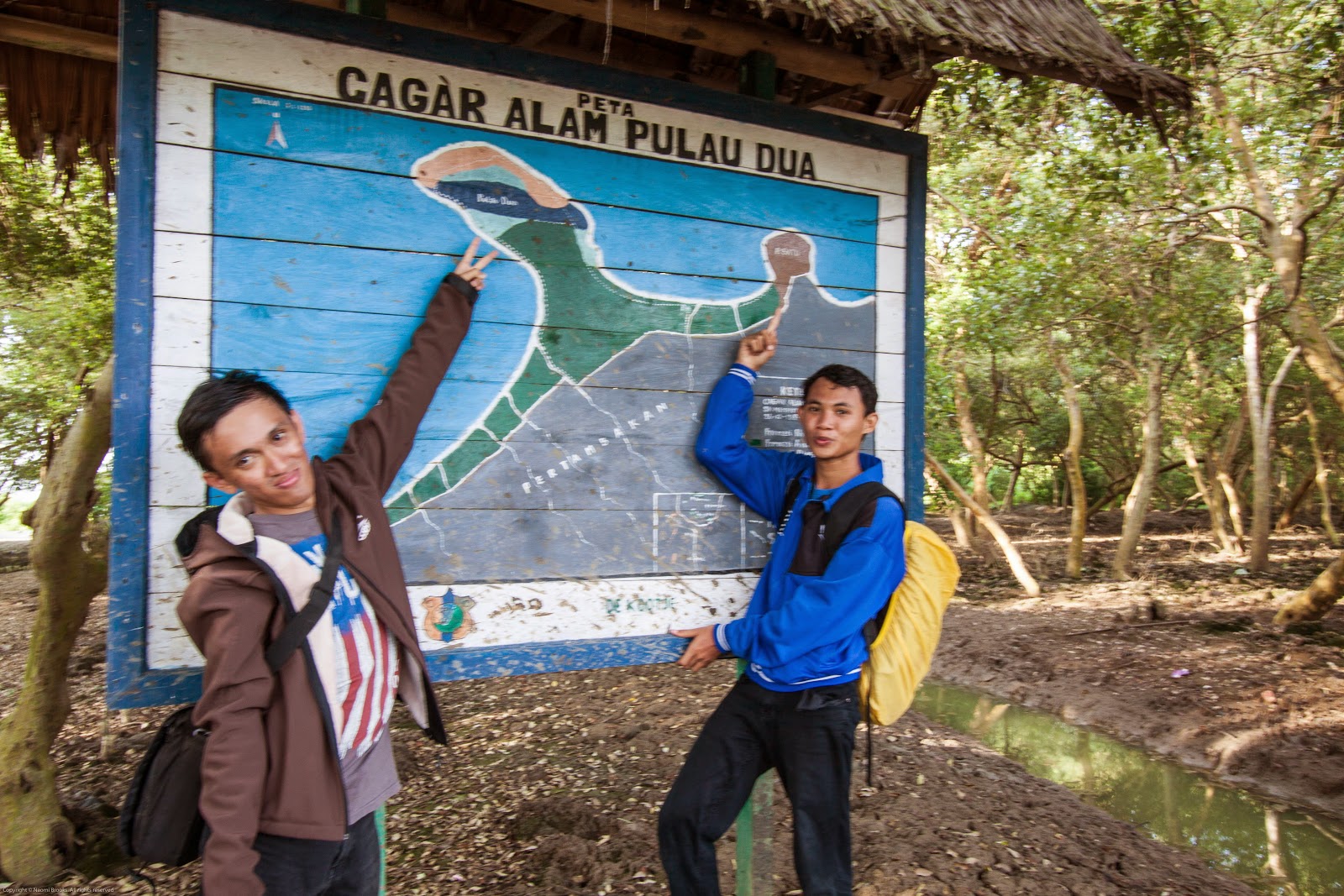 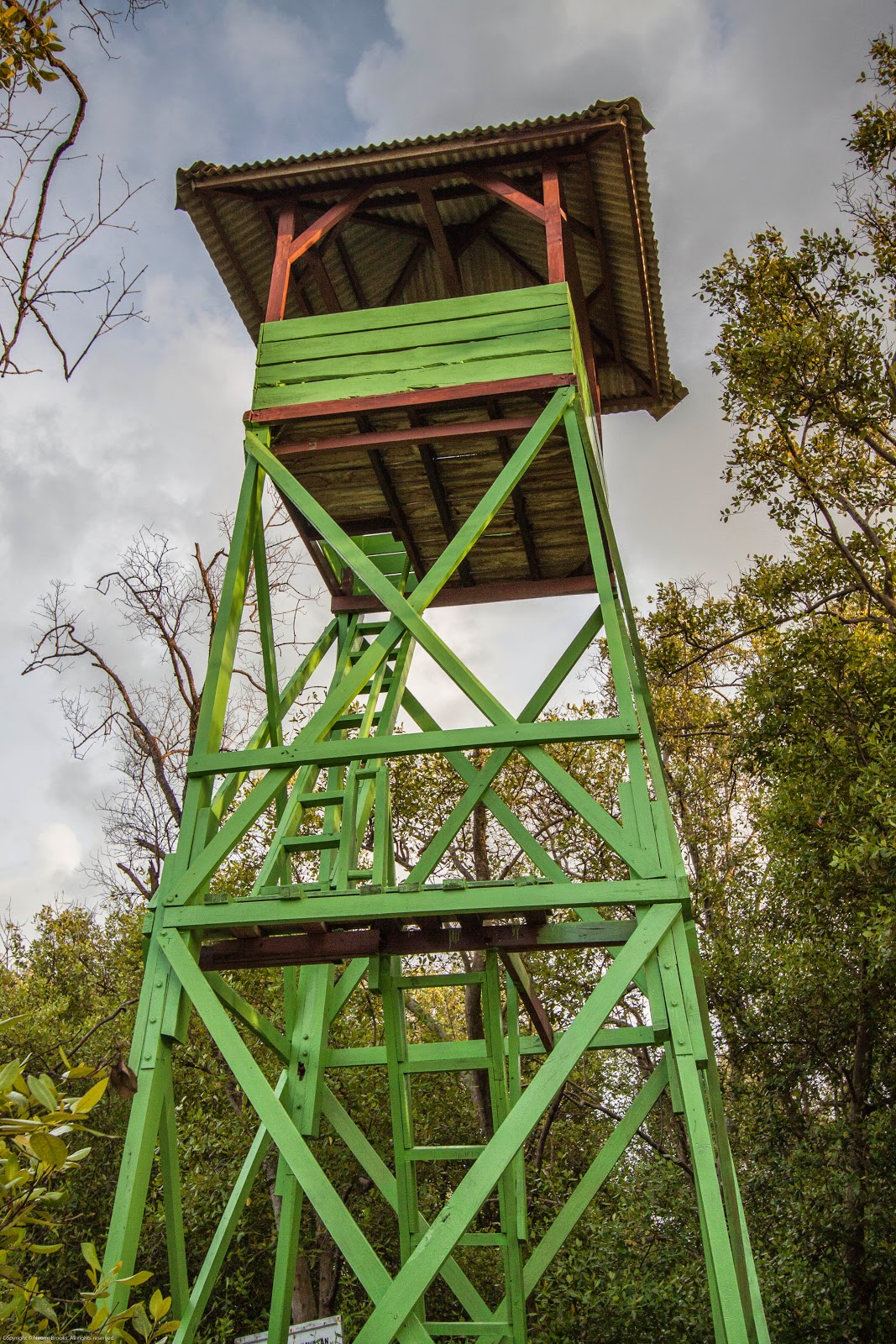 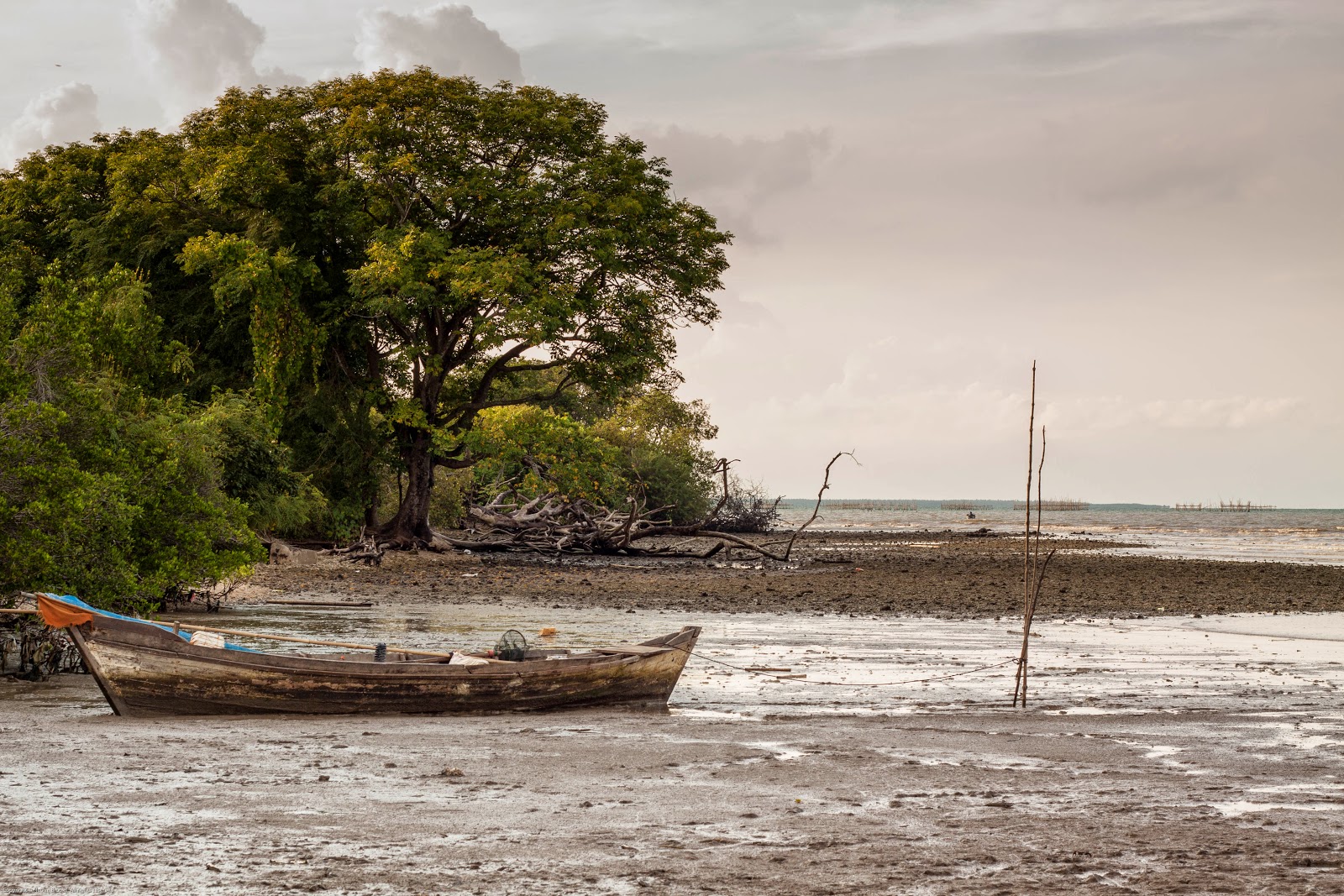 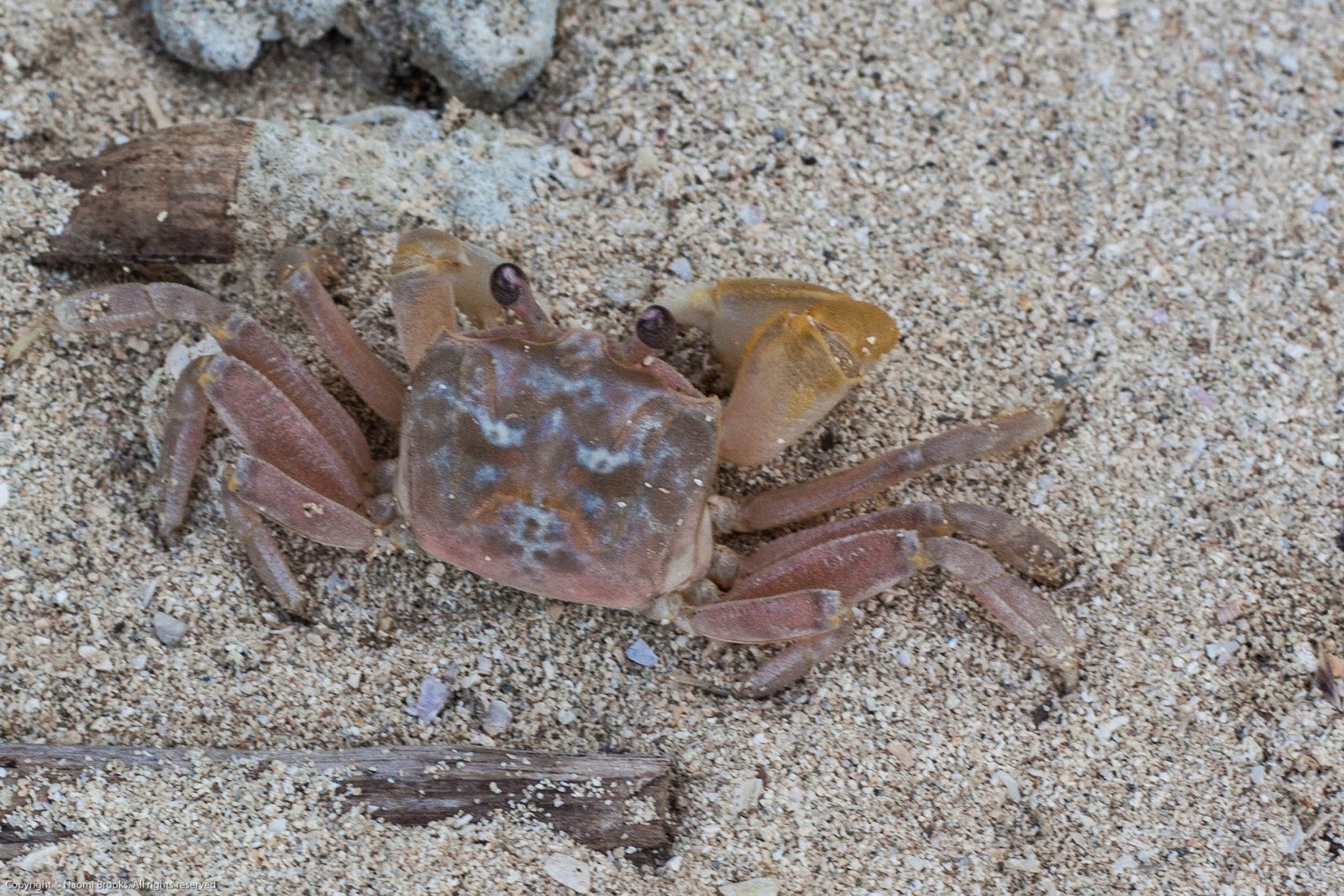 Back on the road again I realised I'd left my backpack with my tripod and filters in it back at the reserve, so Bayu and I had to backtrack over the fishfarm trails again to retrieve it. Phew!! The rest of the gang waited for us at a little shop where we rested for refreshments and a couple of the guys visited the mosque. Then back on the road again, by now getting dark, making our way in to Serang. Somewhere along the way I'd said I liked Durian, so we stopped at a Durian shop for Sop Durian. This is flesh of durian mixed with ice and some coconut water and maybe some milk, not sure exactly, but extremely yummy and refreshing if you can stand the taste of Durian. Otherwise it probably tastes like eating rotten flesh!

By this time all of us are beyond exhausted. Steve has to get a bus back to Jakarta, and we have to ride back to Cilegon, about 17km away. And then it starts raining, absolutely pouring. We remain holed up in the Durian shop until the rain begins to clear - Steve already having bailed for the bus stop on the back of Muhajir's bike. We head off but the rain returns so we wait again under a shelter till it eases and then we get on the bikes and just go for it. Bayu just wants to get home, as do I. Once Dirga knows his way he's off too, a quick wave as he speeds off on his much larger and faster bike. We are all beyond the point of care, and my poor little backside gets mashed over some of those bumps, but I'd rather be out of the weather and having a cool bath than spending any more time on the road. 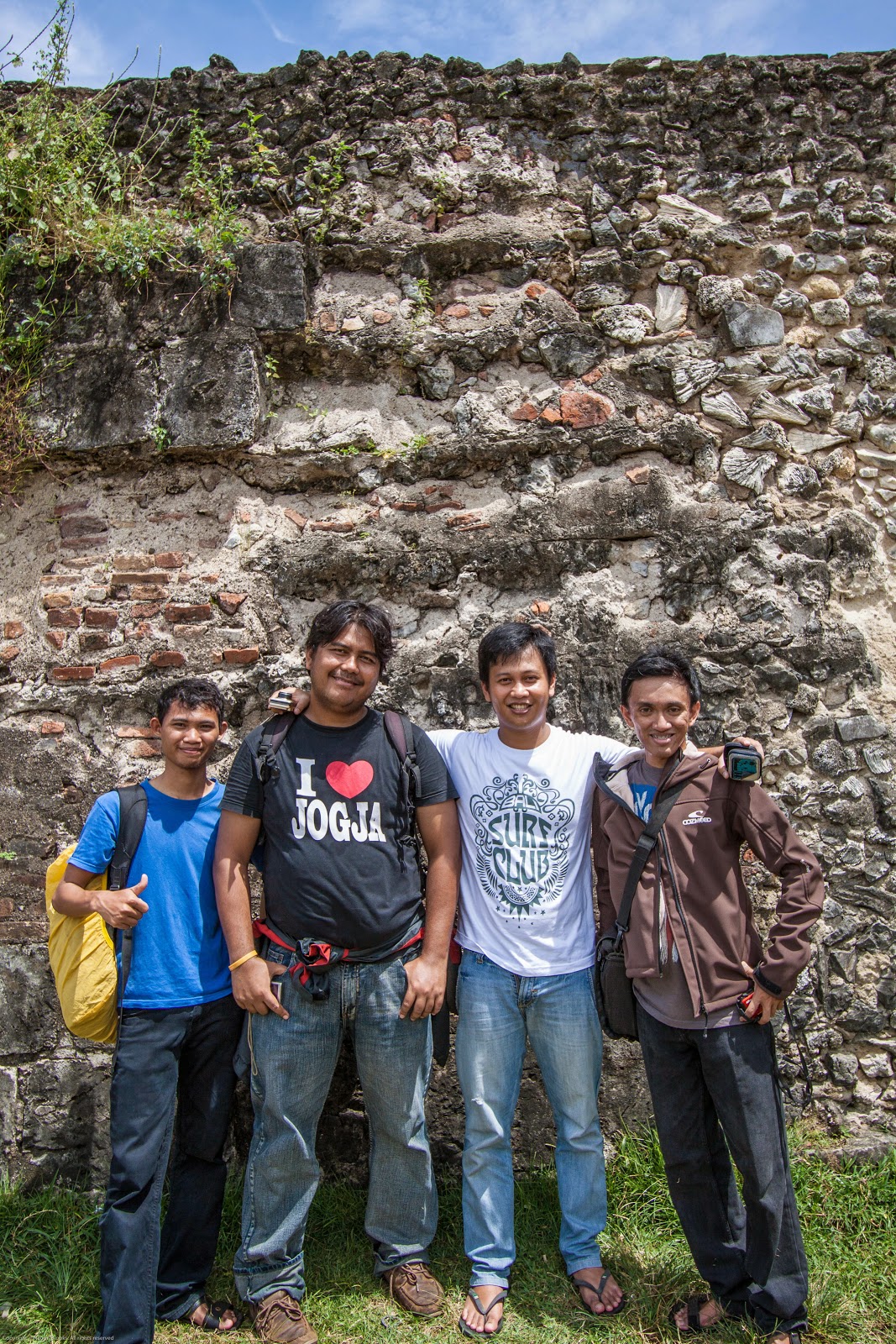 It was a magnificent day with a fine set of friends. Bayu is off to work tomorrow and I'm sleeping in...

The rest of the photos are here