Time to go see a volcano, or, a little camping in the woods

It started with the hotel tout the moment I got off the angkot, whom I ignored. I wandered around looking at unimpressive room after unimpressive room, with asking prices over $20 a night. I really just wanted a cheap room, not a TV and a pool to swim in. Seriously, swimming pools, even warm ones, are just not my thing.

I found a cheap room, but the price would be going up on the weekend, so I just paid for one night. The room itself was pretty dirty and the only reason I didn't leave was because I met a North American couple staying there who said they'd looked elsewhere and hadn't been able to find anything cheaper. And I was tired. So I had a warm wash and headed out for dinner. Sate Goat that was undercooked, tasteless, and expensive. Strike two...

It was Friday night and the place was heaving. People were letting off firecrackers in the street and it was plain noisy. No quiet little spa resort, but noisy tourist trap. Really not my sort of place.

Next morning I got up early and wandered around looking for other housing options. The Americans were right, even places without pools were asking 300,000Rp and more. I wandered around, finding some back streets through the kampungs, and started to think the place wasn't so bad after all. And anyway, I had my period, so always a good idea to not do anything adventurous on my heavy days. Hahahahahaha!!!

I ask at the hotel if I can stay another night, to discover that the hotel is now fully booked for the weekend and I have to leave. They tell me that I can get a room for 200,000Rp (same as what I would have paid at the hotel I'm being kicked out of) at a hotel next door, but the person I need to speak to is still sleeping and I need to come back later. That seals the deal, I don't like the place, time to leave.

I take an angkot into Garut and sit at the terminal drinking an avocado juice - seriously folks why isn't this a drink in Australia it's freaking delicious - and decide my next move. I have camping gear, stove, fuel, even food though I could do with a little more, why don't I go camping?? I jump on a bus to Cisurupan (15,000Rp) and am immediately attacked by the ojek mafia when I arrive. I take refuge in a nearby Alphamart and stock up on noodles, biscuits and water. When I walk outside to repack my supplies into my backpack I meet a couple of young fellows also going camping, who ask if I want to join them. Some sort of negotiation with the ojek mafia goes on, I think along the line of "if the bule pays this much we'll give you boys a cheaper price" (it's pretty easy to read shady body language), but I wasn't going to make a big deal. I ended up paying 40,000Rp, the boys say they did too but a bit of my money seemed to get passed on to the other two drivers, and a couple of Jakarta lads we met say they paid 30,000Rp, which is probably the correct price. But one has to keep these things in perspective. 10,000Rp is one dollar peeps!!

So, the mountain I am off to camp on is Gunung Papandayan. This is a very active volcano, with steaming geysers, bubbling streams of hot water, hot vents spewing sulphur, quite spectacular actually. I check in at the post, fill in the book and the paperwork and pay the foreigners entry fee of 15,000Rp per day, then go find the boys. We got left behind on the way up the hill when my ojek's bike overheated and the engine cut out. A bit of water thrown on the carby cools it down and we are away. 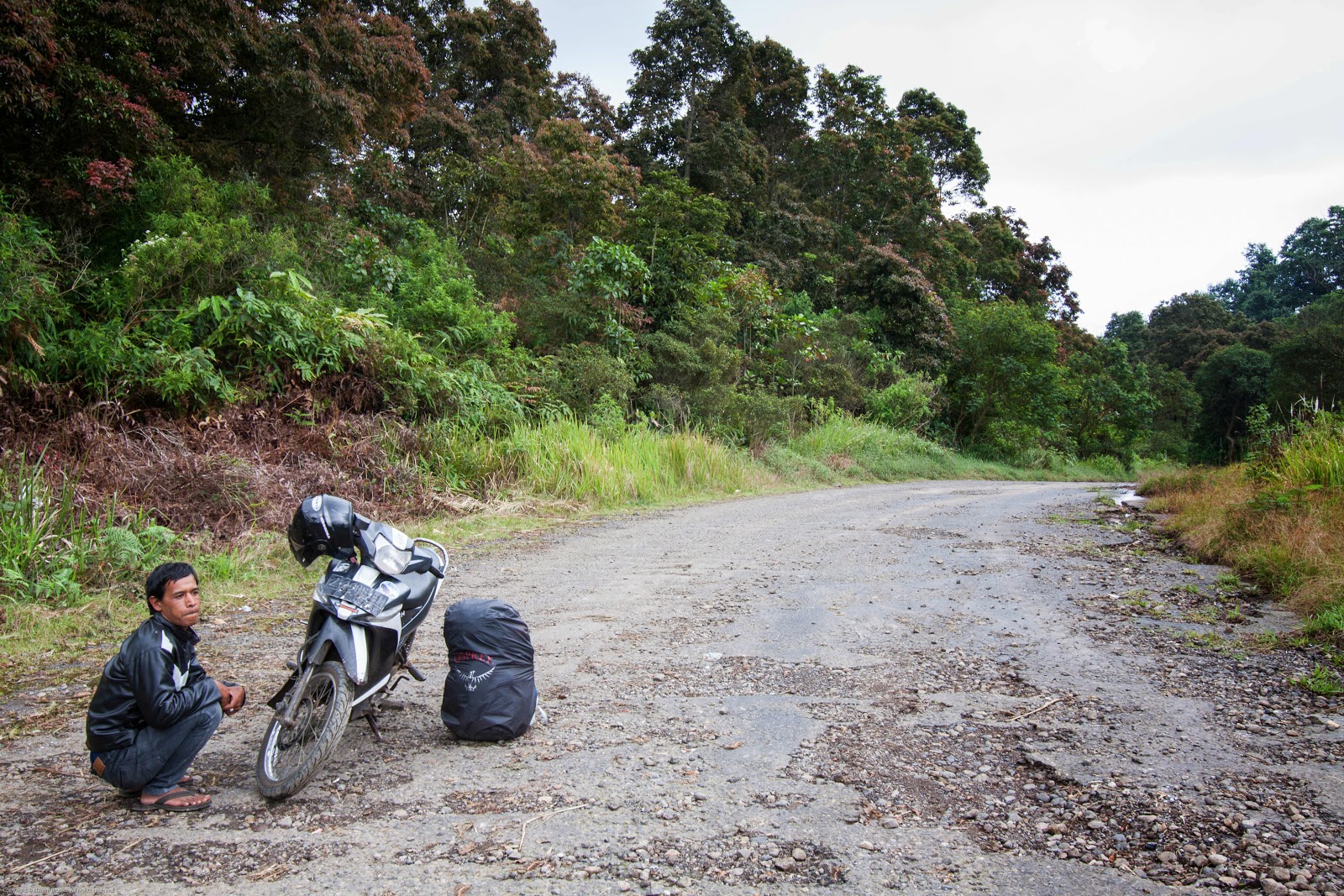 Soon we are heading up into the volcano crater and I remember something rather important. It's the first day of my period, something I often euphemistically call "stuck pig day", and I haven't been to a toilet for a few hours. And there are no more toilets to be found till my return down the mountain tomorrow. Let's just say I'm feeling a little uncomfortable... 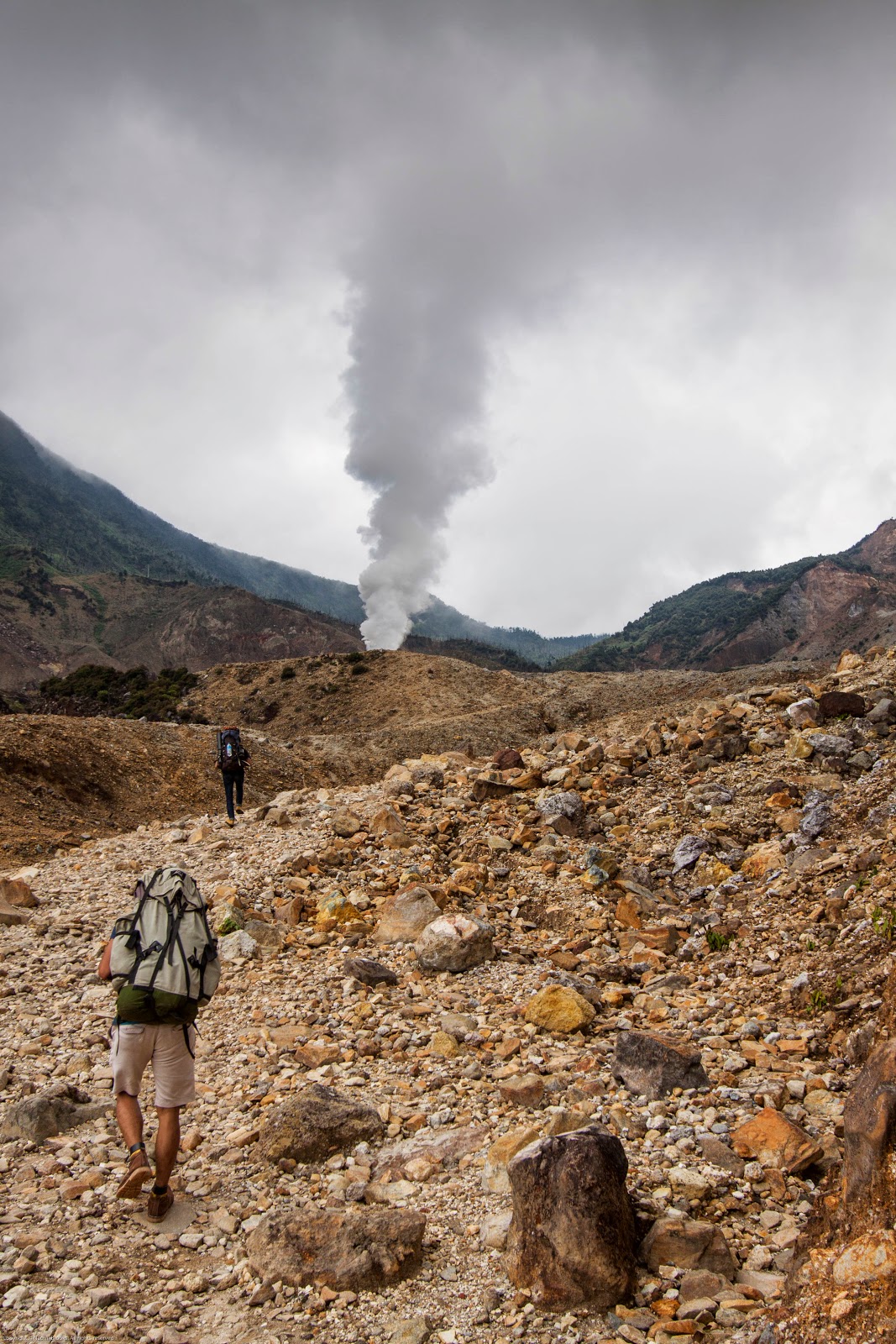 Then I recall a comment made by Robyn Davidson in her book "Tracks", about her trip across Australia with camels, where she describes just letting that sort of stuff go. OK she was in the middle of nowhere and I'm on a track with a whole bunch of other trekkers, but it's really the attitude that counts. I have no idea how much of a mess I am in, but I decide to cease caring. Eventually we find a stream and I leave the boys to rest whilst I undress, wash my heavily soiled clothes and readjust, so to speak. Nobody comments on my strategically soaking wet pants when I rejoin my companions, we simply keep trekking. And I am saved for now. 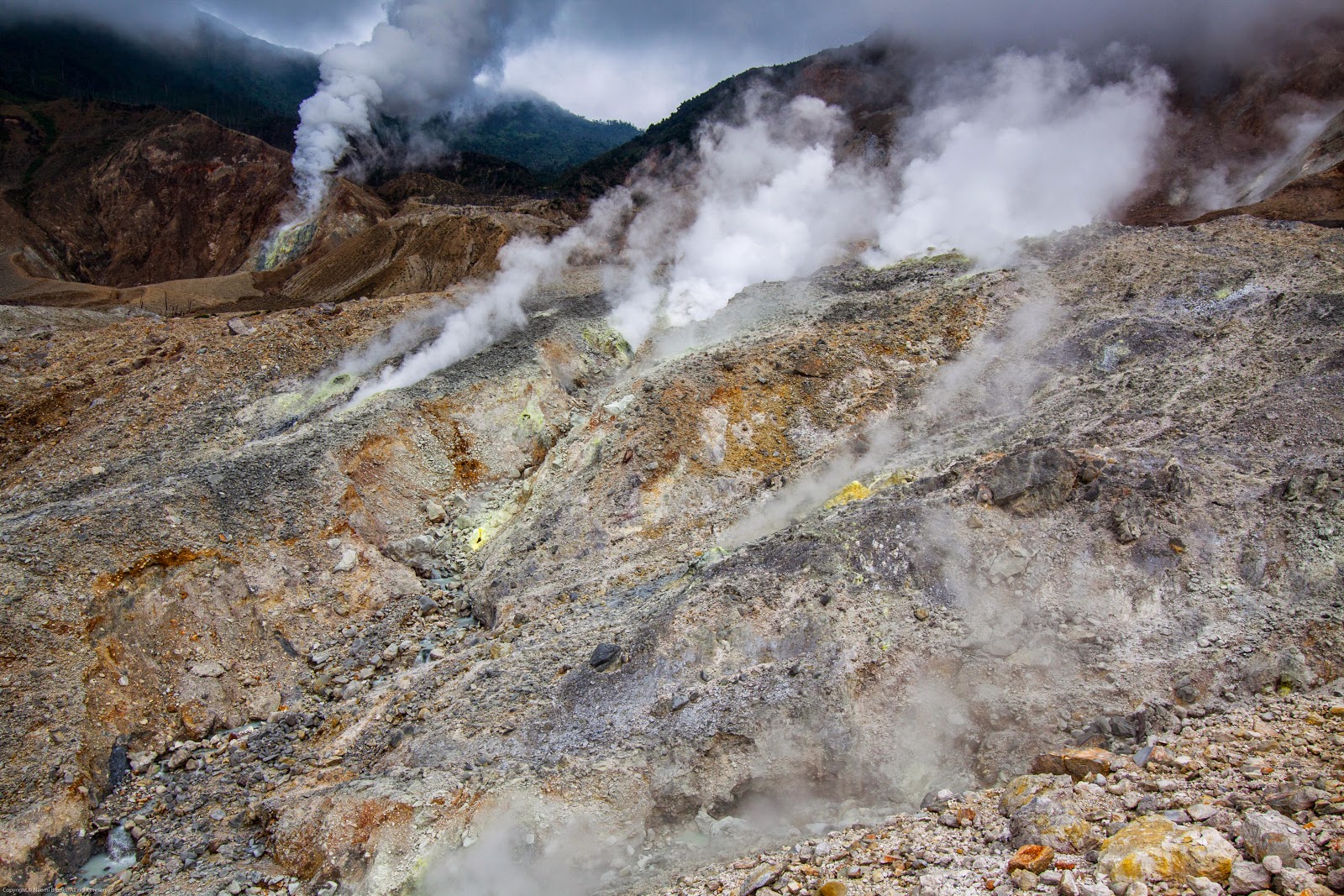 We pass through a gap in the mountain and arrive at the first camping site. No-one actually camps here, but you pull out your paperwork to fill your details into another book and pay some money, I think they are camping fees. I pay 5000Rp, the same as the boys. We then track around the mountain even higher up, overlooking the volcano below. The clouds are settling in by now, so we move smartly through to the camping site, which is already heavily occupied with large groups of people. There are tents everywhere, and many people have quite a lot of gear with them. There's musical instruments too, so all evening and into the night we can hear various groups singing. At one point I think I even heard Hotel California! Adele's also very popular..... 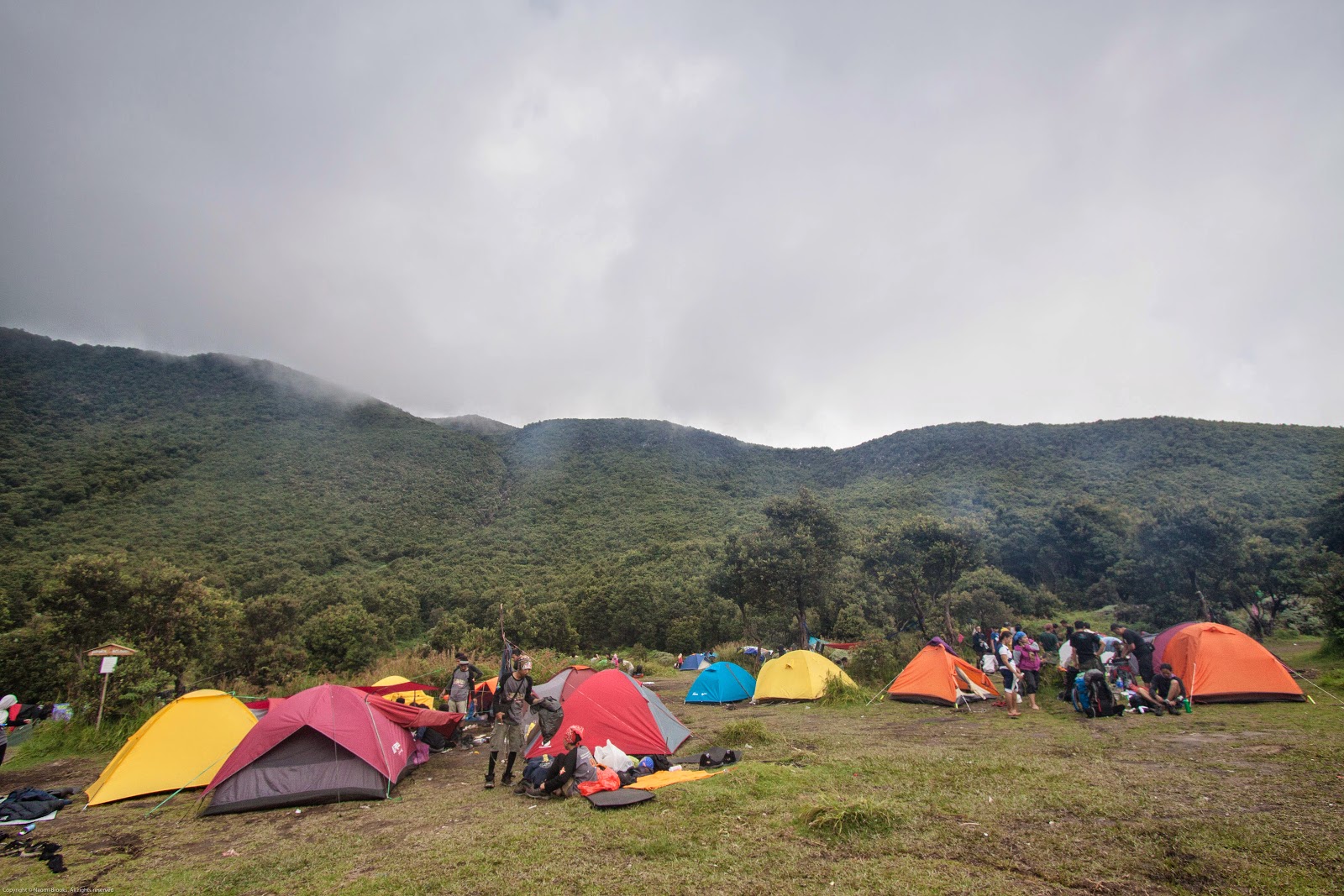 The boys, Robby and Becek, and I quickly find a campsite and set up camp before the rain sets in. We are only just in time, and I join them in their tent whilst I boil my billy for a nice warm cup of coffee. Mmmm... 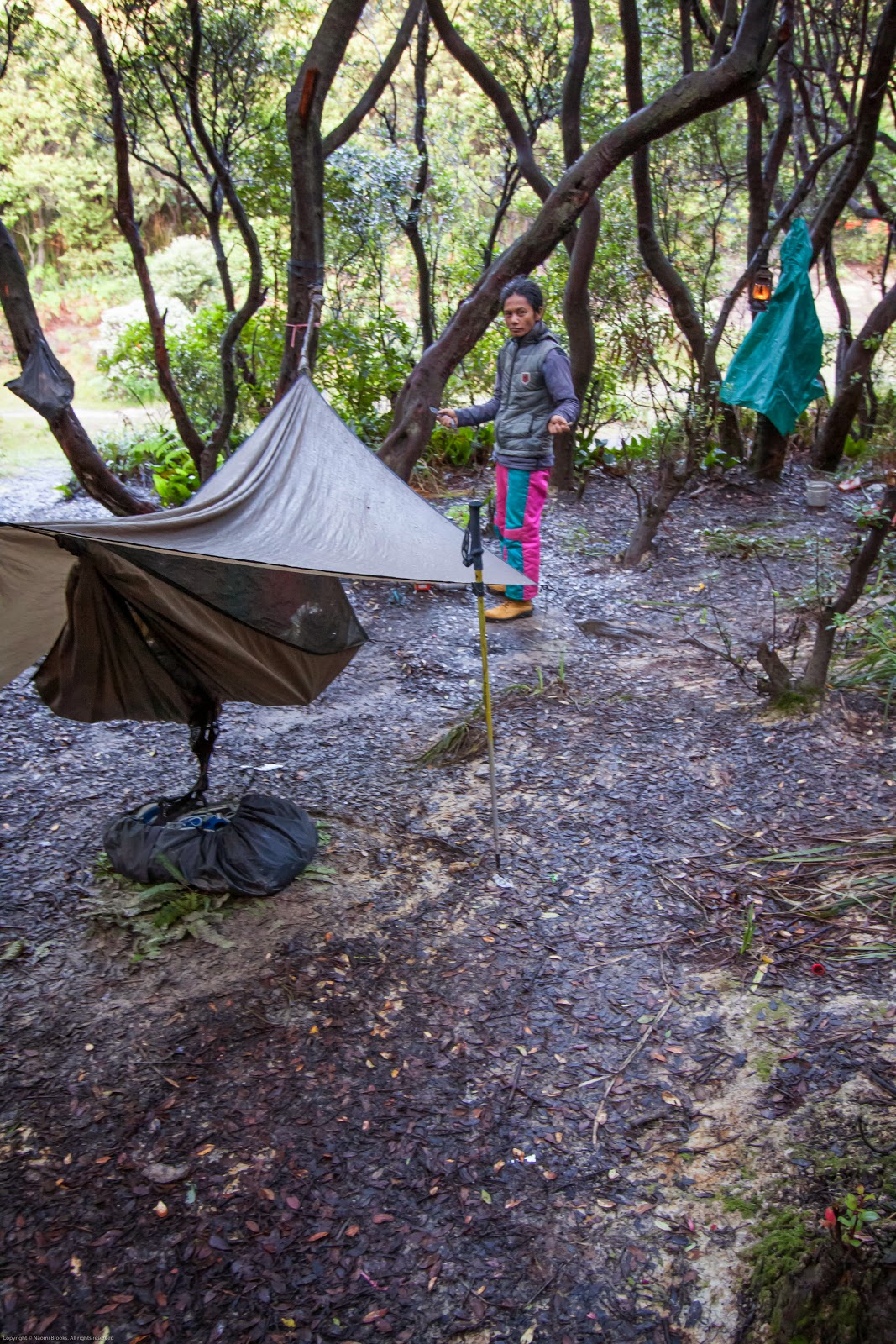 I've brought along a stove that uses white spirit, what we call meths at home. Here it required quite a bit of effort to find because you can't find it in any old hardware store like you would at home. I'd been told by Thammy (the Carita guy) that I could get alcohol at a dispensary, or apotek, but when I went to one in Bogor I discovered they just sell up to 70% for cleaning purposes, and the guy there didn't have any idea where I could get some. I asked in a few more shops, tried to find some info on the internet, but wasn't getting anywhere. Then one lady in a shop suggested somewhere near the markets, but that they would be closed on the weekend. Since I still had my cold and was staying a bit longer in town I made one final effort to find some. Short answer: go to a paint shop. That's Toko Cat (pronounced "chut") and ask for Spritus. It's 7000Rp for a bottle. Easy once you know how... 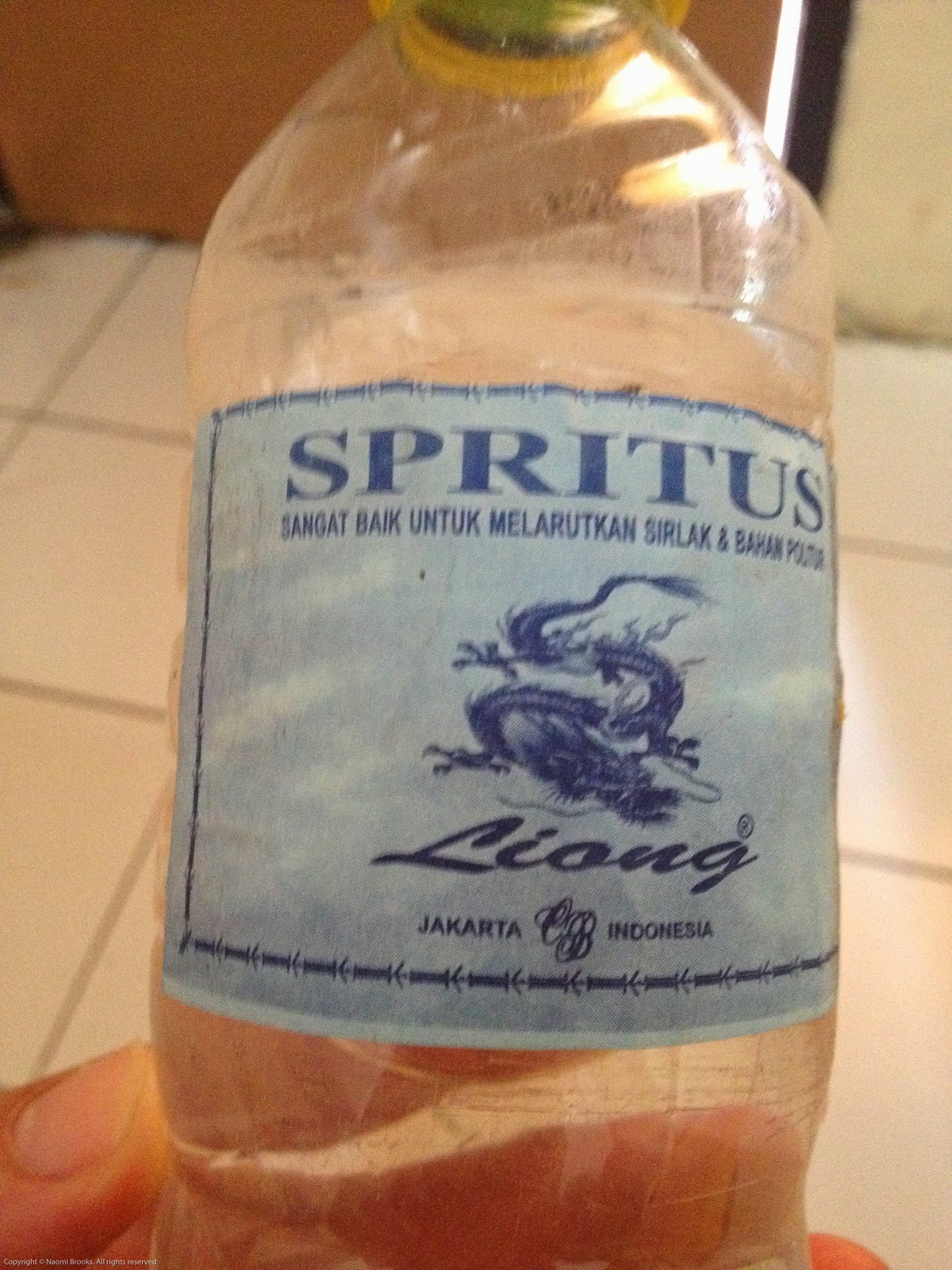 The rain settled in for the night. I cooked up some noodles and showed the boys my windsurfing video and a few photos from home, then I headed back to my hammock and to bed. It was cold so, after a little experimentation, I ended up placing my space blanket between my sleeping bag and the hammock to insulate me from the cold below. My clothes were damp from the rain, but the vest, the cycling arms, and my wool t-shirt over the top off all that, gave me enough warmth inside the sleeping bag to sleep fairly well. Dry socks helped too. The hammock kept me much dryer than the poor boys in their tent, who woke up to find themselves sleeping in a puddle. 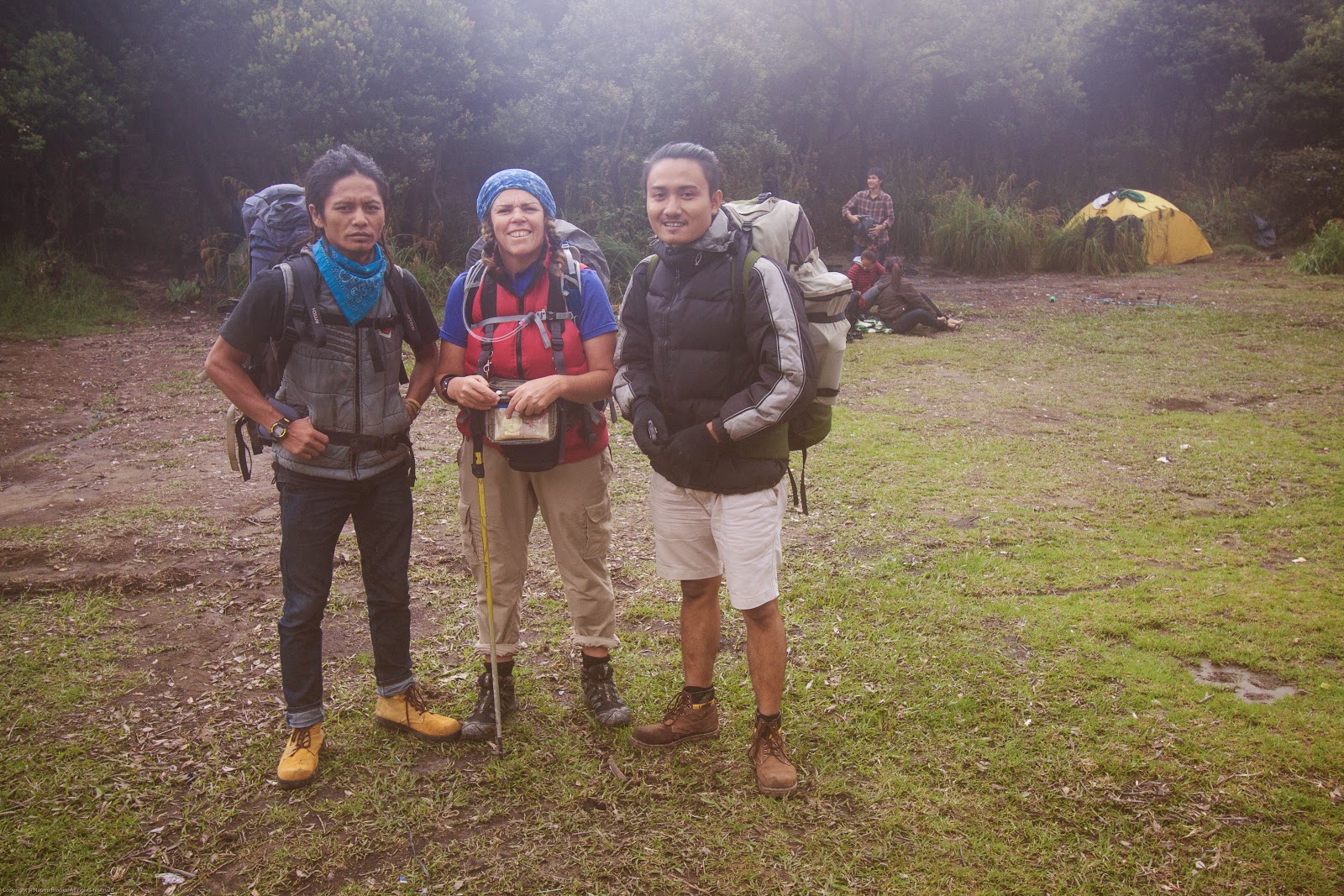 The rain cleared by morning and an early rise saw some blue skies before the clouds gathered again. There's a climb up to the summit and a field of edelweiss, but I wasn't keen, what with the clouds having rolled in again and the fact that I had a little unfinished womens business. The campsite, by the way, had a good water supply, so I was easily able to attend to my needs. This is definitely a situation where a Divacup is a much better option than tampons or pads. The boys were initially keen to do the climb, but a look at the clouds rolling in changed their minds and we all packed and headed back down the mountain, where we had to show our paperwork again and get crossed off as having returned. I even met another westerner, a French guy who'd also camped the night, but I'd not met him up there, what with the rain and the crowds. 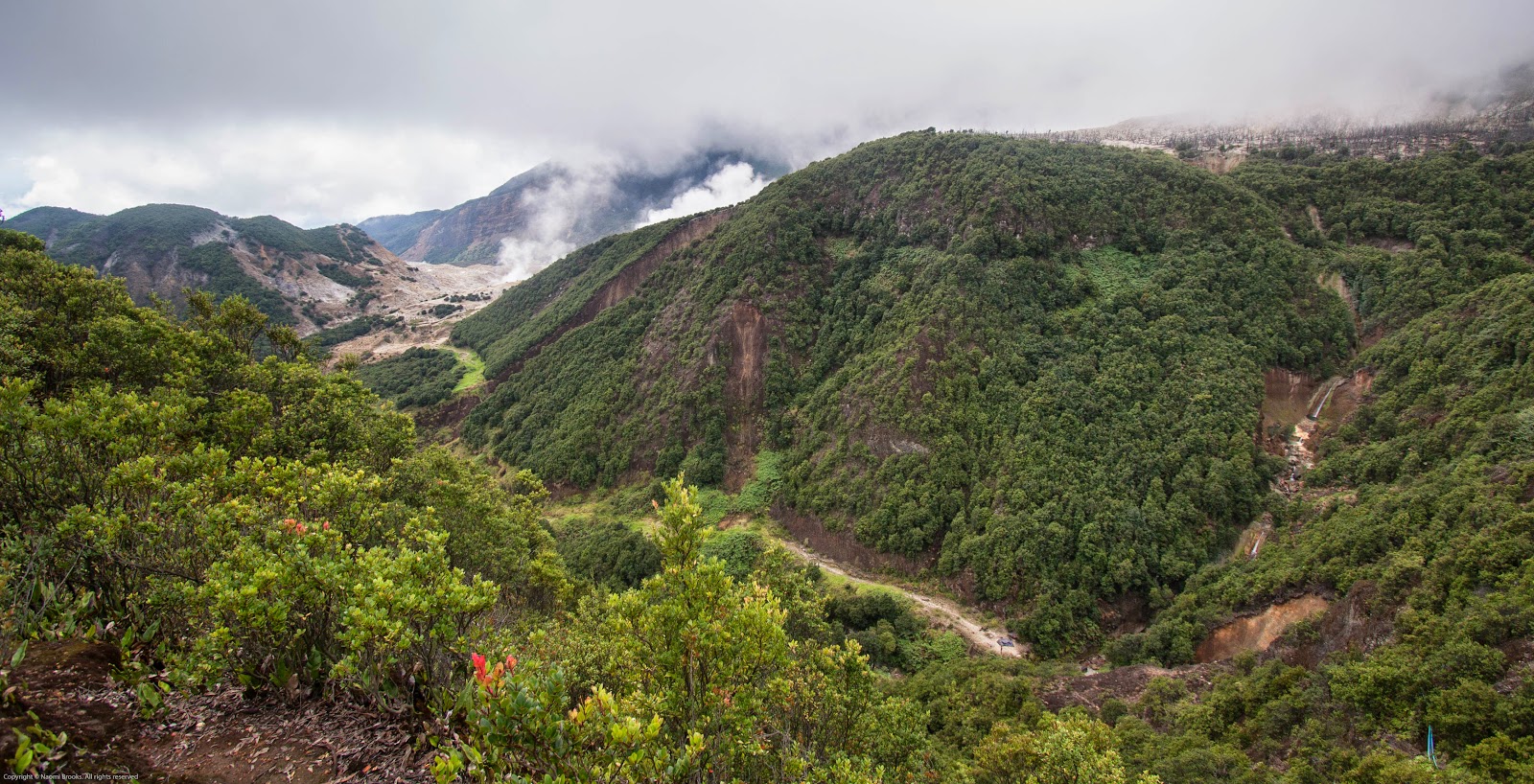 Back down at the bottom I took the opportunity to use the ladies before we jumped on ojeks again. The boys are from Tasikmalaya, and since that's my next stop, I jumped on the same buses as them. They gave me a hotel recommendation, and a bunch of places to see, told me prices of transport around town, then we parted ways. More wonderful friendly people in this great country. 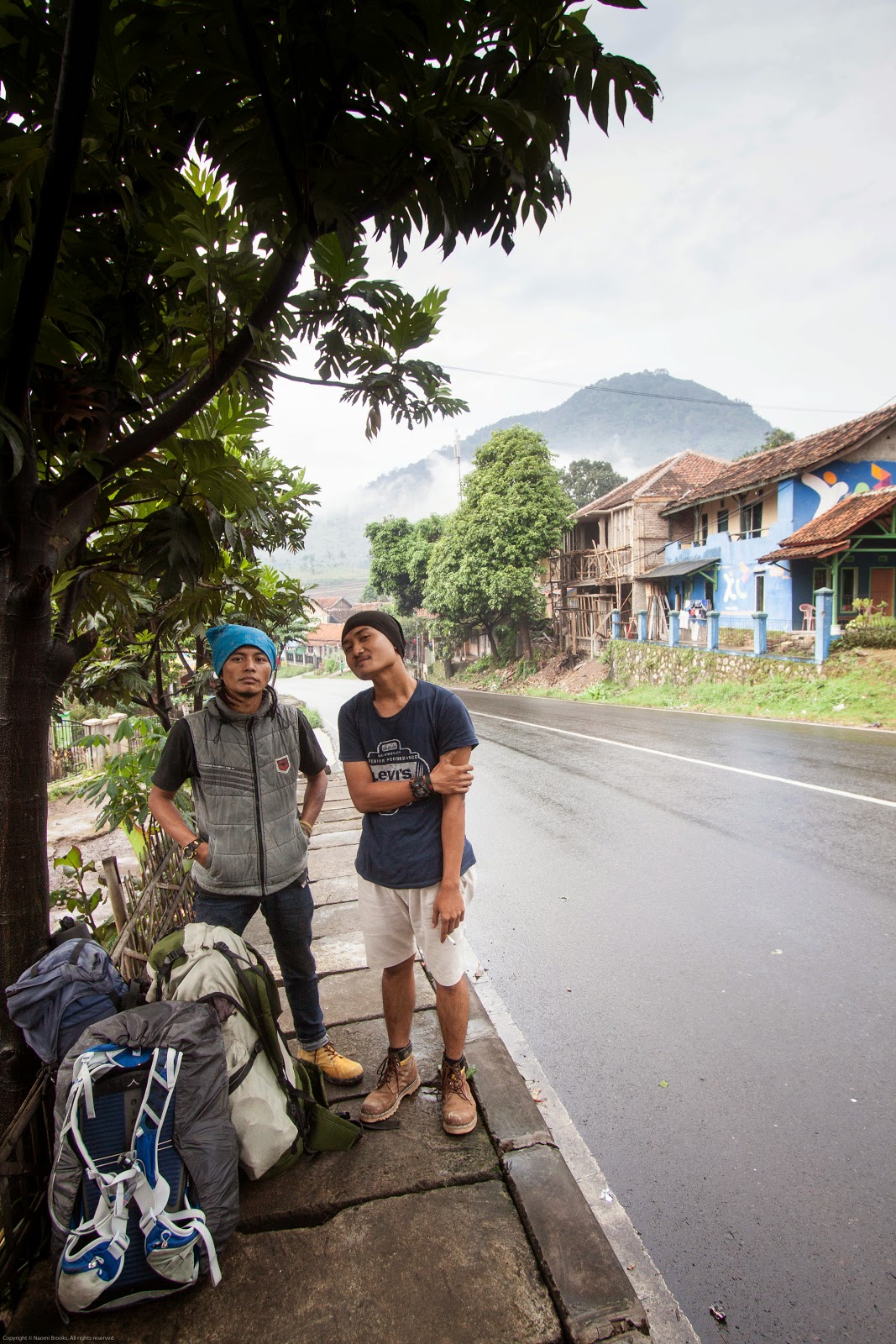 I'm staying at a hotel 13km north of the city centre. Even though it's on the main highway and also near the train line it's not that noisy and it's not right next to a mosque!! It's cheap (100,000Rp/night), it's clean, and the service is good. It's only 3000Rp into town on an angkot, so I'm staying a few days to wash the clothes, dry the camping gear, and see a few things round about.

The rest of the volcano photos are here.