Wandering in through the back door

After a week in Bogor I jumped on a small diesel train to Sukabumi. The train passed some of the most beautiful scenery: terraced rice paddies, cute little villages, roaring rivers, but I took no pictures, sorry...

In Sukabumi I found Angkot #10 by walking a little uphill from the station and was soon careening uphill towards Selabintana. A little Bahasa Indonesia goes a long way in explaining you don't want to stay at an expensive resort, but at a cheap place, so my driver drops me off at a hotel within my price range. I appear to be the only guest, but hey, it's clean, quiet and cheap.

Quiet is a little relative here. Nowhere is far from a mosque, and those folks keep unsociable hours. If  you want to pray at 4am, fine, but do we really need the karaoke?? The loudspeakers calling for prayers is actually really evocative, and some imams have beautiful voices. In Bogor each evening it was a beautiful sound, listening to all the mosques calling across the hills and valleys in the gathering dusk, but when they decide to give some kids the microphone to perform a screaming match, well it's a little hard to take when you'd rather catch a couple extra hours shuteye..

Hope you enjoyed those, I'm planning to bring you more soundscapes this trip. In fact, go back and check out the waterfall walk I did in Carita, as I've added some audio there too.

So, I unpack in my cheap hotel and head out in the hot midday sun to have a look around. I'm told if I turn left just after my hotel, that's the road to the waterfall. I also get told it's quite a few kilometres away, and it's too hot to go today, that 6 in the morning is a better time. Instead I wander through the kampungs, chatting to people, taking some pictures of some massive spiders, some kids and gardens and houses, then wander into a tea plantation. After a while, with the rocky track heading further and further uphill, I turn around and retrace my path. Some helpful but cheeky boys show me how to get back to the road and I wander back to my hotel, shower and head out for dinner. Nasi goreng, followed by banana and chocolate martabak. Nom nom! 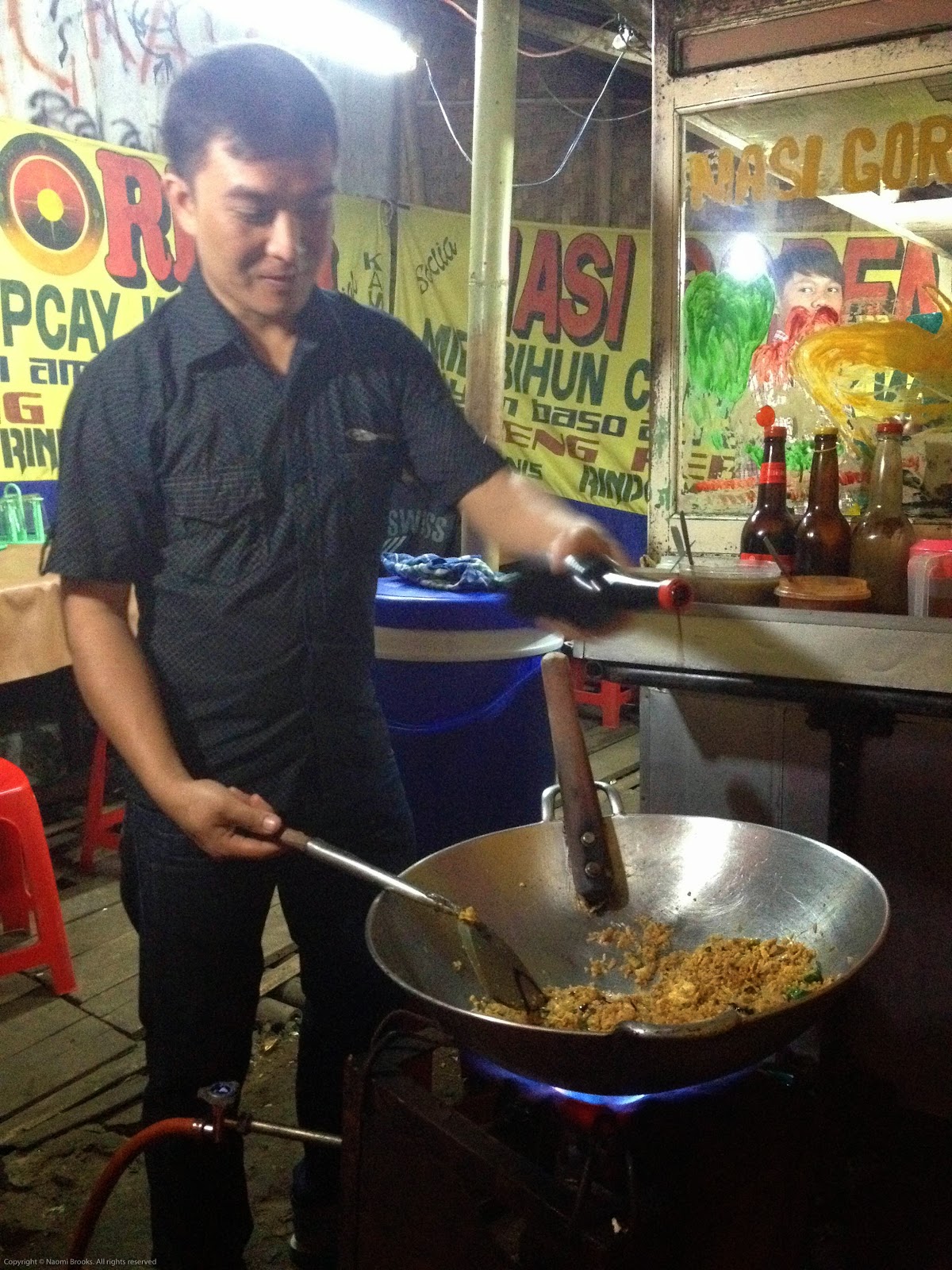 I try to download my photos to discover that my camera card is totally corrupted now, and I've lost all of today's photos. This is the second time this has happened. The cheap card reader I brought along appears to be the culprit, so when it did it the first time I went out and bought another card reader, reformatted my card (yes I lost a day's worth of photos) and went on happy as until now. Luckily, the second reader came with a small USB cord, so my new strategy is to download straight from the camera. Both cheap and nasty card readers are in the bin, and one 32Gb CF card won't reformat. I've other cards, and I'm downloading photos off the camera every day, so it hasn't been an absolute disaster. I would be devastated if I'd lost more photos.

I'm up bright and early (it's pretty easy to wake up early with your helpful 4am alarm from the mosque!) Thursday to take an ojek (20,000Rp) to Pondok Halimun, which is the spot where the walk begins. Mist is rising over the nearby hills and the deep green tea plantations patchwork the foreground. It is indeed a long way and I am glad for the ride up on the motorbike. The guard post is still closed when I wander past at 6:30 and begin my climb.

The walk to the waterfall is along a path laid with rocks, and its signposted. This means you can't get lost, and there's quite a few interpretive signs as well. They may be in Indonesian, but they aren't too hard to follow. 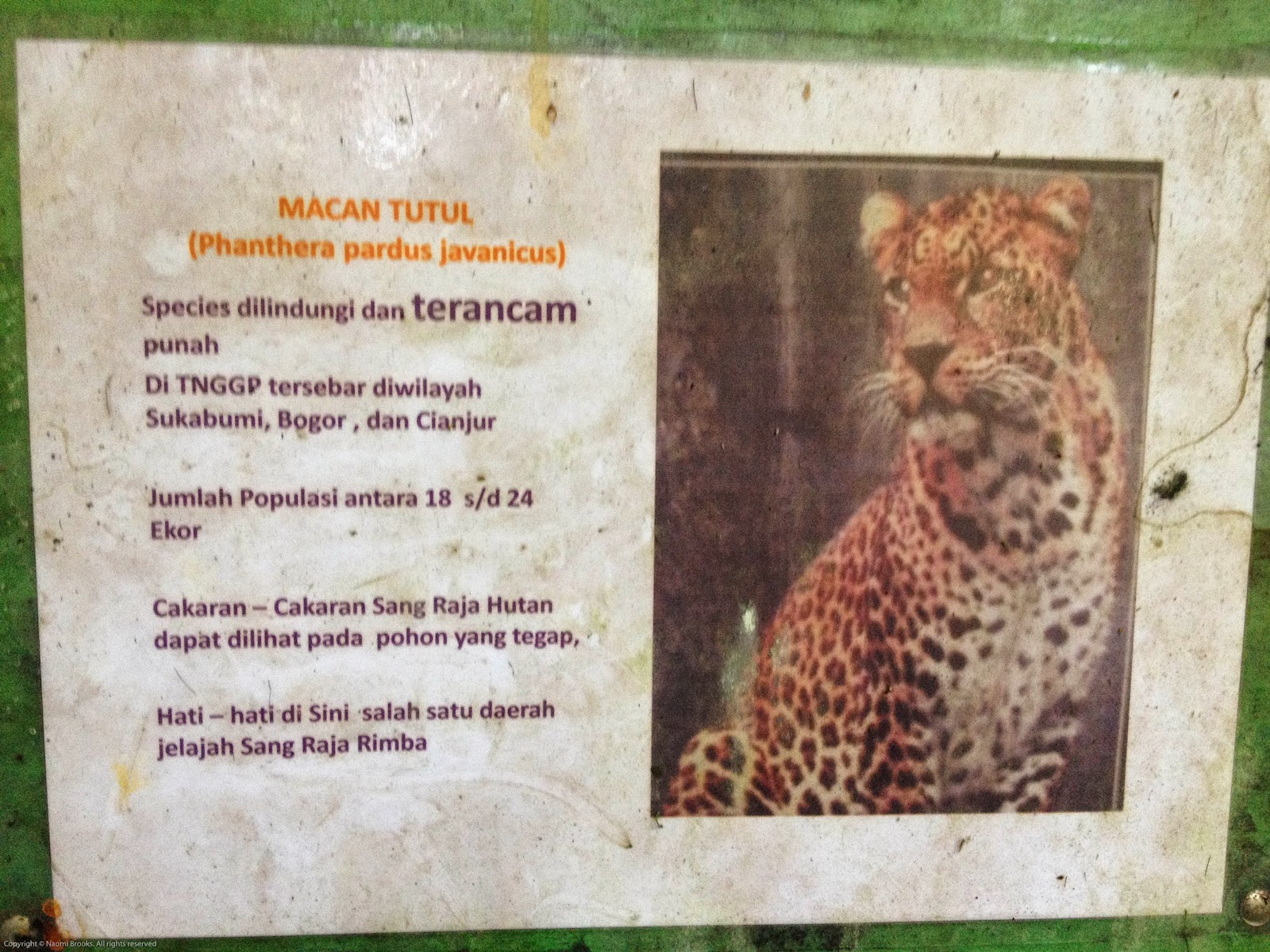 The rocky track can be a little slippery as the ground is always wet. I'm so glad I brought along trekking poles on this trip, they make it so much easier and safer. My knees are giving me a bit of curry this trip, but I just try and ignore the pain and keep going, knowing they'll come good with more use. The poles help. 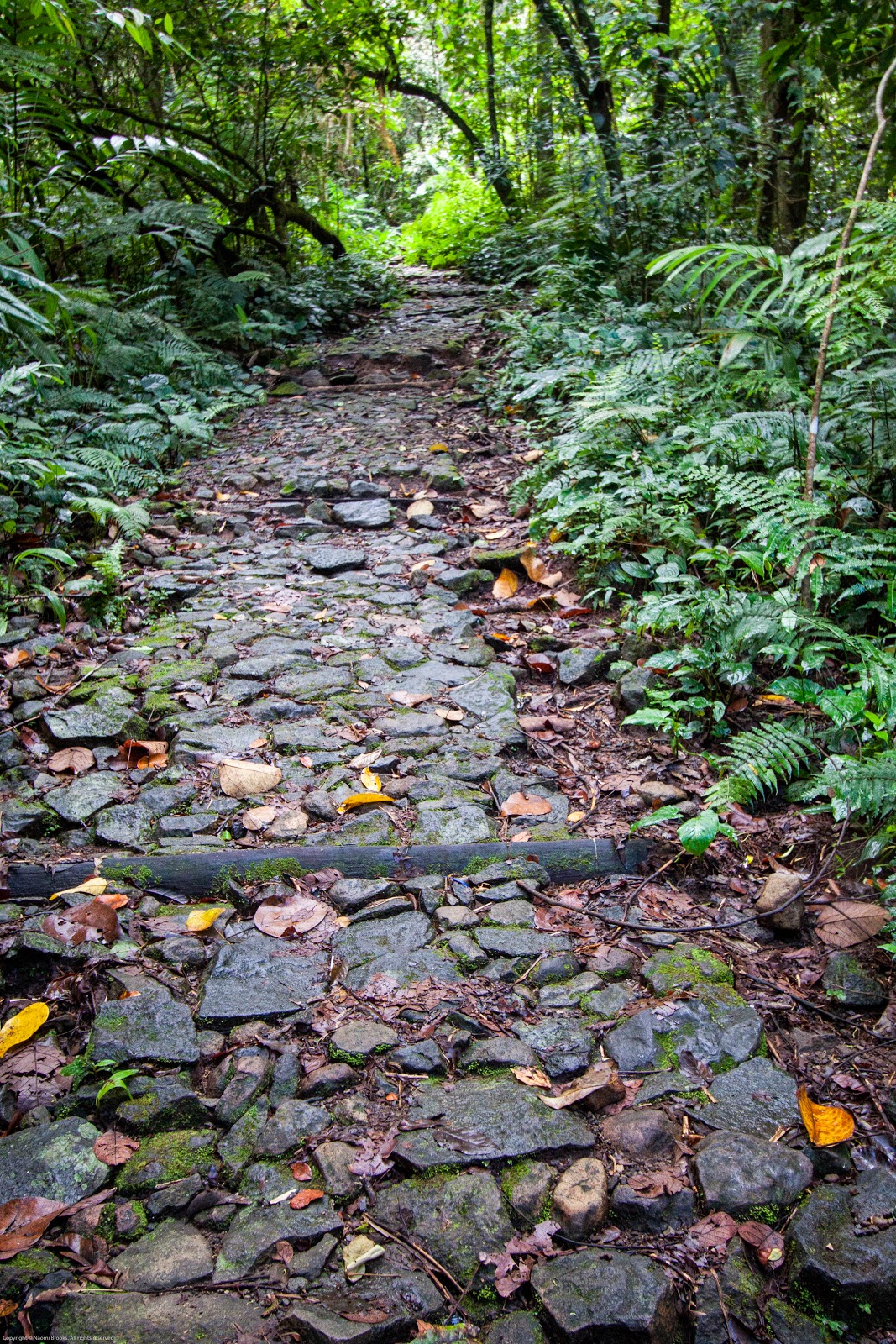 There's a lovely bubbly stream or two along the walk, so I pull out the tripod and filters for some dreamy moving water shots. I'm getting better at them, just need practice. 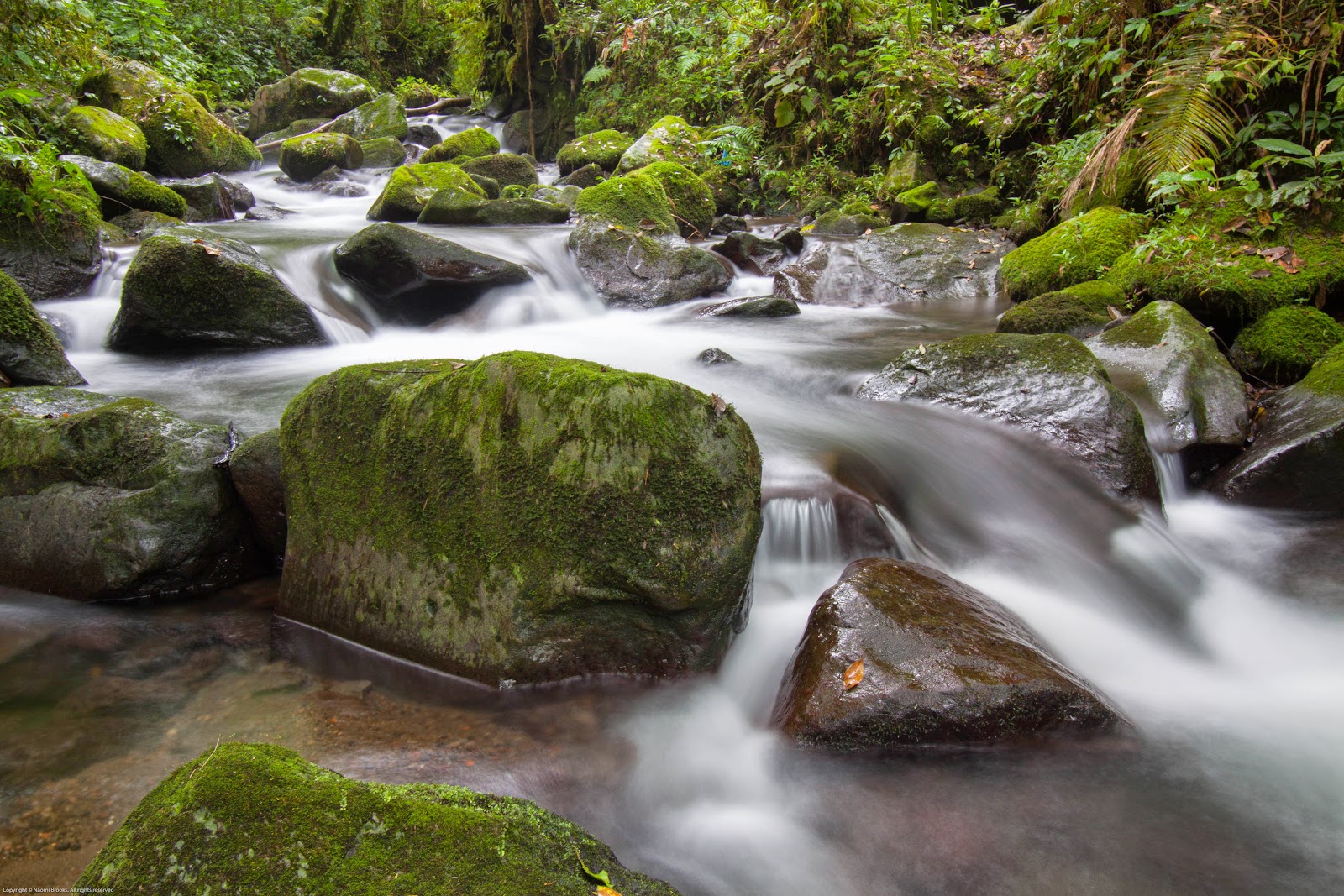 The undergrowth is very lush and I am in shade all the way. This is a proper rainforest, with a very healthy tree canopy. I see one monkey and hear a few others, and I don't see any leopards!

The waterfall can be first glimpsed from the track just before descending into the valley, and it's magnificent. It falls into a small pool from a very great height, making its own wind. It falls down a sheer rock face covered in vines and creepers and there's spray everywhere. I fail to get a shot I'm comfy with, being just too close to avoid water droplet halos and the like. More to be learned here.

It's about 9am when I get to the waterfall ( I stopped often for photography ops) and I am the only person there. No one else, just me and the magic. How good is that? 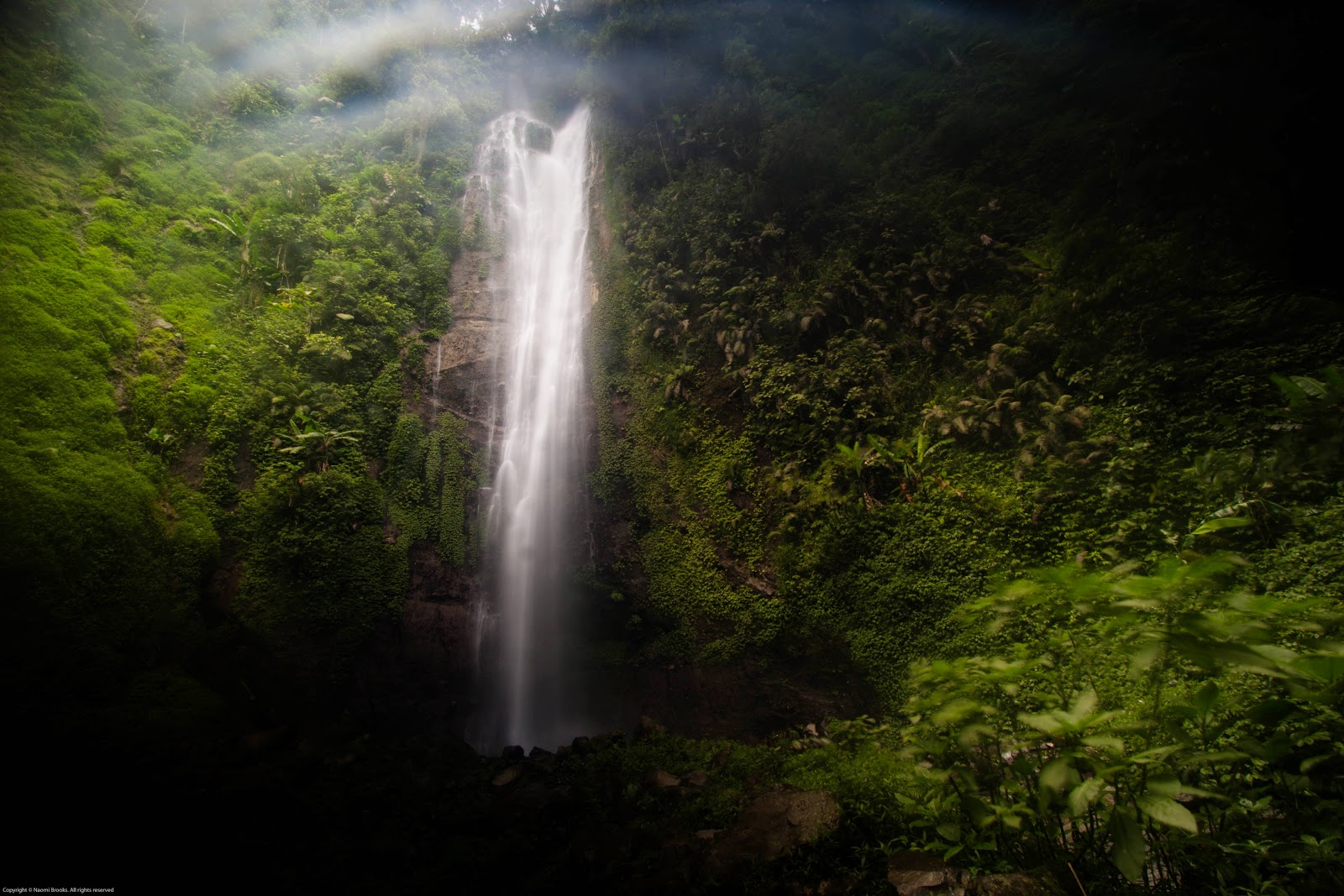 The walk back is easy enough - except for those slippery stones - and I find one more stream for me to play with. I also find a flower of what looks like a ginger species. 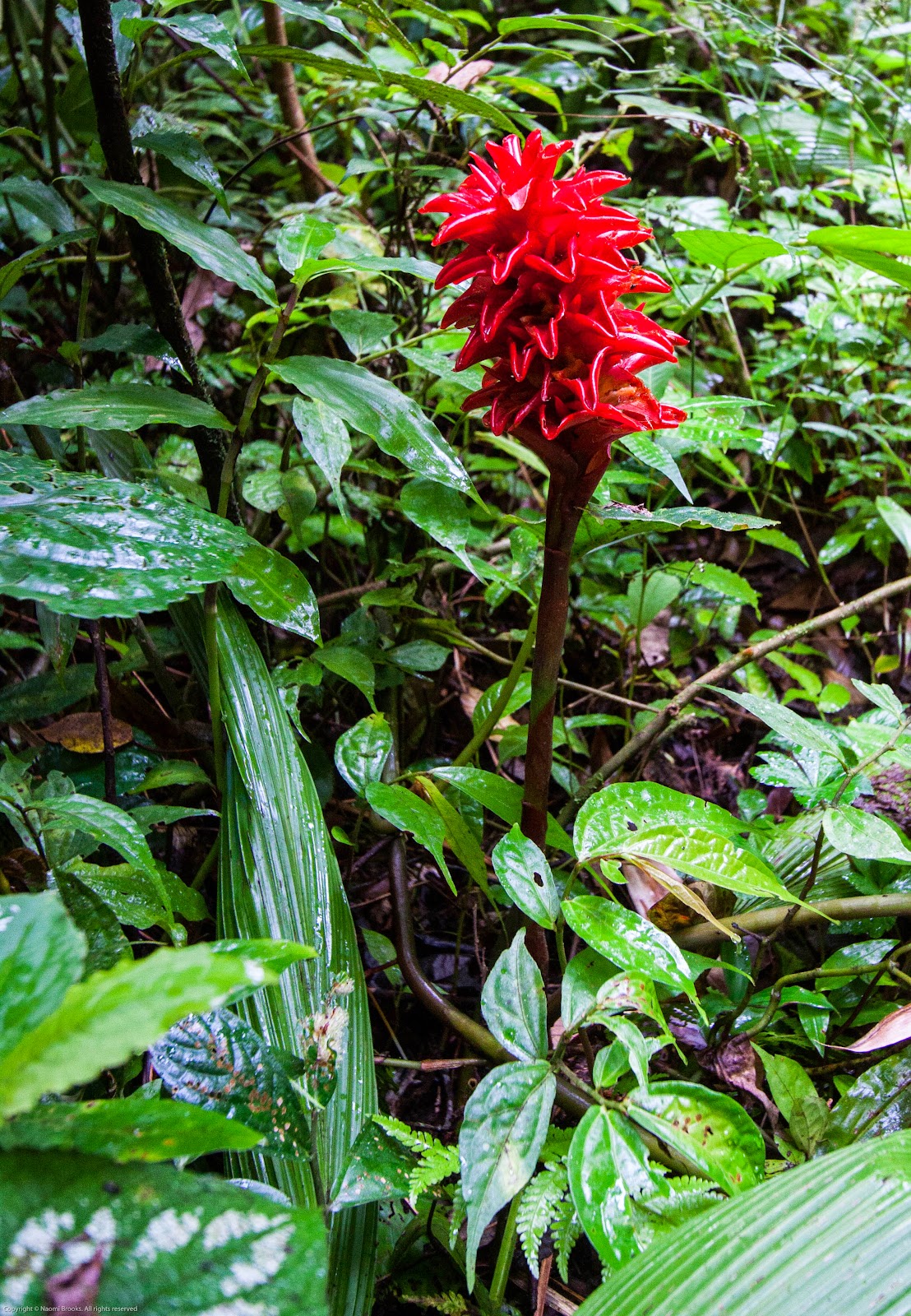 Back at the guard post the staff are all now at work so I wander in to have a look at the exhibits. They have a couple of camera traps for sighting the leopards - leopards sleep during the day and hunt at night - and run educational programs for school kids. They give me pamphlets and stickers and sell me my entrance ticket. They only charge me local price, I don't question it... 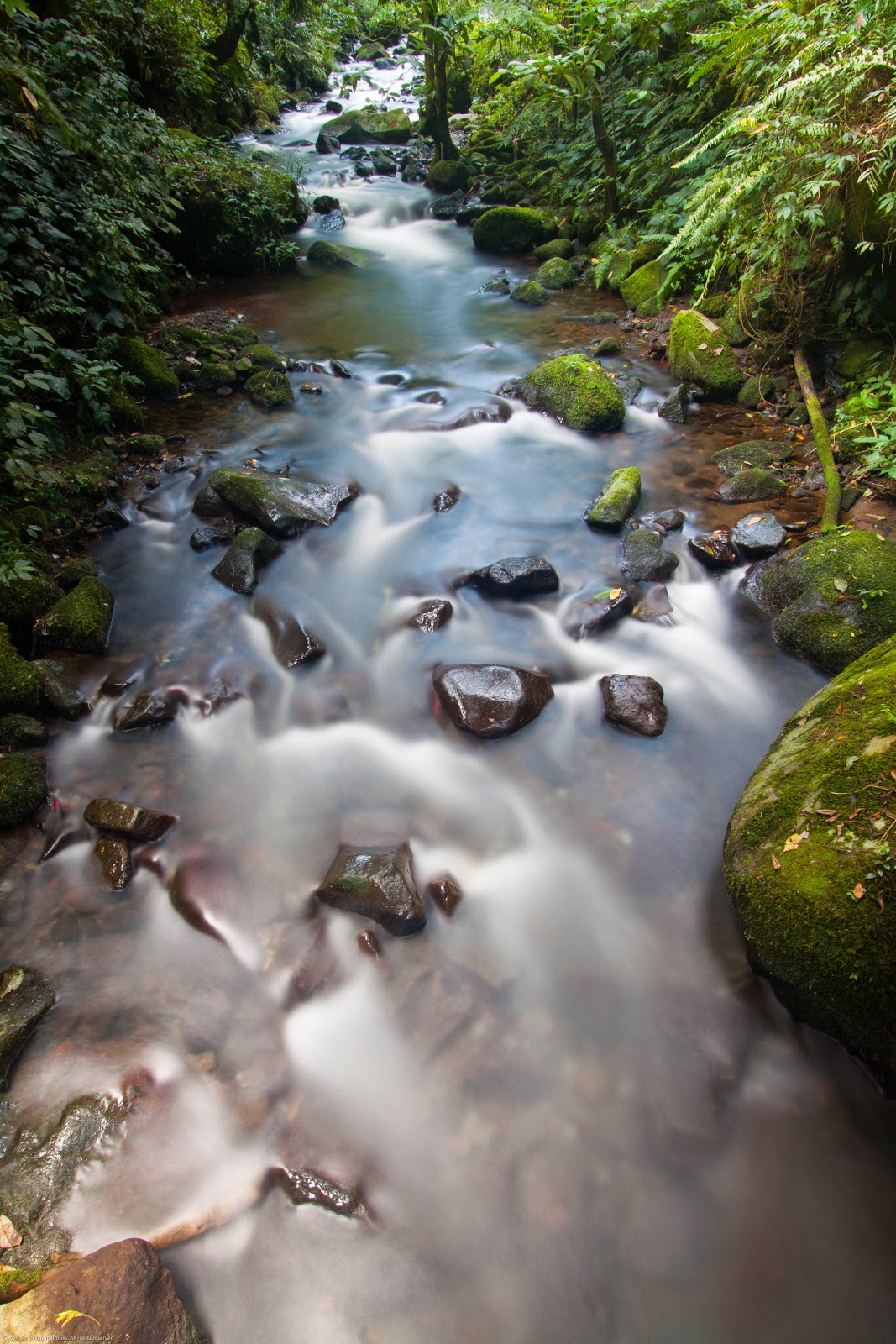 I also enquire about walking up to Gede, the active volcano around here. It seems I have to get the permit from the Cibodas main office on the other side of the mountain, so that kind of stymies me. It's totally possible to just walk on in though and not say you were going to Gede, or to go early before the post opened. But I think I'm going to give Gede a miss - there are plenty other volcanos to climb.

After I leave the post I stop at the warungs at Pondok Halimun for a grilled corn cob then wander off along the road back. Rather than take an ojek back down I'd rather walk. I'd also seen a suspiciously familiar rocky track between tea plants join the road and found this track only a couple of hundred metres back along the Pondok Halimun road. I remembered the big green mosque on the hill, yep, this was the track I'd been on yesterday. What a great shortcut, I reckon it would have cut at least 3km off the return trip. 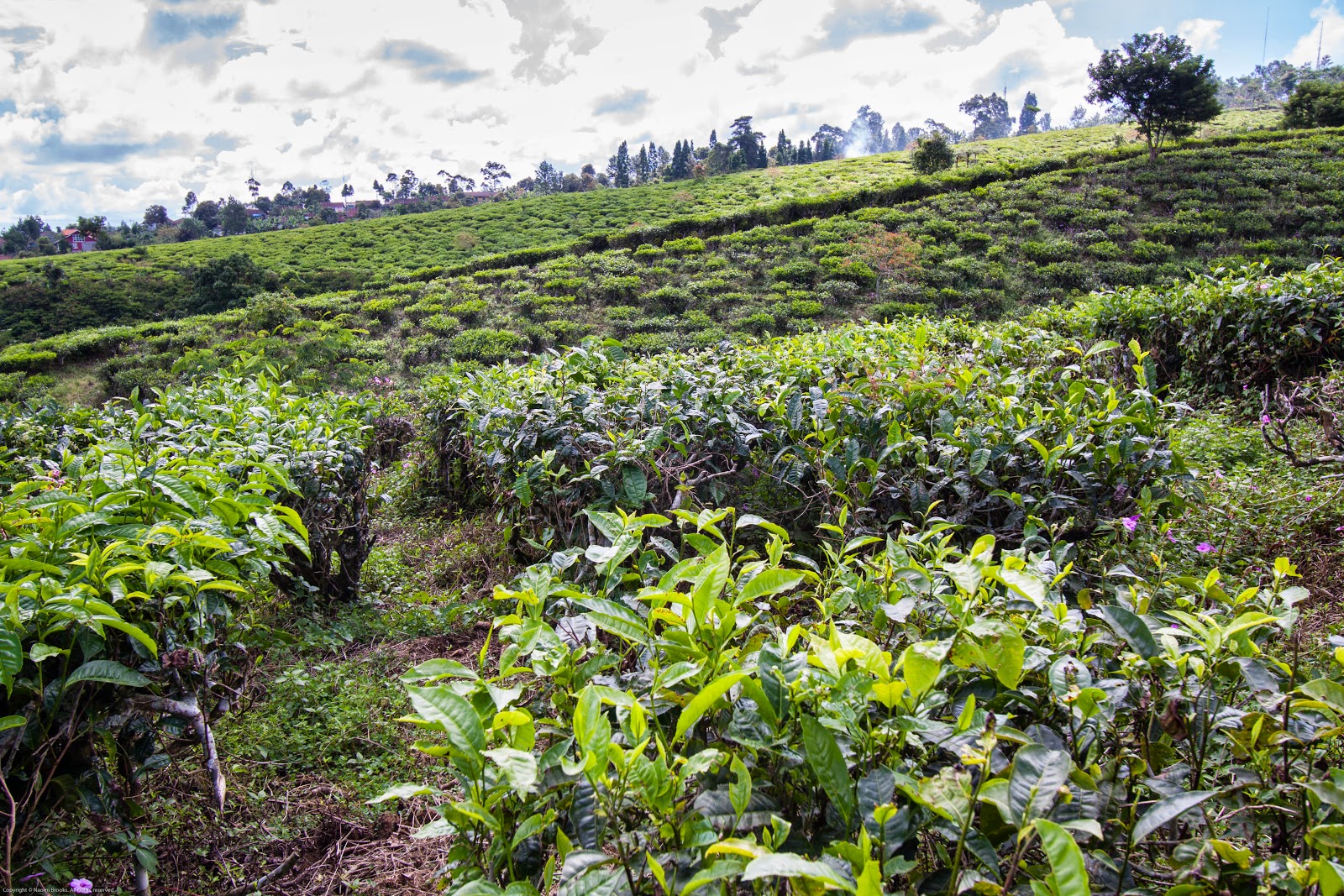 Back down in the kampungs I manage to find a way across to the top of the road I'm staying on. This is where all the posh hotels are, and a few flash private residences too. I have my fresh coconut juice and wander back down the hill to where I belong... 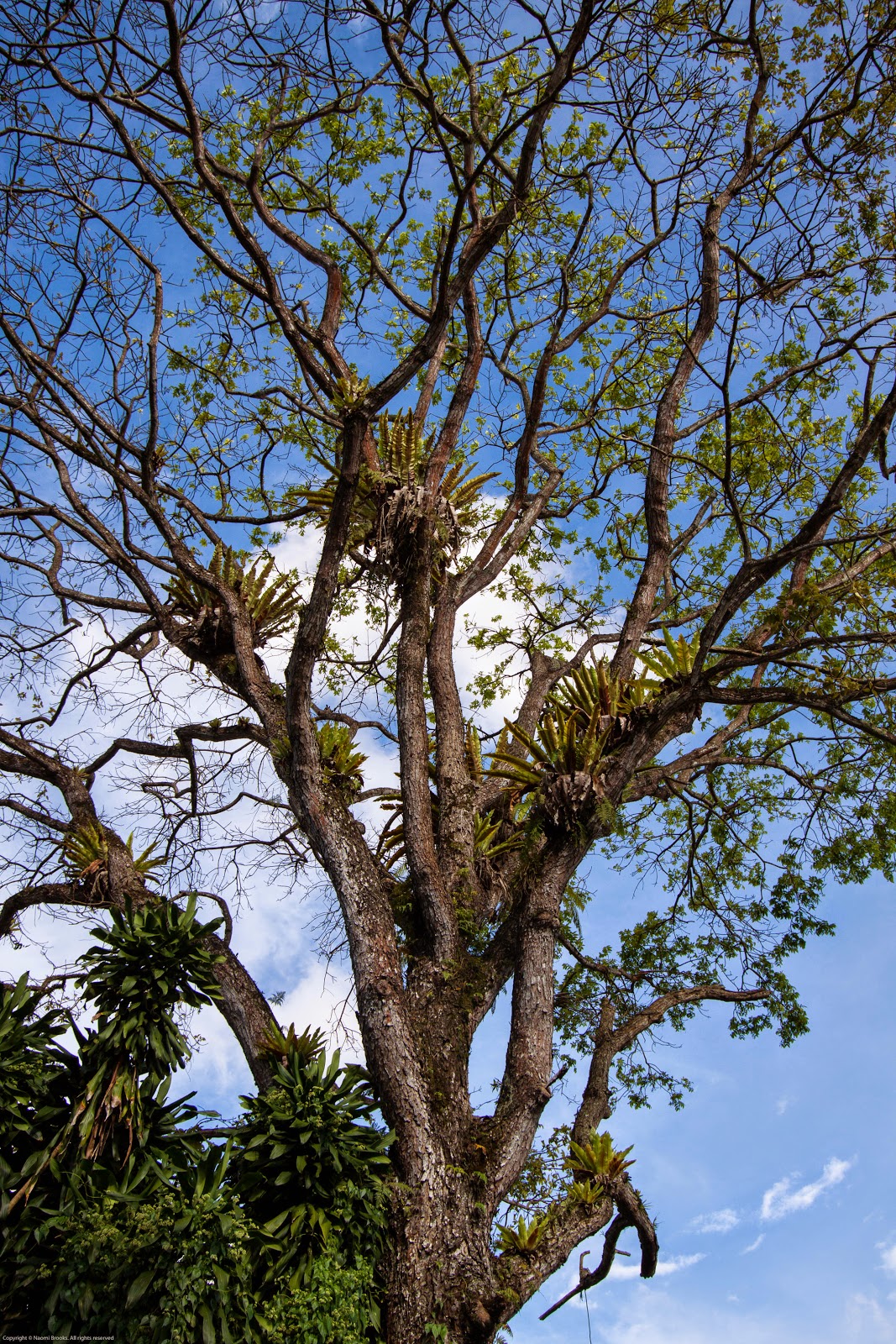 I'm still nursing a head cold, and have an annoying cough. With everyone smoking around me it's a little unpleasant, and it means my mucosa will take longer than usual to heal. Even in my hotel room I can smell smoke from nearby cooking fires - it really is unavoidable. So I pack lots of tissues and the snot factory rolls on...