The road to the end of the earth

The guidebook said it was a bad road. A trip report from October last year mentioned the torture of it. But I wanted to find out for myself. And yes, it lived up to the hype; a 92km trip took all of 5 and a half hours! 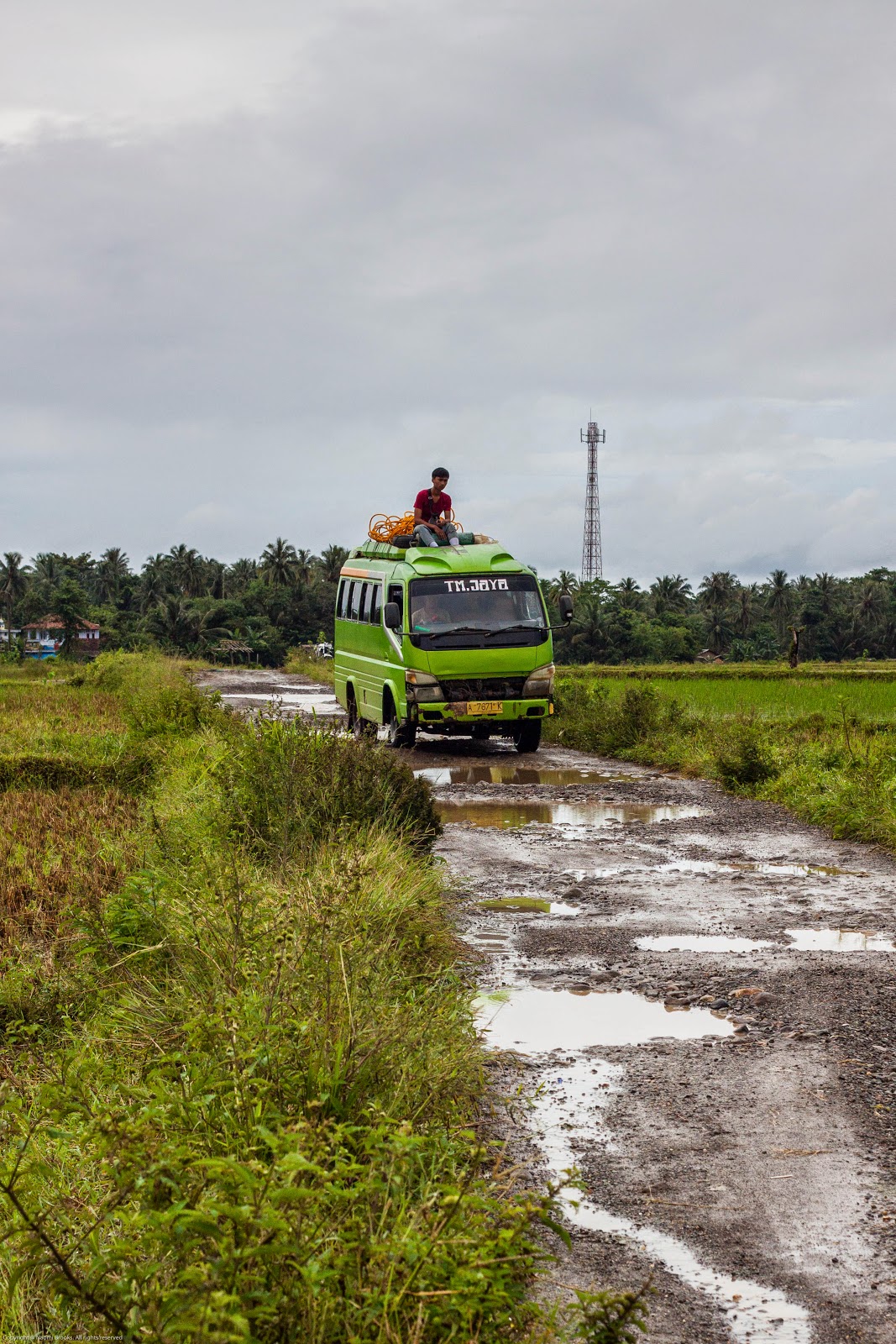 I've made it down to the southwestern corner of Java, to a small village called Taman Jaya, which is the entry point by land to Ujung Kulon National Park. This Park is the home to the last remaining Javan Rhinos in the wild. There are 58 individuals, 12 juveniles, so they are at least breeding. Not that I'm likely to see a rhino on my visit into the park, the old chaps at the guesthouse tell me you need a month in the forest to be likely to see one. One fellow has seen a rhino once, the other four times, so my likelihood of seeing one: less than zero!!

As usual, acquiring transport in Indonesia is easy, but it isn't always timely. An angkot ride into Labuan is simply a matter of flagging one down, and then I was herded straight on to the bus to Taman Jaya, which of course didn't leave for a full hour and circled around town picking up cargo and passengers. I did, however, have the coveted front passenger seat so I at least had a view, and probably the most comfortable ride. From Labuan to Sumur, a distance of 73km, the road was fine, though the driver had to be the slowest driver of a public vehicle I've ever experienced. Not that I'm complaining! From Sumur the final 19km did indeed deteriorate to a potholed dirt track - I've been on better 4WD tracks! Our careful driver ensured that what could have been an endurance test simply became an uncomfortable ride. Bumping along past rice paddies where the harvest is in full swing, with the ocean on one side and not a crappy resort in sight, I'm liking this area a lot. 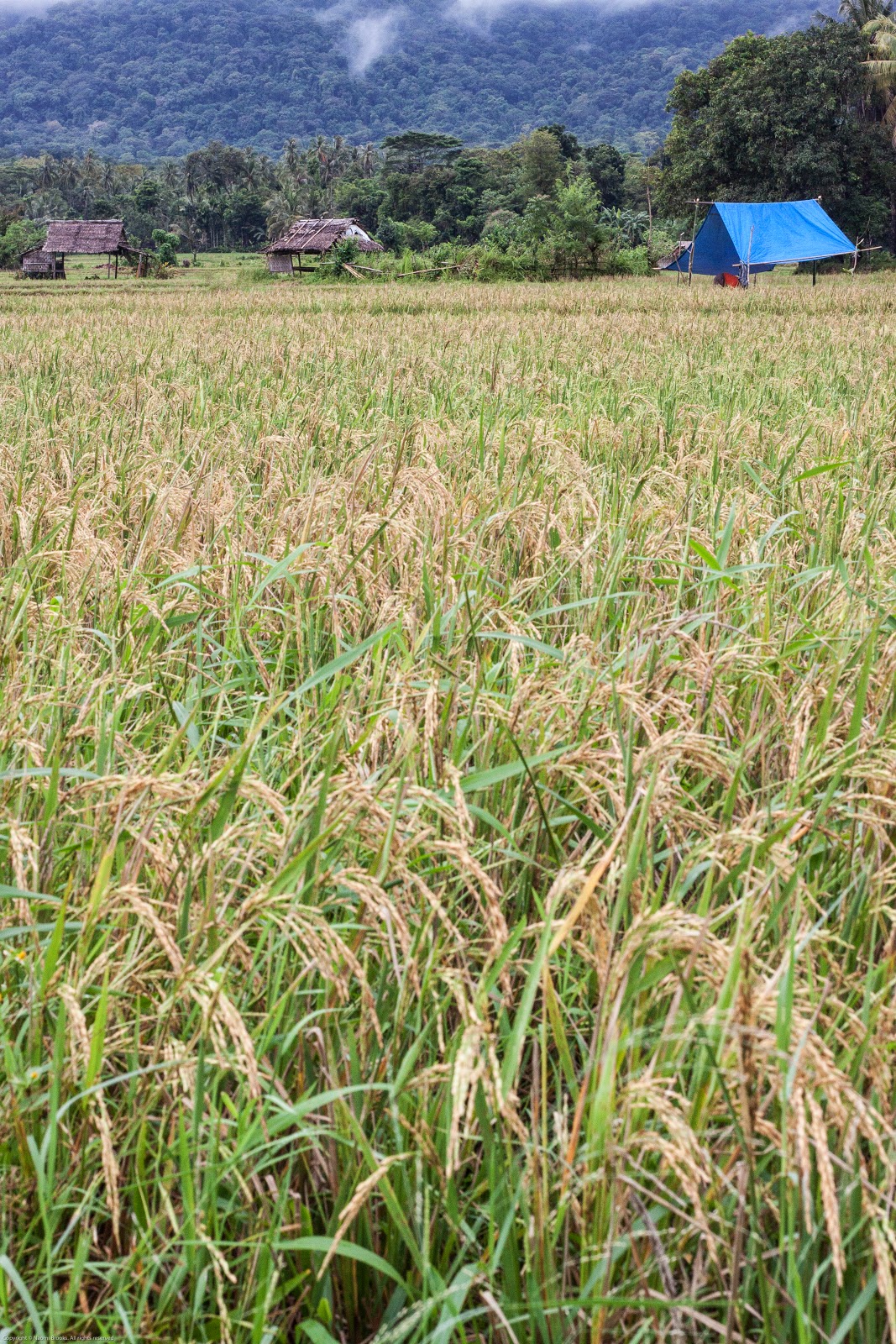 A profound sense of calm descends upon me as I arrive in this little village. It's exactly what I've been looking for, a quiet backwater at the end of a long road. I have a feeling I may stay here a while. Not only is there a World Heritage Listed National Park on my doorstep, but the fishing villages and rice paddies surrounding here are eminently photogenic and the people are incredibly friendly. Even the sate chicken I had for late lunch on arrival is almost as good as sate madura!! There's no internet coverage down here however, though there is still mobile phone reception.

The homestay, Sunda Jaya, is a comfortable place set back from the beach with a bamboo verandah, free tea and coffee, and plenty of trees to swing a hammock from. Only one problem though, it's raining. On my first morning here it is obvious that the skies will not clear all day, so I chill on the verandah till late afternoon, when the skies clear enough for a stroll to take pictures of the nearby fishing structures. Fishing occurs here on a massive scale as evidenced by the acres of bamboo racks set up along the shoreline for drying them. They build these modified boats completely from scratch, almost entirely of bamboo. What an amazingly versatile building material. As it is the end of the wet season, and the fishing season hasn't started yet, there is lots of work going on making more of these "boats" for the next season. 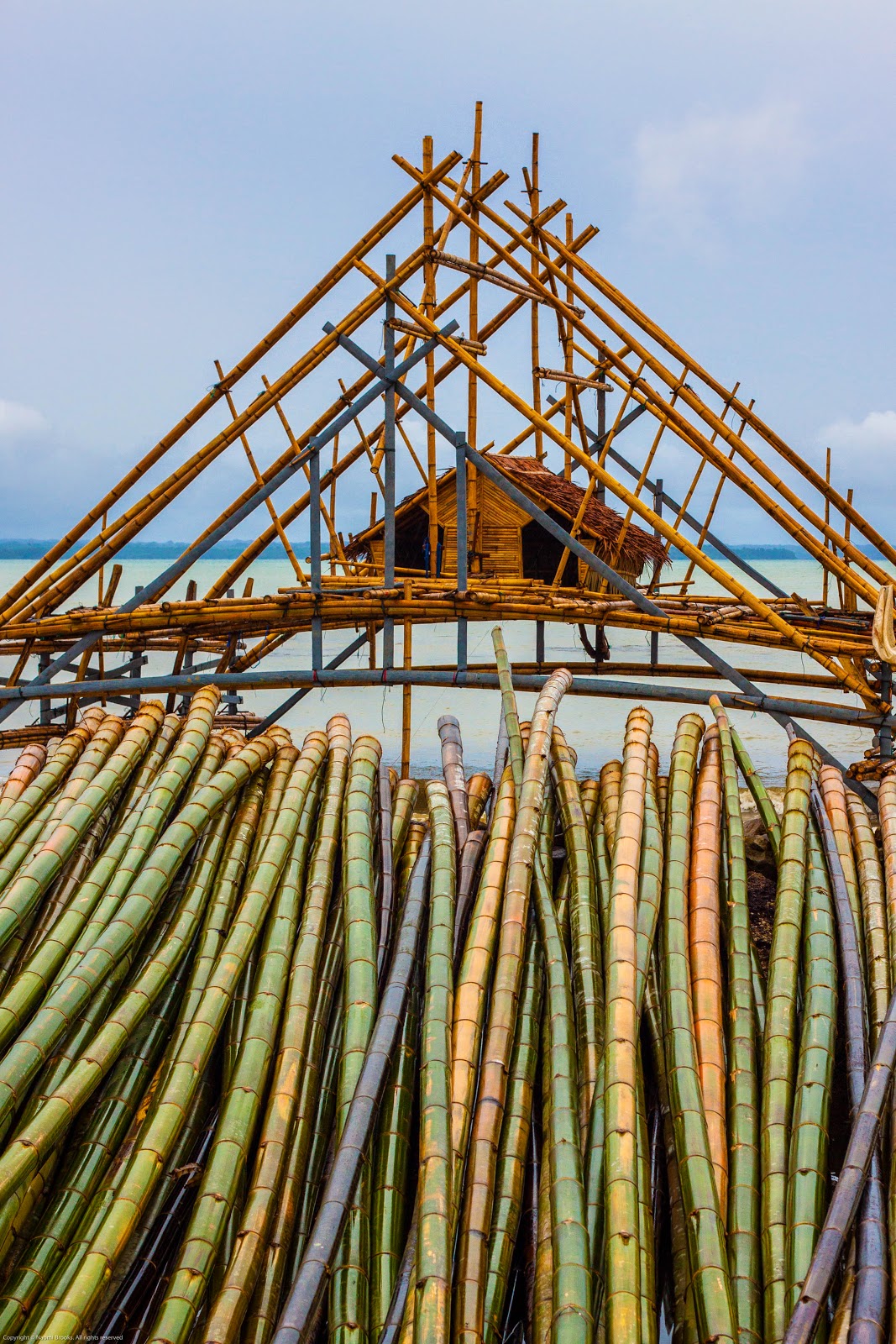 My stroll doesn't quite get me to the nearby larger village which we passed on the way in the bus. I need to turn around before it gets dark, but stop to chat to a couple with quite a nice house in the middle of some rice paddies. It turns out the husband is not a farmer but a fisherman, has travelled fairly widely within Indonesian waters, and even as far as the Phillipines, and the house was built with money from fishing squid. Although they don't speak a word of English they are extremely hospitable and even invite me to come and stay with them - for free! 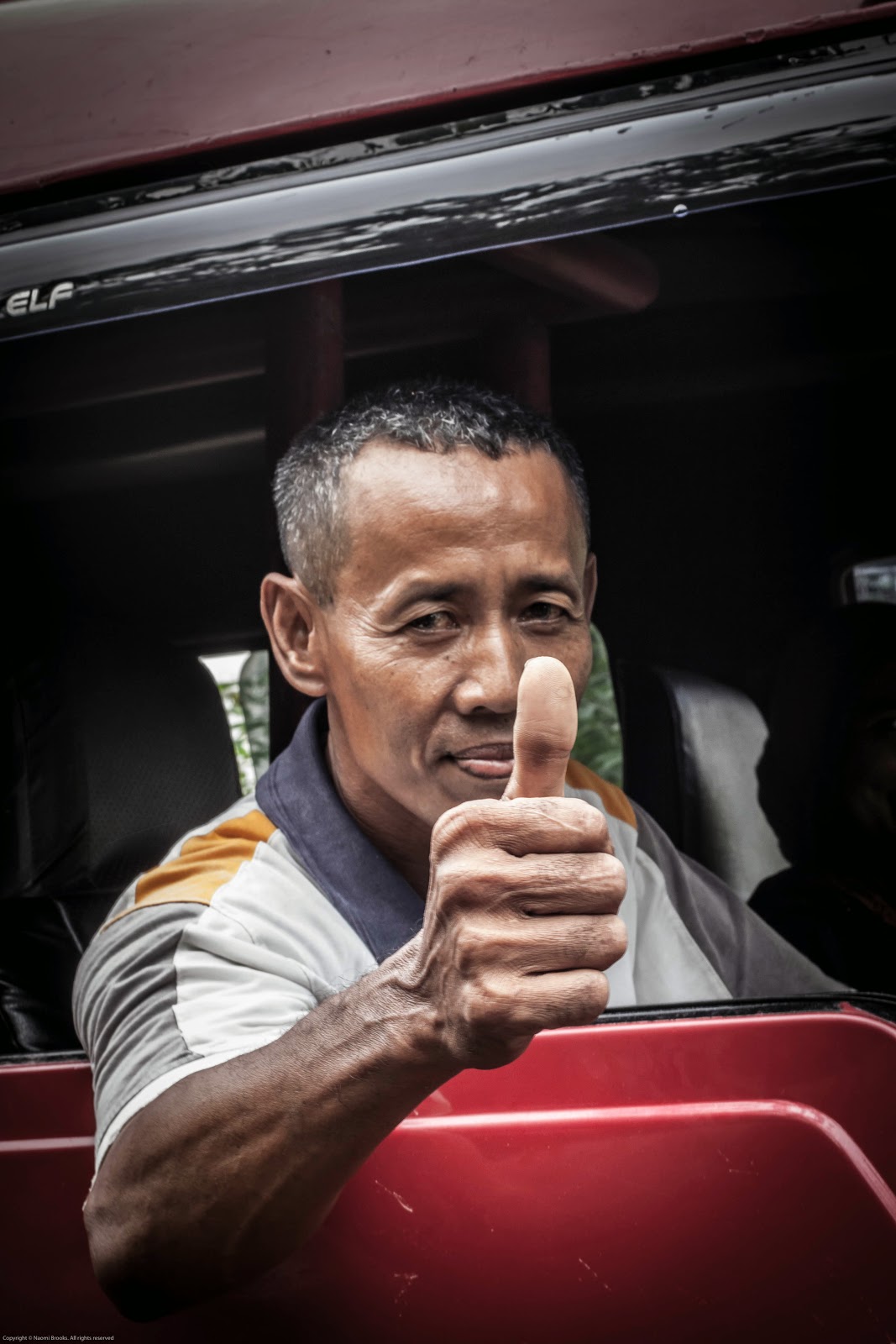 Actually the people here are all very friendly, lots of "hello mister"s and "what is your name"s, even if they don't know what the second question even means! People smile warmly and are pleasantly surprised that I can speak a little bahasa Indonesian with them. When I return home in the dark and miss the turnoff, some locals point me back the way I had come. Back at the homestay Sebastian, a French fellow who had headed out on a 2 day trek in the morning, before the deluge began, has returned, and there is also a German couple who arrived back from the jungle today, looking rather wet and miserable. A third room is occupied by a Chinese tourist. On Sunday morning they all leave on the bus and I am left here alone.

I am hoping to do a boat trip across the bay and up into the river estuaries by canoe, but the weather is not being very friendly. The guesthouse boys are also being less than forthcoming about the price. If the rain doesn't stop I shall have to rethink my plans and consider returning here another time. It's not like the park is going anywhere. Even though the prices to enter National Parks in Indonesia are scheduled to be increased exponentially next month I can see no reason to deliberately have an unpleasant time in the jungle just to save some money. Simply chilling at the guesthouse, and going for short walks to the villages, has been extremely relaxing and worth the trip down to this little patch of paradise. 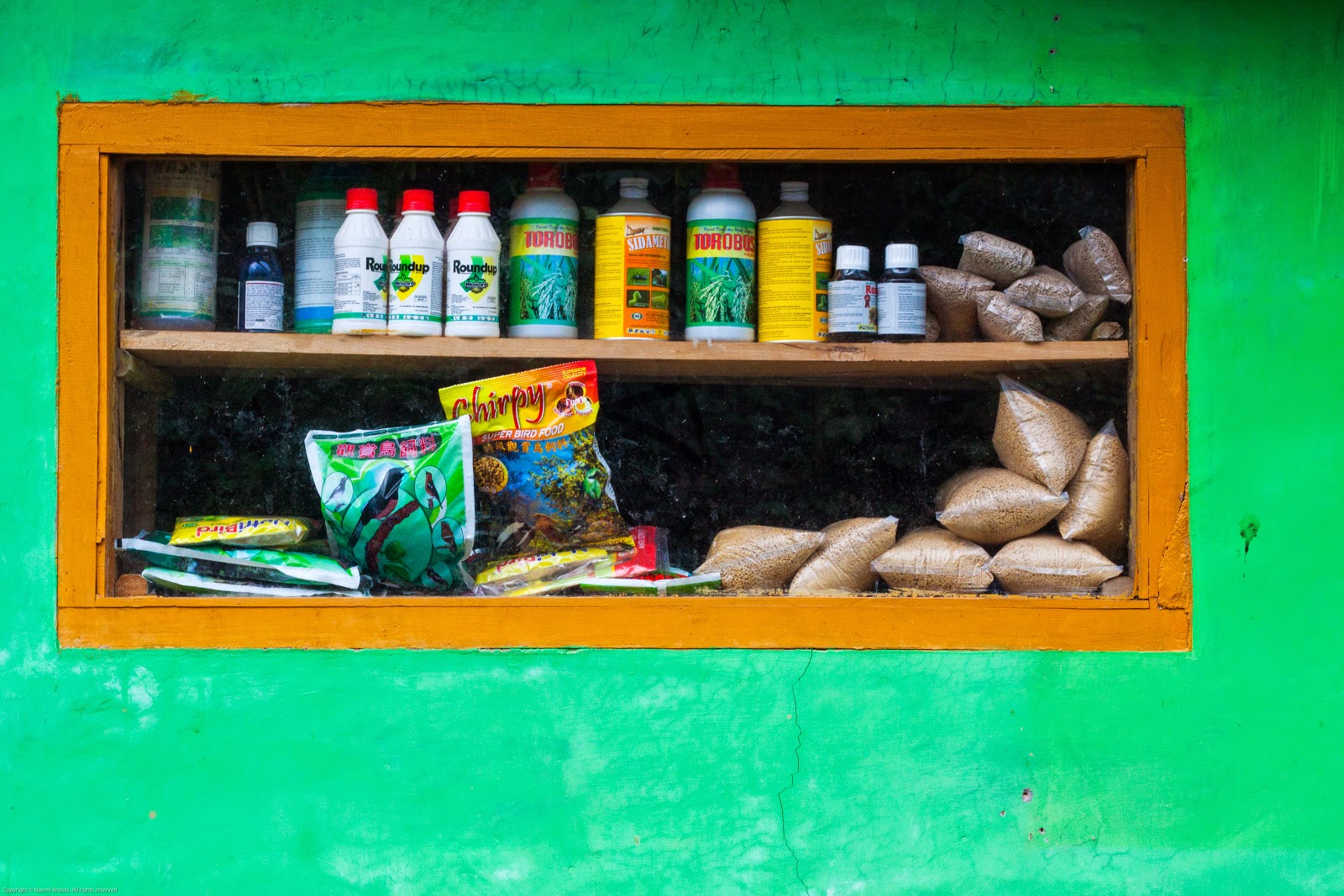 The rain cleared around 2:30 on Sunday afternoon, so I went walking in the other direction. Rice fields spread out on each side of the road and the locals greet me as they ride by on their motorbikes. Nobody walks here, when a motorbike can get you there quicker, and for next to nothing. Even the kids ride them. It's not a bad idea given the road is half under water and I can only marvel at their skill navigating around and through the puddles, often with full family on board.

In the evening 3 German chaps turn up, complete wth guides, from Jakarta. One is working at a wildlife centre near Sukabumi, breeding endangered species, the others are his brother and father. They have a very organised tour leader and the trip they are going on is something like I had envisaged doing myself: walking over to the south coast and along the beaches and through to Pulau Peucang, then taking a boat back. However the sheer amount of gear they are packing for a four day excursion seems a little excessive. They even carry a toilet seat! Just watching the quality of the tour leader, Eja's, organisation, I'd recommend them for those wanting to book a trip without the hassles of arranging everything. Their website is here 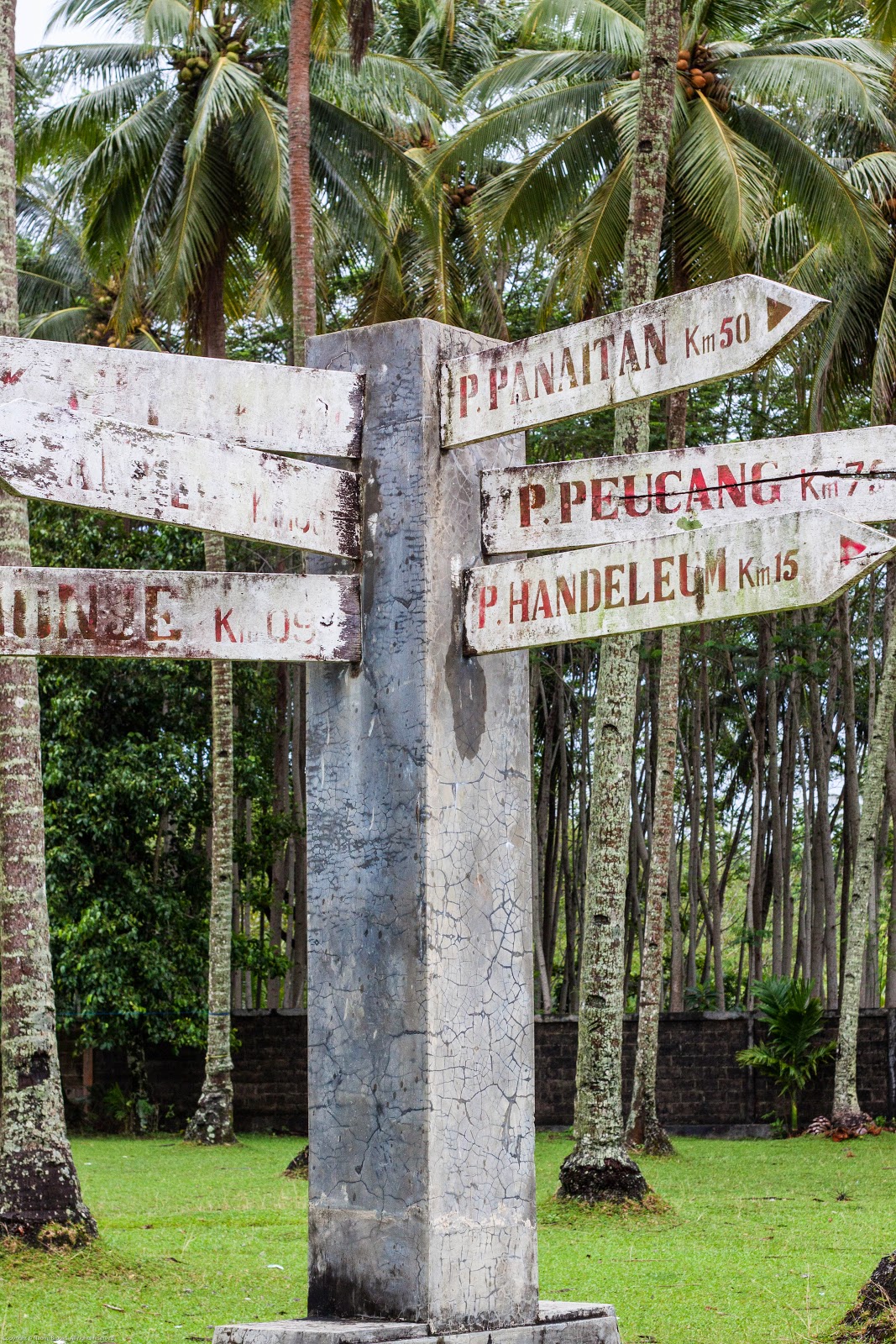 I wake up the next morning to much clearer weather. It didn't rain overnight and I can see the land on the other side of the bay. The sun even comes out. The German expedition leaves and I negotiate a price for my boat trip. It's not cheap, approx $160AUD, as the majority of the price is for the cost of boat fuel, and there seems little room for negotiation. Rather than reduce the price I get offered "extras" like going walking in the savannah land and on Handeuleum Island. It's actually not a bad price for one person, and since I've resigned myself to not doing the south coast walk it's perhaps my best chance to see some wildlife. 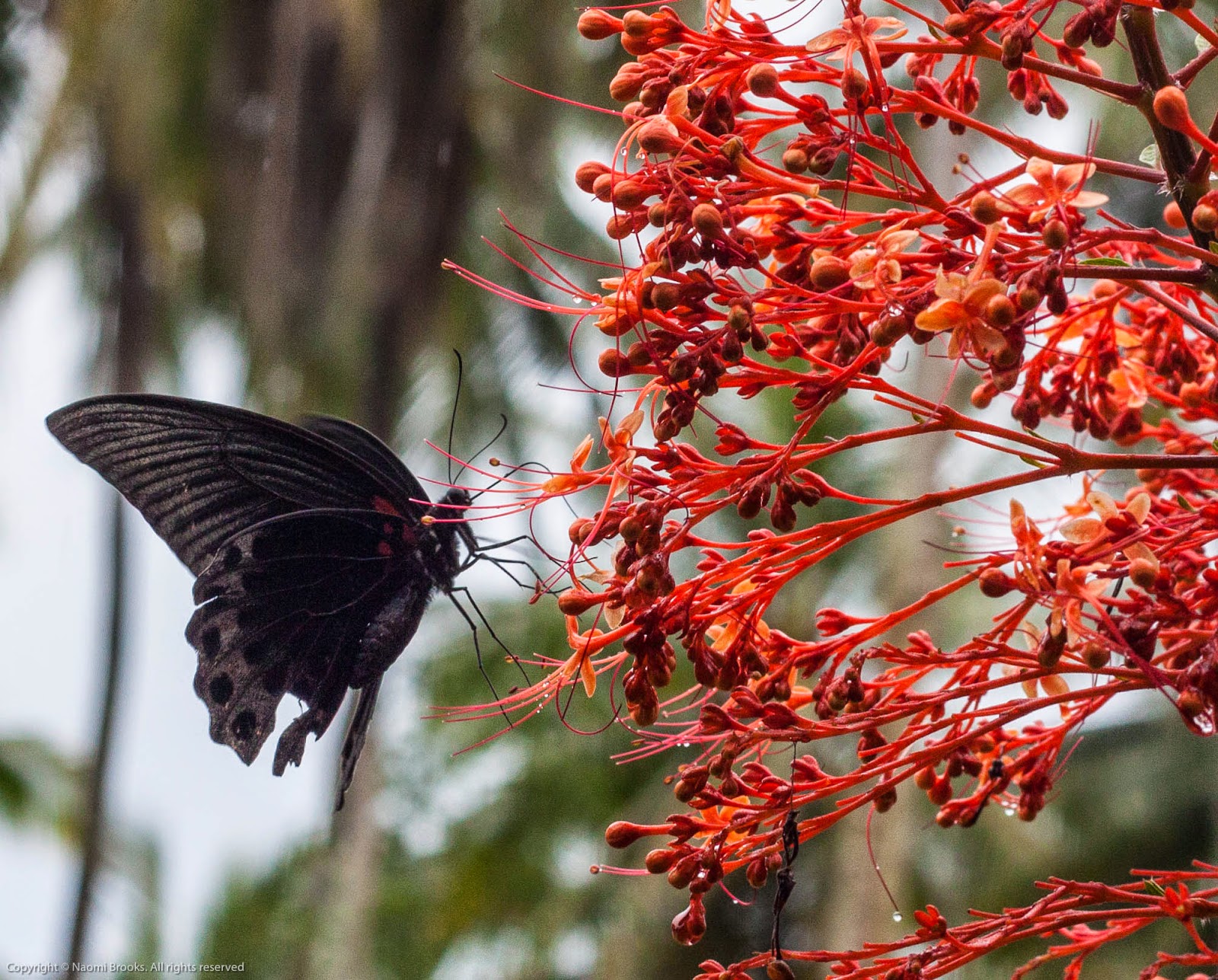 And then it starts to rain, really rain! Heavier than it has rained for the last 2 days. Rather than get soaking wet, we cancel the trip, and hope for better weather tomorrow. I settle back into my book all about the eruption of Krakatau in 1883, and watch a couple of movies on my computer. The rain clears again around 2:30 but the skies remain dark and I decide against an afternoon walk, instead watching the boys play an impromptu football match on the lawn in front of the home stay.

The purpose of this holiday has always been to trial the concept of long term travel. It means a different mindset than one has when limited by time and with an agenda about what you want to achieve within that timeframe. I'm not overly concerned that I have spent a few days doing little, because in fact I've spent some much needed time reviewing and editing photographs, something you shall all appreciate I hope. I've also had some interesting conversations, including one about religion and politics, and even about the asylum seeker issue. One of the boys told me he'd seen a bunch of men, women and children in 2009 whose boat sank off Peucang Island and they had to swim for safety. He gave them what food he had and said he understood why they fled and didn't like how the people smugglers took advantage of them. He believed that if no-one would take them in, then they would probably kill themselves rather than return to their country of origin. Now if a young man from a small village in West Java can have that much compassion and insight, why do a few million Australians not care? 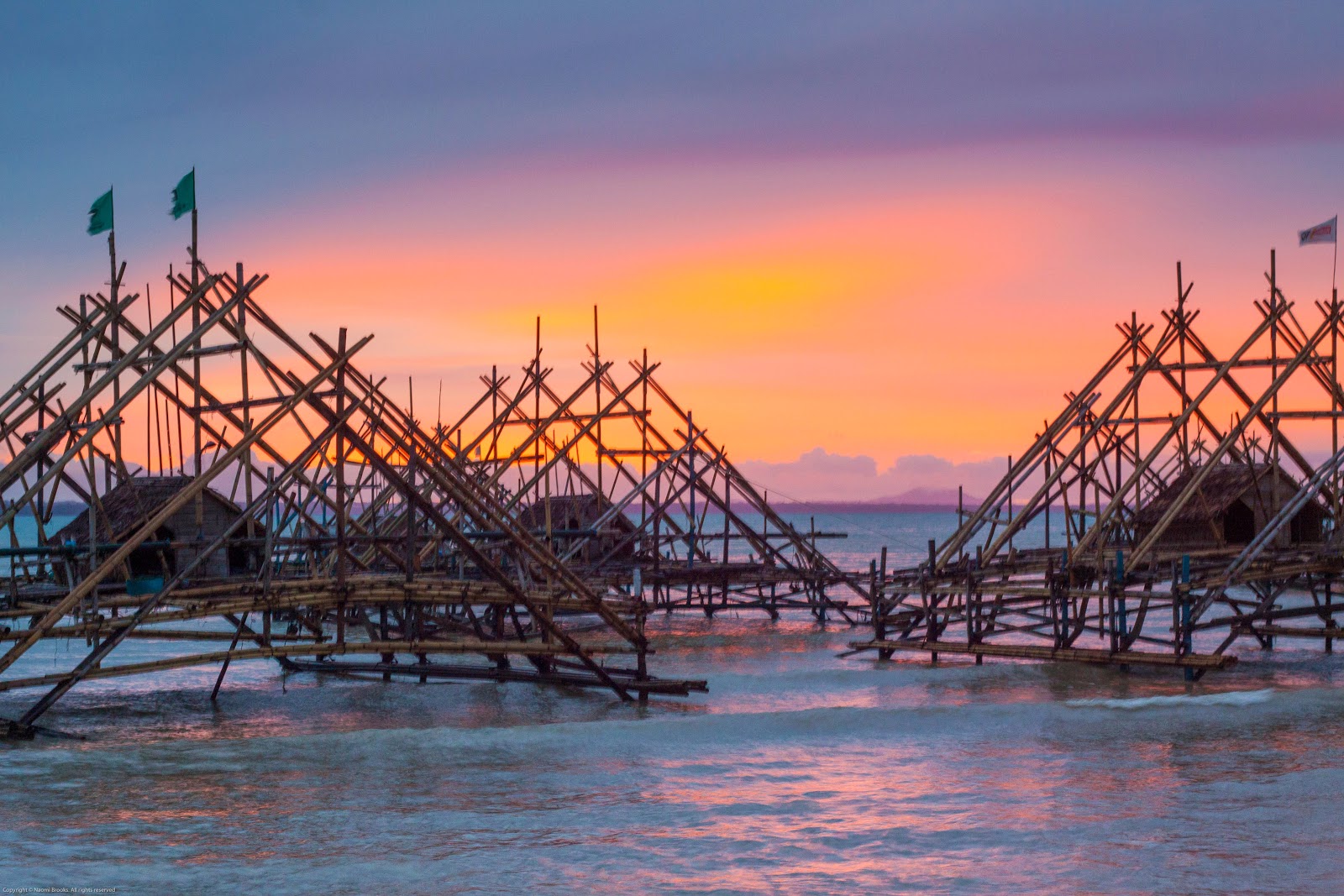 Finally, on Tuesday, the wind and weather clears and my boat trip is a goer. The price also comes down because I am now going to take a smaller boat. 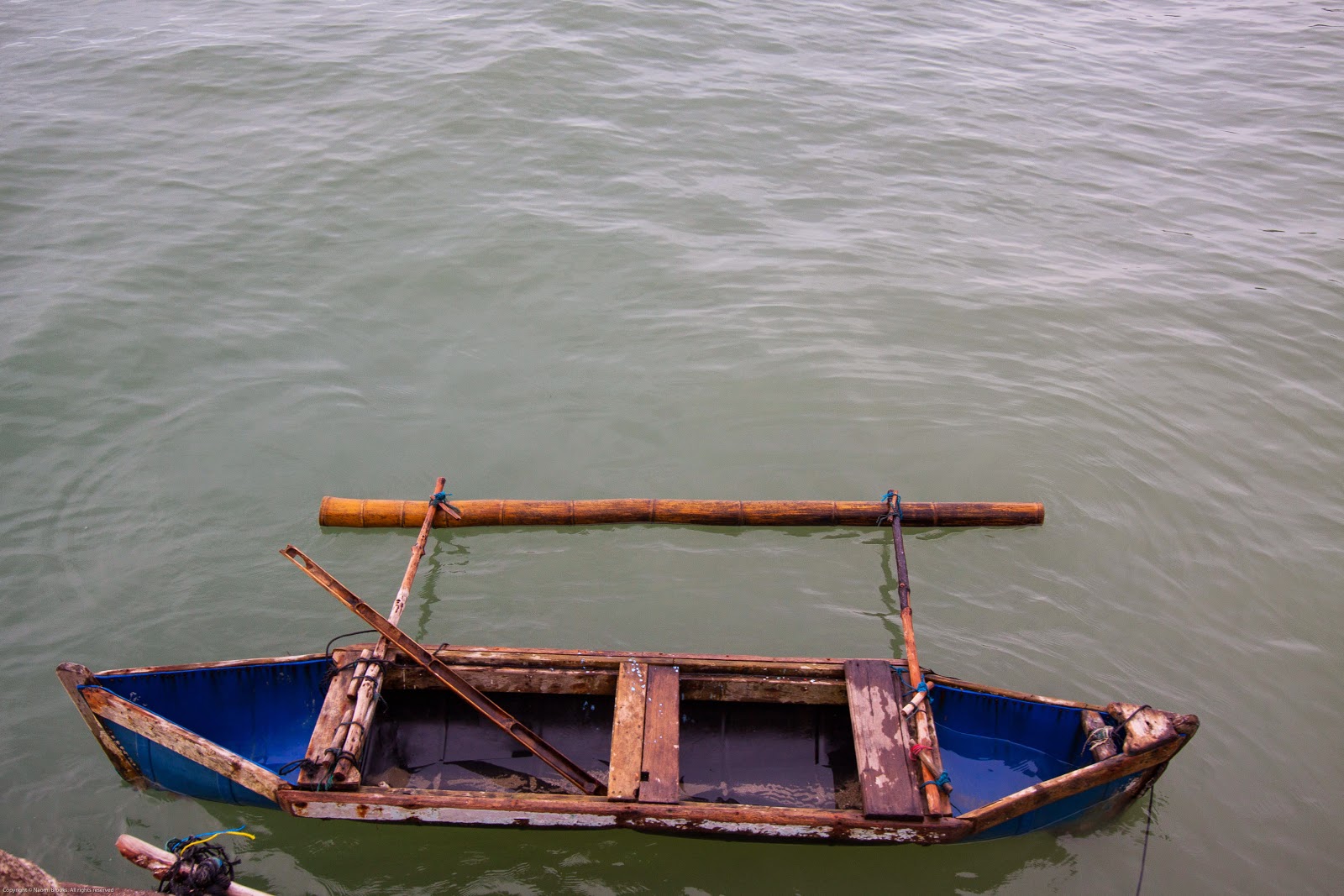